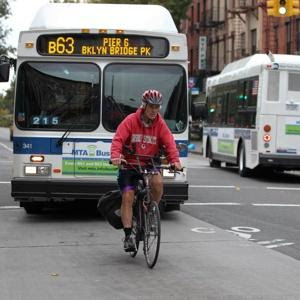 The bike lanes on a narrow, busy Brooklyn thoroughfare have led to more slammed brakes and near-accidents than double-parked cars, according to angry bus drivers — and the city still wants to extend them.

The lanes for cyclists on Fifth Avenue in Park Slope — which opened several years ago and have become increasingly popular in the crunchy enclave — routinely cause problems along the B63 bus route, say drivers.

“I have close calls every day,” said B63 bus operator Darren Davis. “It’s a recipe for disaster.”

The bike lanes — between 23rd and Dean streets — leave little room to avoid opened car doors or bikes that come whizzing out of nowhere, Davis said.

“Nine times out of 10, you can swerve around, but here, there’s nowhere to go,” he said.

Some of the lanes are protected — meaning they are sectioned off from regular traffic — while others are what are known as “shared paths.”

Who cares about mass transit riders? People on two wheels need to get somewhere. In all seriousness, though, bus and bike collisions are on the rise.
Posted by Queens Crapper at 12:12 AM

Why is this fool even bothering to wear a bike helmet?
There aren't any brains to protect in this hipster's skull.

Hey, why not on top of the bus, like high line! (toungue in cheek)