He learned the hard way that red means "stop" 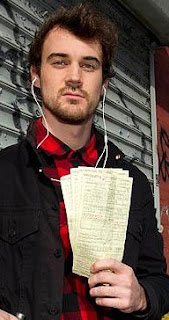 An avid cyclist says he’s the one being taken for a ride after getting slapped with a whopping $1,555 in fines for a single traffic stop in Brooklyn last month.

Bushwick artist Daniel Greer, 24, who admittedly went through three red lights while wearing headphones, said he did not at first realize he was being pulled over near Lorimer and Grand Sts. on his bike ride home from his photography assistant gig on Sept. 7.

He was hit with four tickets and pleaded guilty because he thought the fines would be in the $700 to $900 range, he said.

So Greer answered the summonses by mail, checking off “guilty” to the offenses cited during the Williamsburg stop.

But he said he was stunned to get a Sept. 28 notice asking for about one-tenth of his annual income.

The red-light tickets worked out to cost between $190 and $940 because he was considered a repeat offender after running the first one.
Posted by Queens Crapper at 12:40 AM

Music to my ears !
$940 in fines is not enough IMHO for what this menace did ?
3 red lights, IPOD, Headphones ? I mean come on, how dam stupid can someone be ?
Photographer's assistant" as opposed to an "artist" ?
This crybaby must be from Iowa or Georgia. That or related to Diego the hipster "photographer" who got beat up with an umbrella on Starr street.

Cyclists who run red lights and stop signs seem to think that they have the right to risk their own safety. They don't realize that their actions might cause others to get injured (e.g., if someone swerved to avoid them). They also don't think about how a driver would feel if they hit (and maybe killed) them.

Maybe this little hipster "artiste's" parents
will pay his fine.

I'm with you Joe.
I suggest that his bike should be impounded.

Great. He deserves hefty fines. This past Saturday night in Williamsburg, he or others who look like him were out on their bikes, wearing headphones, blowing past stop signs and traffic lights, and generally behaving in very careless and stupid ways while riding on dark crowded narrow streets.

I almost got hit by
one of those light jumping cyclists while crossing!

That smug hipster deserves getting hit with those fines.

If a cyclist is 18 years old, he should be licensed
(with number plates...back and front) and be required to carry liability insurance.

One down, one hundred thousand to go.

I'm with ticketing these cyclist morons that need to learn the rules of the road, but that is a batshit ridiculous amount of money in fines.

Has anyone noticed how many new traffic lights are going up all over the city? Compare them to the number of new trees planted...

Bloomberg's NYC doesn't want to raise taxes, so they get you on tickets instead.

I'm glad the system is starting to work by serving fines to the reckless cyclists that endanger not only themselves but others as well.
They should have license plates and pay a permit just as cars and motorcycles.
The mayor have given them too much space neglecting the pedestrians and runners throughout the city.

Yeah, everyone here is for the ticketing of cyclists until it is their little angel being ticketed. Then, the cops are donut munching summons whores, trying to make their quota. Hey, summons every traffic violator in the city I say. But just don't complain if a cop catches you doing that one little thing you think is ok because you always get away with it.

Awww poor baby.
You people are being far to kind.
What this guy needs is a hug and a high four...in the head.....with chair !

My friend Brigid got hit by a cyclist on the Brooklyn bridge last week. She 5'1 90 lbs and got hurt bad. $890 emergency room fee 3 broken ribs and a broken wrist from the slam to the ground
The guy didn't even stop, not a cop in sight. No license plate or tag number, these bikes need hard bolted tags and liability insurance

From the perspective of a cyclist, it is much safer to go through a red light when there is no cross traffic coming, than to wait at the red light and accelerate from a stop with multiple cars buzzing past you within inches, or passing you to cut you off to make a right turn.
When making a left turn, it is much safer to do so when there is not cross traffic coming, even if the light is red, than to stand in the middle of an intersection with traffic coming from in front of and behind you.
It may not be legal, but it can be much safer to pass red lights than to wait at them in many instances.

It's funny how many think that going through a red light on a bicycle is automatically careless and stupid, yet I would bet the same people routinely jaywalk and 'foolishly' cross against the light. Some of them probably do it while yapping on the phone.

If they gave any driver here three tickets at once for changing lanes without signalling, they would be in an uproar about it.

"at once" ?? ---more crap from the east of the Hudson peanut gallery.
Where and what time in NYC can you even try to change three lanes at once without having to apply brakes or stopping ?

These cyclists and health-nut assholes want to be treated like motor vehicles taking up taxed lanes of traffic I pay for with DMV fees but not when it comes to traffic law and violations.
F_ all these 2 wheel terrorists ! Make them DMV register, tags and buy insurance....enough with this "Free for All" to many innocent people on foot and cabs are being injured and having to foot the bills

"Where and what time in NYC can you even try to change three lanes at once without having to apply brakes or stopping ?"
I meant if the cop followed you and waited until you changed lanes three separate times without signalling before pulling you over, and then writing three tickets. Maybe if you read the story I wouldn't have to break it down for you.

If you think your $42.50 to the DMV pays for the roads you have a seriously poor understanding of how things work. That fee most likely does not even cover the administrative costs of running the dmv.

The really sad part is that you consider bicycles terrorists on wheels, and fret over damage to cars. Maybe you should look up how many people are killed by cars in NYC every year, usually by them being driven carelessly or recklessly. Wait, that's not a concern because the cars are insured and pay their DMV fee.

Actually, you didn't have to read the article. If you read my comment you would have realized what it was supposed to mean.

The cop didn't wait to pull him over. The jackass had his headphones on and didn't know he was being pulled over and broke the law twice more.

Or he saw a cop car going through the red lights also and thought nothing of it because it's a routine occurrence.
Sorry, no headphone is going to block out the whooop from a police siren, especially now that they have those vibrating whooops that had to be put in to be felt by people with sound systems in their cars who are oblivious to even emergency vehicles.

It is thought of as so foolish to ride with headphones, but many cars are designed to block out outside noise, and people listen to the radio within. Why is it so dangerous to ride a bicycle while tuning out outside sounds, but driving a 3k lb car while blocking out the outside sounds is perfectly acceptable?

Inside Central Park, cyclists never, NEVER, stop at the red lights. Cross the road at your own risk.

It is thought of as so foolish to ride with headphones, but many cars are designed to block out outside noise, and people listen to the radio within. Why is it so dangerous to ride a bicycle while tuning out outside sounds, but driving a 3k lb car while blocking out the outside sounds is perfectly acceptable?

Y'know, I'm a lifelong biker...from the spring to fall, I bike a lot, sometimes over 100 miles a week.

I went on big bike tours (one was almost 800 miles long) and competed in a few races when I was in my teens. Really, there are few things that I like more than biking.

However: the very first thing that I learned - the #1 rule of biking - is to BE AWARE OF YOUR SURROUNDINGS.

It's exactly the point that you are not a 3 Ton vehicle racing down the streets...you are a 150 lbs. bag of flesh on a piece of metal with two round things taking you from place to place on streets that have very fast and heavy death-machines zipping around.

I'm so fucking tired of listening to bikers who are constantly breaking the law and then moaning about how unfair the world is.

BE SAFE - DON'T BE STUPID! And, for crissakes, don't wear headphones when you're biking. That's how you die.

I think we are all tired of bikers doing foolish things like riding with headphones, high heels(!), flip flops, driving at night with no lights, blowing lights when cars or people are crossing etc. However- Those fines are so excessive! There are some jerk cops who pile fines on one traffic stop but that is outrageous. 3 lights at once seems different than 3 separate times of being pulled over, warned that your behavior is unlawful and then repeating the bad behavior.

The hate against people who get off their couch is evident once again.

Actually, your hate for people who do something other than ride bikes and whine is evident.

If the hipster can afford piercings or tattoos, he can afford the ticket too.

I see that Joe agrees with me on license tags
and insurance for cyclists.

Bravo!
Somebody else has some common sense.

Fine that hipster biko into bankruptcy!

What a dorky looking doofus!

Have to go to Bushwick this week scour some hardware stores for vintage faucets parts and Circo's cookies.
For my friend Bridgid who was badly hurt by one of cyclist idiots I will popping the first about to dodge or bump me on the sidewalk right in the face.