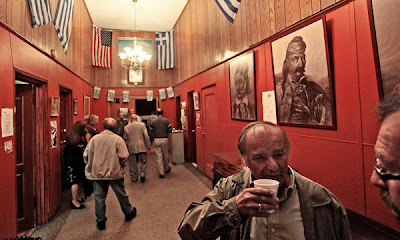 The evidence was elusive: late last month, a professional Web site suddenly appeared, showing the party’s swastikalike logo set against a dark Manhattan skyline and calling on the city’s Greek diaspora to donate food and clothing to a charity drive to benefit struggling poor people in Greece. There were pictures on the site: one was of a group of men with their backs turned to the camera, wearing black T-shirts reading, in Greek, “Golden Dawn New York.”

Although the site went down within days of its emergence — targeted, it was reported, by Anonymous, the hackers’ group — it provoked sufficient outrage that local politicians, doing what they do, rallied at a news conference to condemn the right-wing party, and a grass-roots protest movement sprang up in an effort to oppose it.

The problem was — and, indeed, still is — that almost nothing is known about the party’s actual presence in the neighborhood. Does Golden Dawn really have an office in Astoria, the center of the city’s Greek community? That is not clear. What are its goals? Also unclear. Is its membership significant or minimal? No one knows for sure.

...a phone call in search of some specifics to Peter F. Vallone Jr., the local city councilman, produced an e-mail from a spokesman saying that Assemblywoman Aravella Simotas, who represents Astoria, knew more about the group. While trying to be helpful, Ms. Simotas said, “I only know a little — and it’s all secondhand.”

What if they do? You can't legislate against free speech. The pols in this town, and everywhere, for that matter, LOVE to play on people's fears. We have Latin gangs, neo-Nazi skinheads, Black Panthers, Al Qaeda, the City Council, etc. in this town. So what is the big deal about adding fascist Greeks to the mix?
Posted by Queens Crapper at 12:17 AM

You can believe whatever you want in this country, but once you make turn those beliefs into action, that's where the problem occurs.

Greek Nazis??!! From Communist Greece? LOL!!! All 7 of them? I'll let you know when I start to lose sleep.

1, Why call Vallone - this is not a development issue.

2. A small group goes apeshit over this trivial issue while turning their backs on the community slowly strangling from over development and the growing influence of riff-who are destroying its character.

3. The Occupy Astoria guys think this, along with drones in Pakistan, Stop and Frisk, and starting new banks are exactly what Astoria needs to focus on. Good example as to why the Left is becoming irrelevant.

The media has hand in this. Anything linked to "Nazis" is good for a headline. As for the political hacks, it's feigned outrage and a distraction from the city's real problems.

I think that the politicians
are making hay over all of this fear mongering.

That's for certain. Give a pol a cause to protect his constituents from. and he comes out a hero just in time for re-election.

I fear the Vallone mafia much more than I do
the Greek's Golden Dawn.

Look at the damage La Famiglia di Vallone has done to our borough since the old days of Charlie "the judge" Vallone.

We have a former Black Panther named Charles Barron ON the city council who once publicly stated that he'd like to slap the nearest white person.

We also had a bunch of Al Qaeda wanna-bes in Jackson Heights who are so tough that they threatened a self-described "conservative lesbian":

Funny, I don't recall the NY Times making a fuss or even bothering to report on that incident, I wonder why?

Maybe because the villains didn't fit the NY Times playbook?

Aravella only speaks when Gianaris tells her to. And she only says whats been scrpited.

Nobody pays strict attention to the Times like they used to. They're behind the times. They have their own agenda. They have ceased to be the reputable "paper of record" that they once were.

The Russian fascists taking over that country should be the real fear.

the dictator ,one party majority dem/prog. machine in nyc ,is mostly functioning from prison cells and they distract by scaring the voting public with "Greek Nazi's ?

Of course!!!How can we be so silly to believe that this is anything but a liberal plot? You've seen right through everything!!!

More seriously, do you think everyone is as gullible as you, who believes every bit of paranoid nonsense from the fringe of the right wing?

The Greek religion gave birth to communism and islam because they reject Original Sin. Why else would all the priests in bankrupt Greece get paid by the government? The only thing that idstinguishes Greek Nazis from comminists is the Nazis go to church and make their women wear burkas. They have no idea what free markets are.

All the Greeks refer to themselves by the nazi term "homogeny". They don't see themselves as immigrants but as colonists, planting Trojan Horses wherever they go. When will Simotas and Gainaris repudiate that?

kudos to Tony Vassillaros,"THE COFFEE KING" and a true salesman and nice guy.

You do realize Aravella Simotas is Greek. A hardcore Greek. The Greek vote placed her where she is today.

You think we have short memories, don't you?

Aravella Simotas ran unopposed because the Vallones made deals with the other 2 candidates who were running. Old-fashioned tweeding put her where she is today, not the "Greek vote."