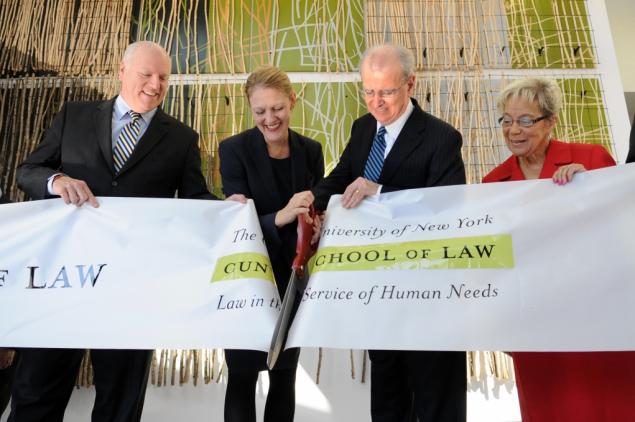 The state’s top judge has delivered his ruling: CUNY School of Law’s new location in Queens is a boon for the judicial system.

The school completed the move from Main St., Flushing, to the up-and-coming area of Long Island City in the shadow of the Citigroup Center. Large-scale tenants such as JetBlue and the city Department of Health have re-shaped the western Queens landscape, transforming the neighborhood from its gritty, industrial days.

The building was formerly a training center for Citigroup, but the Great Recession created an opportunity for CUNY honchos to pounce on the prime location, said Iris Weinshall, CUNY’s vice chancellor for facilities planning.

Isn't it funny how the Machine's buzz words were used in this article?  "Up-and-coming"  "gritty" "landscape."

It was better before it was forcibly gentrified, when people could afford to live there and businesses could afford to operate there.
Posted by Queens Crapper at 12:07 AM

their favorite anthem is "the internationale"

Look at "Virginia" Joe...all smiles...then it's a quick jet ride back to his home in "Ol Virginy".

FYI:
The Bland Houses are named for the composer of the tune, "Carry Me Back To "Ol Virginy".

See..."Queens Crap" has educational value too.

Hey, leave Crowley alone. Commuting over long distances every week, back and forth, can wear a guy out.

PS Does Marshall even know where she is?

the statement by Iris (wife of Chuck Schumer) should have read (DEPRESSION). Four years of 10.5 to 15% unemployment and underemployment in nyc and nys is unacceptable.

what is her pal
,former Citi -Bank president Robt.Rubin and Obama advisor doing now ?Citi-bank was one of the greatest lenders to the subprime freeloaders (NO INCOME,NO ASSETS,NO JOBS) NINJNA.

Another law school opens in a lawless borough.

This city has more law schools than any other in the country. Here's hoping they all find jobs upon graduating.

Those who think that the past 10 yrs were bad, should take note that the debt cycle is reaching the end. The creditism established during the Nixon and Ford Administrations has led to economic and asset bubbles, and unsustainable debt at the household level. Government debt and future obligations at all levels is an 800 lb gorilla in the room. Horrible policies compound this.

Gov. Cuomo had a hand in the housing catastrophe as the Housing Secretary during the Clinton Admin that green lighted loose lending policy at the federal level. The supposedly conservative Bush wasn't conservative when it came to sound economics, as he let the federal mortgage support run like a fully open fire hydrant.


YOU HIT THE NAIL ON THE HEAD, AND THAT'S NOT EVEN HALF OF IT. WHAT ABOUT ALL THOSE GOVERNMENT LOANS? GOVERNMENT MAKES NO INTEREST, ACTUALLY LOSES MONEY, AND THEN THESE MORONS CAN'T GET JOBS AND DON'T PAY TAXES.

Joe Crowley shows up in Queens, just barely in LIC!