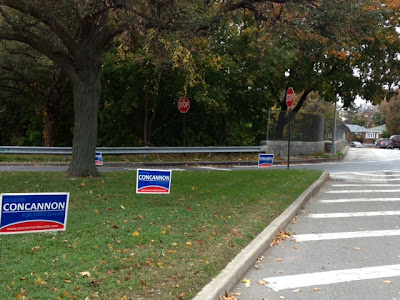 "Here is a prime example of yet another ass-piring politico who wants your vote ladies and gentlemen. 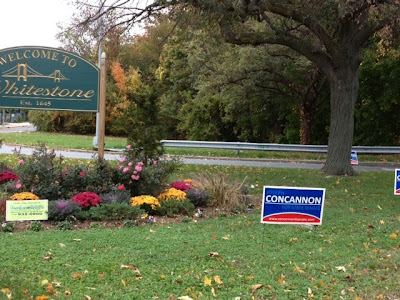 Being around the political scene in northeast queens for some time now. I anticipated "the candidate had no idea, we have no control over our volunteers, we will remove them immediately" response. So I, along with a couple of my neighbors called the campaign office and were given that exact answer. The three of us, on different days no less. 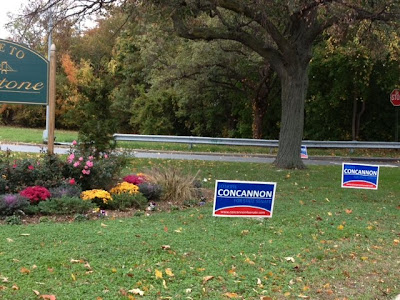 Then we drove around the "St. Greg's" area, aka Bellerose.
Guess what we didn't find?
You guessed it!
Not one sign on any public space!

So why is it that Bayside - and as these photos illustrate - Whitestone, are being dumped on?

The first call went in on Tuesday. We were told they would be removed that day. The signs weren't removed until yesterday. What took so long?

I know, we could have taken the signs down ourselves. Then that would be yet another citizen cleaning up a politician's mess wouldn't it?"

Show me an honest politician and i'll.... ah whats the point.

Anyone who has had the unpleasant experience of meeting Concannon, knows that Crazy Joe's elevator doesn't go all the way to the top floor.

Bet you Concannon's supporters would complain if these signs were being pulled out.

One would suspect that Hurricane Sandy is doing the job now, though.

Between "doofy" Dan Halloran and "crazy" Joe Concannon...this pair feeds the old stereotype of the Irish being full of booze and blather.

What an embarrassment to Ireland.

One of the most hated cops in the 112 pct of all time. A real jerk. No wonder the PBA endorsed his opponent.

To think he worked on copstat when "worked for the Giuliani administration". Fudged some numbers?