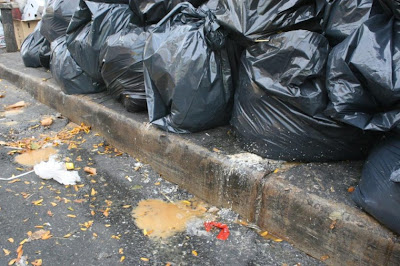 From the Queens Chronicle:
Flushing stinks. A potent sour, fishy, and greasy stench lingers in the air, which residents and visitors say is unique to Flushing.

The problem is most acute along Flushing’s Main Street, between 41st and Sanford avenues, according to Marilyn Bitterman, district manager of Community Board 7. There are at least two supermarkets, a couple of grocery shops, and a dozen eateries on the short 750-feet stretch.

“Flushing soup” is what some residents call this yellowish, gooey accumulation in potholes, resembling bowls of broth on the streets. Pedestrians avoid them like the plague. But when the streets get crowded, as they always do, there’s no hiding.

Residents blame the supermarket and restaurant owners for disposing their garbage improperly and possibly breaking the law.

All liquid should be filtered through a “grease interceptor,” where wastewater flows down the sewers, while oil and grease are separated, collected and recycled by a private contractor that comes once a week, said Fon Mooi Chin, owner of Malay restaurant.

The eatery changes its $1,100 interceptor every five years, and its filter every two years, according to Chin.

To avoid having to service the interceptors, some restaurants simply stop using them. But discharging grease directly into city sewers violates Sewer Use Regulations, which carries a fine of up to $10,000.

Department of Environmental Protection figures show that from 2008 to 2011, approximately 400 notices of violation for the maintenance of grease interceptors were issued every year citywide.

This can't be. According to our comptroller, Asians don't dump grease in sewers.
Posted by Queens Crapper at 12:40 AM

Downtown Flushing is a cesspool. Walk into any Chinese grocery and it makes the dirty streets seem like roses; sour milk and fish smell that would knock you over.

The area is a lost cause. We should cede it over to Beijing and let them Try to clean up this filthy third world shanty town.

i'm mobility impaired and my Rheumatologist is in that zone.I hate like hell going there in the summer on account of the " Flu Shing Gravy" that can sneak up on you very suddenly.Esp.with folks "hocking oysters" with relative impunity, it pays to be mindful of your footwear as well as your steps!

The creator of that very descriptive term
"Flushing soup" deserves a prize.

I've long referred to the stench rising from those
same filthy streets as "Eau de Flushing".

Maybe Calvin Klein can bottle it.
A dab behind a woman's ear could revolutionize
her possibilities.

Do you really think that groups of tourists
would flock to Main Street until the unappetizing conditions in this town are cleaned up?

Of course, this is all bad for business!

Flushing BID--what do you intend to do about it?

If you are going to believe
a greasy crook like John Liu,
that Asians don't dump grease into sewers,
the Queensborough Bridge is for sale.

Do you want to buy it?

I've already slipped a couple of times
on one of those Tuberculosis (?) germ ridden
"sidwalk oysters" or "snot rockets".

And it is dumped into the subway vents as well.

The Flushing BID is a sham run by the Chinese.

None of the opposing tongs have,
or ever will, cooperate with each other to clean things up in this foul cistern.

Even the inscrutable Wellington Zhou Chen
once described Flushing in the press as,
"A crappy little Chinatown".

Maybe some dismembered (human?) body parts,
that weren't suitable for stir fry, got dumped there too.

A 50 gallon oil drum
isn't the only way to get rid of mob hits.

Compared to Japan Towns and Korea Towns
all over the world...
China Towns are always the most unsanitary!

Climbing up the stairs to the westbound side
of the LIRR station on Main Street is a real experience.

You first have to pass through
one of the filthiest streets in town...oozing with
"Flushing soup"....and that nostril searing stench!

When you finally get up (gasp)
to the platform...you have a wonderful rear view of a shoddily built grouping of residential slums...rusty ductwork and graffiti scrawled rooftops.

Cb#7's chair, Gene Kelty, rants and bellows,
but little change for the better do we see in Flushing.

CB#7's Chuck Apelian continues scoring lucrative printing contracts (some from Asian developers)
for his company while enjoying the good life in his cul de sac far north of all this crap.

Nice work if you can get it!

It's amazing, all these food tv shows that gush over Flushing's "rich, diverse cultural culinary experience" never seem to mention how these places look from the outside, with their mounds of toxic, smelly garbage.

It has been creeping along since the 1970's, gradually until the sights and smells can no longer be ignored.

This would not be tolerated if it appeared overnight in any other part of the city.

But you are as likely to displace this from Flushing as you are from Chinatown.

In Switzerland, garbage is stored underground and sanitaion uses overhead cranes to remove it.

the Queensborough Bridge is for sale

Bloomberg already bought it and gave it to Ed Koch.

"Forget it Jake, it's Chinatown"!

If NYC would continually blitz these lawbreakers
with big fines for the unsanitary disposal of their garbage, it would stop!

Ahhhhh,
but no politician would think of offending these
Orientals!

There would be an outcry of, "Anti Asian"!

Then, where else would these shady pols get their campaign $$$$$$$$ from?

They're obviously Orientals themselves, and choose
to turn a blind eye toward the situation.

In Floo-shing, the only thing that stinks worse than
its streets are the crooked self-serving pols that are supposed to be representing the area!

It's CB#7 that stinks to high heaven!

It's one of the worst
community sell-out boards in NYC!

Who comprises its ranks?

The lazy; the egotists; the old and out of touch;
a few assorted big mouths; a crook or two; (gag) etc.

Dump this board and start all over!
Better yet...DUMP ALL COMMUNITY BOARDS!

They're a waste of taxpayer dollars.

Oops, then where would Marilyn Bitterman go to collect her $120,000+ government welfare check?

Uh, fella...
the Queens Tribune just did an article on the vast
discrepancy between NYC's various community boards' district managers.

They have Marilyn Bitterman's yearly salary listed at about $95,000.

She well deserves it too considering that CB 7 is the largest board in the city...not to mention the workload she has to deal with.

I don't think that Q Trib article is accurate.

I believe two staffers retired from CB#7
and their salary was added to Bitterman's making it about $120,000 per annum.

It should be a matter of public record listed online.
Let's all have a look.

District manager of CB#7, Marilyn Bitterman,
has recently been quoted in the press
saying that conditions have improved greatly since the Flushing BID.

Somebody has got to remove their head from their ass...take a good look around Flushing and smell the real shit!

I was just told (if I understood it correctly)
from a former NYC official's staffer, that DEP could fine each offender up to $10,000 per violation.

Why isn't this being pursued?
That's a lot of greenbacks for NYC during its economic downturn.

Who is protecting who...or who's job?

Community board 7 should be kicking the Flushing BID in their royal asses to push the DEP into doing the job they're supposed to be doing!

FINE THOSE POLLUTING BASTARDS TO THE MAX!

That will put an end to the filth and stench
in a New York minute!

Councilman Koo is just enjoying the good life
in his Port Washington home with his thumb up his moon gate!

There is no REAL FUNCTIONING government
in the downtown hub doing ANY kind of job besides pols doing their jobs seeking re-election!

And if ANYONE dare criticize CB#7 at a public meeting...by taking them to task on these shit hole conditions...one of the 2 resident big mouths (Apelian or Kelty) threaten them with eviction!

Flushing doesn't work because NOBODY is working together on it's BIGGEST problem!

Maybe Marilyn Bitterman has held her job too long and it's time for her to retire.

Maybe some more insightful district manager is needed who can skillfully manage this very complex neighborhood.

Maybe a younger
more energetic multi-tasker is the solution.

Maybe that whole "olde guarde" at CB 7 needs to go.

Whew...
now we'll get a load of defensive trolls posting...
for sure!

With all of the resources available through the...
DEP; CB#7; Flushing BID; various business associations; all of our elected officials; NYC's numerous departments.

WHY can't they eliminate this problem?

LOL!
That's because they're all too busy jerking off
in their separate booths.
Meanwhile WE get jerked around by ALL of them...
and in public!

That's the ONLY time you'll see any concerted cooperation in fragmented Flushing...when all of its politicians get together to gang bang us!

How can EVERYONE be in denial that the Chinese
seem to think that they are ABOVE the law?

I guess we have been told to leave them alone,
because it runs counter to our national agenda and policies of "not insulting the Chinese".

Back on the mainland,
the Chinese don't even give a crap about poisoning
their own infants with Melamine laced milk!

Why should they care about what they do
in the downtown Flushing dump?

There was also a quote in the recent press,
from a Chinese woman who left Flushing for Bayside.

She told readers that the squalid conditions in downtown Flushing are FAR WORSE than in China...her homeland!

SHE'S CHINESE AND SHE KNOWS THE SCORE!

So if she can see this...
then why is Marilyn Bitterman in denial...
saying that things are better since the BID?

Zhou's group owns the building that CB#7 is headquartered in!

It's way past the time for the FEDS to come in
and give Flushing a good flushing out!

Corruption abounds here!
It's the epicenter for fraud and kickbacks.

The political vipers maintain a loose control,
in partnership with the tongs who facilitate the transfer and laundering of overseas political campaign contributions.

If Gary Ackerman and his crooked crew, would be served federal subpoenas, you'd crack the whole ring that's been operating in Flushing for over 30 years!

Smart man to retire just before
the shit hits the fan and get him in the face!

Are you FBI guys following these leads?

There seems to be a lot of disgusted people
commenting on Flushing's filth.

WTF is the president and staff of the Flushing BID
being paid for?

It's clear that the Flushing Chinese Business Association condones garbage and fetid ooze
spilling into the streets....
because they aren't doing squat about it!

Chinatown was always the most unsanitary place in Manhattan. Now Flushing has it beat.


Conclusion...
the Chinese are not known for their cleanliness.

Scoop up some of that stuff...add some diced rat...
and voilla...you've got a piquant rodent bisque!

I AIN'T EATIN' NOTHIN' in Flushing I can't recognize!

Commercial and retail businesses must use a private carter to dispose of this wretched waste!

Funny - you don't see this in China!

Man! Liu has to stop using the term "Us Asians" and use the proper descriptor: "Us Chinese". It's only them who live like garbage.