Because what Queens needs is a 3rd proposed convention center 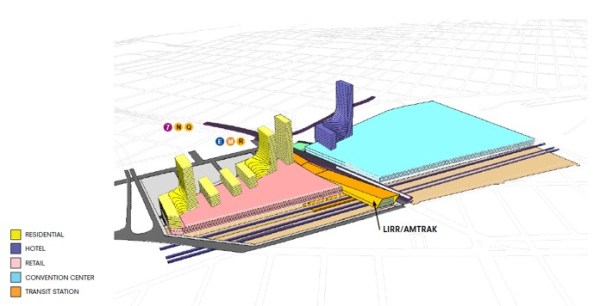 ...even though Mr. Doctoroff is no longer in command, might it still be possible to see a gondola stretch across the East River between Lower Manhattan, Governors Island and Brooklyn? Or a light rail line running the entire length of the waterfront from Astoria in Queens to Brooklyn’s Red Hook? Or, most audacious of all, tearing down the Javits convention center and moving it to yet another decked-over rail yard, this time in Sunnyside, where it would be surrounded by apartment and hotel towers and a sizable retail complex?

These were among the proposals Mr. Doctoroff put forward on Friday during a speech at the Municipal Art Society’s MAS Summit 2012. They were meant as examples for the next mayor to latch onto in order to “extend the achievements of the Bloomberg Administration by knitting new connections among emerging communities, amenities and institutions.”

Will this guy just go away already?
Posted by Queens Crapper at 12:18 AM

What Queens needs
is to be rid of malignant leftovers like Doctoroff!

The economic crunch will take care of these kind of pie in the sky proposals. Doctoroff is just passing wind.
These kind of egomaniacs always have to otherwise their heads would explode.

What Queens needs is a good carbolic enema!
Flush out ALL of its crooked, lazy incumbent politicians!

Then empty the load in a landfill on Mars!

The pols have plenty of money for development because they having been raiding your tax dollars for years confident that you will not make a noise out of your passiveness and politeness.

Your peasant ancestry shines through the generations.

Queens needs a rail connection to LGA, other than that, leave Queens alone for 20 years, you've done enough already.

What we need badly is a doctor to rid us of Doctoroff !

He's like a bad penny that keeps bouncing back.

What we need badly is a doctor to rid us of Doctoroff !

He's like a bad penny that keeps bouncing back.

CAN YOU IDENTIFY A SINGLE QUEENS POL THAT FEELS AS YOU DO? .... MAYBE EXPLAINS WHY HE IS STILL AROUND.