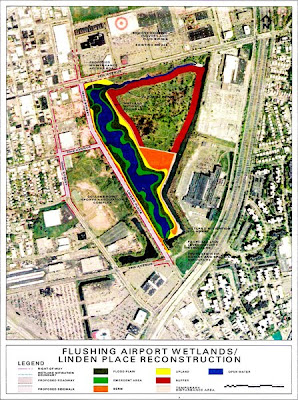 The construction of a crucial road in the fight against College Point traffic has been delayed yet again, even while the development of the College Point Police Academy has proceeded at a clip.

Community Board 7 has wanted a portion of Linden Place repaired since the late 1980s after the road was closed due to flooding about a decade earlier.

Civic leaders said the city Economic Development Corp. first projected the work would be completed about four years ago, but last Thursday found out the road is not slated for completion until 2014.

The first phase of the College Point Police Academy is set to be operational in December 2013 and will include about 900 parking spaces to accommodate commuters to the training facility just off the Whitestone Expressway.

Apelian, also vice chairman of CB 7, said the reopening of Linden Place is crucial to accommodate the increased traffic the police academy will bring, especially when other developments in the area are taken into consideration.

Several businesses from Willets Point were relocated to the corporate park, which is a special district designed to promote economic growth, and a new waste transfer station is set to open in College Point next year, where garbage trucks will drop off refuse.

Yes, that's been the Bloomberg credo since he was first elected. Is this any surprise? Shiny new projects that include ribbon cuttings and groundbreaking photo ops are cool. Low key infrastructure projects are not.
Posted by Queens Crapper at 1:15 AM

Uh Chuckie old man...I hope they plan to "supercharge" the new road...otherwise it will buckle and sink once again.

YOU ARE paving over wetland....a SWAMP!

If the road bed IS NOT properly reinforced, NYC will be repaving it for the next 1/2 century.

H-m-m-m....but maybe that's an idea. Paving contracts kick back a lot of $$$$$ that wind up in crooked pols' pockets.

LOL!
Reinforce the concrete with some of Apelian's thick rug
In Armenia, it's been said that even the rocks grow hair.

It is not only "they" who keep putting projects into the district, but YOU, Apelian. If the projects won't be supported by infrastructure, then you should have considered that fact before YOU voted to approve the projects. You failed to exercise due diligence, and now you act surprised by the predictable consequences. What a hypocrite.

What about the existing roads that are caving in from overuse? For example, have you seen the roller coaster that is the southbound Whitestone Expressway service road just south of Linden Place near Ulmer???

Q.
Why does Apelian approve so many projects?

A.
Because his Prestone printing company gets their printing contracts.

That wily Armenian carpet trader knows how to deal.
Yours and my interests are the last thing that "follow the buck" Chuck is interested in!