Farm Museum to tend to cemetery - if city buys it back 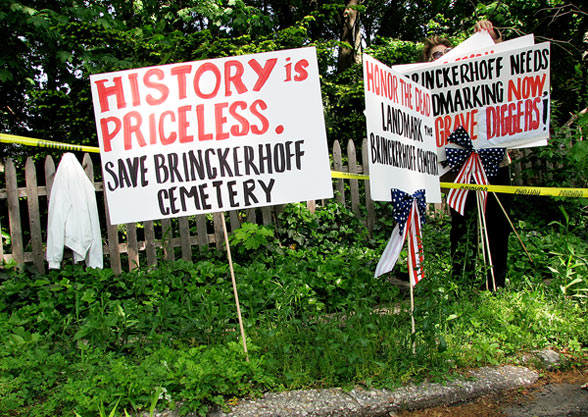 The Queens County Farm Museum board recently voted unanimously to maintain Brinckerhoff Cemetery, the centuries-old burial ground where several of Queens’ first settlers are interred, but would not be able to carry out the plan unless the property changes owners, Museum President James Trent said.

Trent said upkeep for the small lot on 182nd Street near the intersection of 73rd Avenue would be minimal, including keeping litter out, removing trees, shoveling snow on the sidewalk and cutting the grass between the curb and the fence – activities that would come at just a small cost to the museum.

He said otherwise the shared vision for the cemetery among a community of preservationists is for Brinckerhoff to remain largely as it is today, including missing headstones, except for perhaps the addition of a plaque or sign detailing the burial ground’s history.

But despite the vote to maintain the site, Trent said the future upkeep of the cemetery by the Queens County Farm Museum is not a done deal.

Although the city Landmarks Preservation Commission recently voted unanimously to designate Brinckerhoff Cemetery as a landmark, protecting the burial ground from development, the land is still owned by Linda’s Cai Trading Inc., which before the LPC vote had been arguing it should be free to develop the land.

Trent said that means presently the museum is not allowed on the land.

He said he would like to see the city step up and offer to acquire the property so it could be turned into a public space.

“The city did own it, the city was not supposed to have sold it,” Trent said. “And so really the city needs to take it back.”

The city sold Brinckerhoff at public auction to pay off tax debts in the mid-20th century.

Trent said it was unclear whether the cemetery would change hands in the near future.

“The people who own it, we don’t even know if they want to sell it,” he said.

Well, that is an important caveat.  But I'm sure after 12 years of doing nothing, Jim Gennaro and Toby Stavisky will see to it that funding is applied toward this venture.
Posted by Queens Crapper at 7:22 AM

Linda’s Cai Trading Inc? That doesn't even sound like a coherent name! Shouldn't knowing some English be a prerequisite to licensing a company?

Sell them all away. Isn't it hypcrissy to claim to be for more jobs when you oppose development?