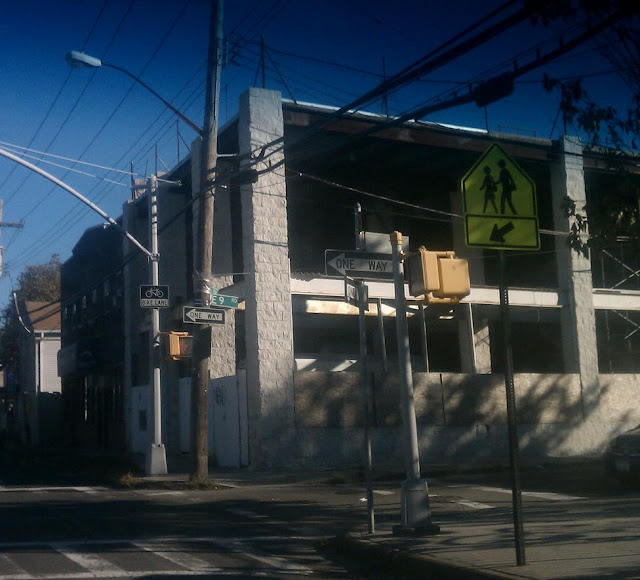 Here we are in Broad Channel on Cross Bay Blvd at East 9th Road. I noticed this building which had been started years ago has stalled out.

Looking on the DOB's website, we find that the property has had a couple of stop work orders in place since 2009. Both are for a defective/expired fence. But that seems like an easy enough thing to get resolved. Maybe there's another issue here.

Let's look at what is supposed to be built here. Permits issued in 2010 to developer/engineer Steve Chon were for a one-story retail building containing 3 stores.

Looks like the construction crew forgot to stop at one story. This is why there's a relatively recent complaint from 9/2012. I'm sure DOB will get around to inspecting it eventually...
Posted by Queens Crapper at 1:00 AM

At what point does the whole thing sink, and the second floor become the first floor?

Funny how its ok with city council that your parking meter is over 15 seconds and you get a ticket and a developer can go over a story for years and get a variance.

DoB hasn't sent anyone to inspect? That is worthy of a 311 complaint about the 311 complaint - copied to (ahem) the council member for follow-up...

DoB hasn't sent anyone to inspect? That is worthy of a 311 complaint about the 311 complaint - copied to (ahem) the council member for follow-up...

and needless to say reporting back to crappy on how your community board and city councilperson dodges the issue.

another one of those self-certified job. Amazingly, after 7 years, it has been audited yet! This Steve Chon probably is related to John Liu.