Failure to heed the warnings 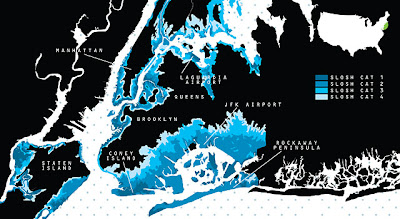 Oh and then there's this from earlier this year from The Capital:

But let's say, in a worst-case scenario, that parts of the city or one or some of its systems flood completely in an event like what planners call a "100-year storm" (a storm so severe its likelihood is estimated at one percent in any given year).

Many of them will not rate under the economic definition of "risk," because the value is too low. And this is where the standard risk-assessment falls apart: It is scientific and political; it does not factor in entire low-lying neighborhoods with low-rise housing under water.

Then there are infrastructure systems, which, compromised in one place, can spread mayhem far and wide. Water supply, sewage treatment, and energy supply, all built largely underground, mostly many years ago, are potentially vulnerable.

Bragdon said the administration is really beginning in earnest this year to assess risks to those three key areas. Any institution that has assets that could be affected by climate change is in his purview, which means not only the city's own, but those of private providers, like Con-Ed, which be a part of the process.

Imagine a scenario in which a 100-year-storm flooded all of the parts of the subway system that are most susceptible — the tunnels that carry trains under the East River to and from Manhattan, and the major connection points in Lower Manhattan. Then Brooklyn, Queens and Long Island would essentially be cut off from the mainland for the millions of commuters who pass through those links every day. And not for a short time.

The NY Times has a summary of the warnings.
Posted by Queens Crapper at 12:37 AM

They are now talking about building gates to keep out the rising waters like the have in London - further adding billions to the unwise development of brownfield riverfronts.

The damage to the Queens waterfront went far into Zone B - news the media will not look into.

But we do know what is happening in Toms River and Fairfield Connecticut far better than our backyard thanks to the media.

I'm so thirsty. Where does the line for the Kool Aid begin?

It's all a big mess. We are vulnerable - the storm could have been much more severe and hit hit direct - so what we had could be even more so.

The only way to have these warnings heeded is for the feds to stop funding the repair after these storms.

And all the yuppies care about is whether they can get a strong WiFi signal at Starbucks!

Even though these coffee emporiums were closed,
hipsters lined up outside to get their WiFi connection.

4G but no toilet paper for these assholes!

Two hotels closed? Check out the website and reservations for Z Hotel and Wyndham – both open less than a year and both outside Zone A

News starting to trickle out:

Note the video of LIC underwater water from Newtown Creek - all over the play ground equipment and school classrooms for the hispter kids!!!

i resent U.S.Senator C. Schumer's comparing a NATURAL DISASTER at Breezy Point ,Queens, N.Y. with the WWll Nazi German bombing of London,England and the U.S and Allies retaliation by the bombing of Dresden, Germany. When the Germans refused to surrender.

a very poor analogy. that was in 1943-45. i doubt if he was born yet. he could have used the Johnstown Flood,which was a NATURAL DISASTER where 2500 people drowned. the most deaths in U.S. history, at the time.that were not war situations.

i was, and my relatives risked their lives to save Europeans.

Crisis Over!
Broadway's back!!!

This will only accelerate the abandonment of the financial district by financial companies. "Wall Street" already is condos, restaurants, and tourists.

Anon No. 9: And that relates to Crapper's post in what way?

With few exceptions, local politicians are MIA as their constituents are in misery.

Shame on you for making a completely irrelevant point about a tragic event. You don't care about what happened in Breezy Point. You just want to vilify people whose politics aren't aligned with yours.

I was just informed by my cousin who lives in Long Beach, L.I. that her flood insurance deductible rose from $1,000 last year to a whopping $11,000 this year WAY BEFORE Sandy struck!

I think that only the super rich and foolhardy will be wanting a home near the river's or ocean's edge in the future.

They will become UNINSURABLE!

Let the rich live on the waterfront.... and their babies grow up on toxic brownfields and play in parks washed and soaked by the Gowanus and Newtown Creek.

They're capitalists. Leave them alone!

John Stoessel,Fox News has had specials concerning the water destruction of beach front homes and who pays for the replacement costs.he targeted his own property on Dune Road in Westhampton Beach.

he stated that ALL taxpayers pay for this through the federal government self insurance program?????