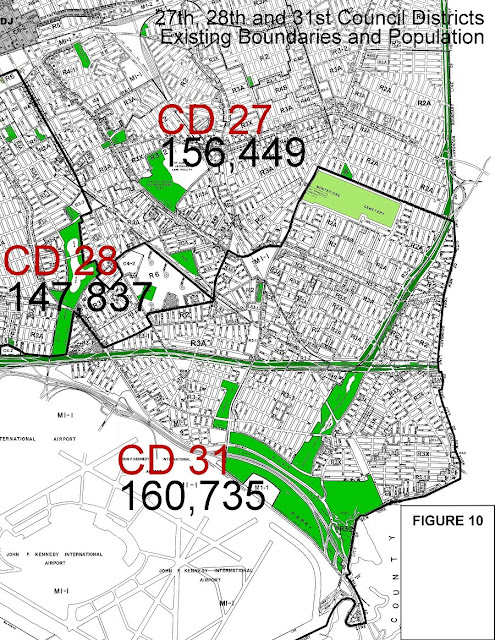 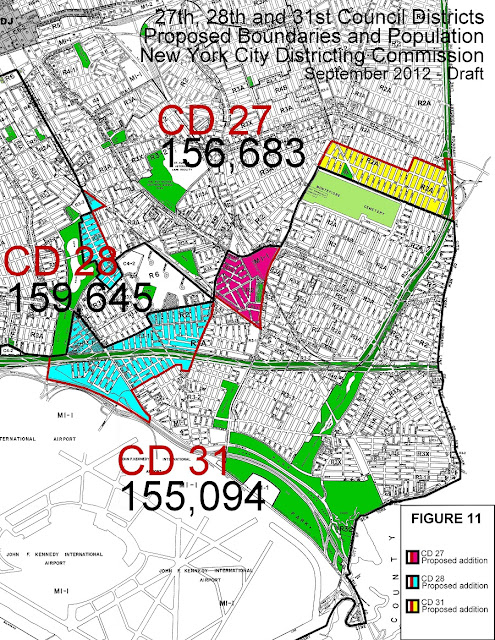 Significant portions of Springfield Gardens have been proposed by the Commission to be removed from the 31st Council District and placed in the 27th and 28th Council Districts (Figure 11). In particular, the 23 blocks of Springfield Gardens north of the Belt Parkway between Baisley Pond Park and Guy Brewer Boulevard proposed by the Commission should be retained in any new plan. Otherwise, QCC agrees with relatively few of these proposed Commission changes and believes that significant areas should revert back to their existing districts (Figure 12). 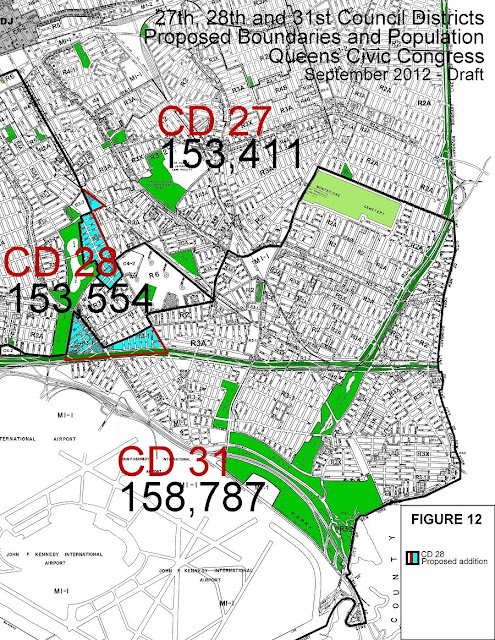 Area civics do not agree with the Commission's plans to move 32 blocks south of the Belt Parkway that are being proposed by the Commission to be moved to the 28th Council District from the 31st. The Belt Parkway acts as a major dividing line between these sections of Springfield Gardens; they are essentially two separate neighborhoods (Figure 13). Placing half of the area south of the Belt Parkway into a separate Council District will significantly weaken the ability for this area to have fair political representation and, frankly, cause an area already isolated due to its immediate proximity to Kennedy Airport and surrounding industrial areas to be even more marginalized. 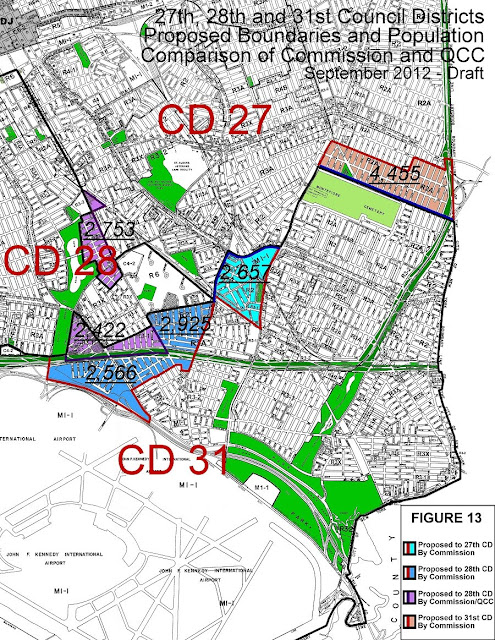 Similarly, two other discrete areas of Springfield Gardens - a 24 block area just west of Springfield Boulevard south of Merrick Boulevard; and a 25 block area south of Rochdale Village (Figure 13) - should remain in the 31st Council District for similar reasons, as they do not relate to other areas adjacent to them and have more "common interests" with the neighborhoods to the east. QCC believes that the Commission should reverse these proposed changes and have these blocks remain within the 31st Council District.
Posted by Queens Crapper at 12:45 AM

WE ARE ALL BEING SCREWED!

You don't need map quest
to discover that.

This map still has the unbuilt Nassau Expressway on it, cutting across the Idlewild marshes. I thought the I-878 proposal was killed long ago.

These are the official zoning maps from the Department of City Planning.

While the Nassau Expressway has been shelved, defunded and removed from the agenda of every agency and elected official, the Proposed Right-of-Way is still officially mapped by the city. No question that it should be de-mapped to make sure someone doesn't try to revive the highway plan.

The cutout of parkland for the logistics warehouse was done about 15 years ago in a classic land grab by the Port Authority. It sucks.

In that "classic land grab," parkland had to be laienated. Where was the replacement park built?

I know that when USTA got its stadium in Flushing Meadows in 1991, the tradeoff was a new park at Powell's Cove.

Not sure where the new parkland was after alienation...it may have been undesignated land around Brookville Park. I'll dig around and see what I can find out.