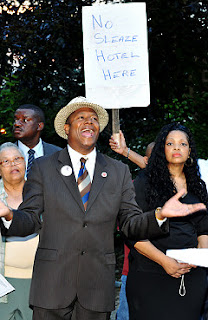 A controversial plan to open what many feared would be a “hot sheet motel," a charge-by-the-hour facility probably to be used for prostitution, along North Conduit Avenue across the street from Springfield Gardens High School, has been killed. City Councilman James Sanders Jr. (D-Laurelton) announced today that the property has been sold to new developers who intend to build a small strip mall at the site.

The community was so concerned about the project that residents filed a lawsuit to block the property owner, Sailesh Ghandi, from moving ahead, stating that the establishment would not only attract an unsavory element to the neighborhood, but that Ghandi had failed to meet the city's deadline to finish the foundation of the building in accordance with a zoning variance he was granted.

Some believed Ghandi would try to demonstrate that he had a common-law right to build, meaning that he had made a significant financial investment in the construction of the motel and therefore should be allowed to continue the work. But now those fears have been allayed with the sale of the property and residents can finally breath a sigh of relief.

Photo from the Daily News.
Posted by Queens Crapper at 12:33 AM

Now, where will I find some good local hos
to cheer me up during the X-mas holiday season?

Maybe Santa's got some booty in his bag for me.

Come to Flushing.
Shenckler's whore ads in the Q Trib
will tell you where to get lucky.

Good for Councilman James Sanders, actually one of the few Jamaica politicians that has integrity and cares about the community and the people who live there. Kudos to him.