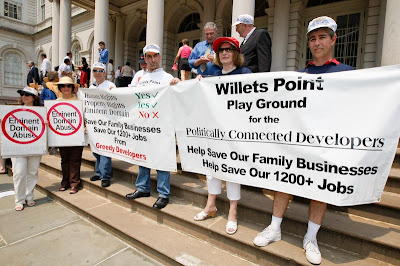 The group, united under the banner New Yorkers Against Eminent Domain Abuse, gathered to mark the two-year anniversary of the US Supreme Court's much reviled decision, Kelo v. City of New London. Since that decision was rendered, 38 states have enacted eminent domain reform legislation, but New York, widely regarded as one of the nation's leading abusers of eminent domain, has yet to lift a finger to defend the rights of homeowners, business owners, and tenants. 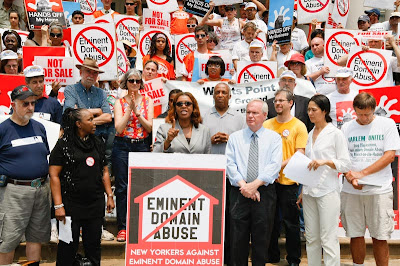 "We haven't seen this level of eminent domain abuse in New York City since the days of Robert Moses," explained Lumi Michelle Rolley, contributor to NoLandGrab.org. "Mayor Bloomberg's policy has been to threaten the use of eminent domain to force property owners to sell and to thwart every effort towards legislative reform both in Washington and Albany."

"The abuse of eminent domain is an abuse of our fundamental constitutional rights and must be opposed like all other attempts to violate constitutional rights. Our government has no business forcing us to sell our properties to benefit their developer friends," said Daniel Goldstein, a Brooklyn homeowner fighting to protect his home from abusive government seizure. "Everywhere developers want to build, government officials are paving the way with phony blight studies to accommodate them. We are sick and tired of the Bloomberg Administration's policy of eminent domain abuse, and it has got to stop. 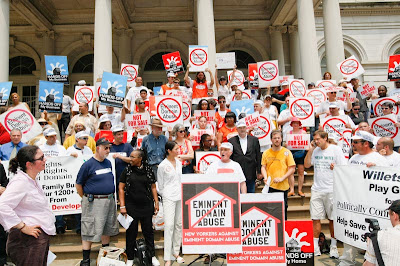 1) According to a comprehensive study performed by the Institute for Justice, New York State remains one of the leading abusers of eminent domain in the nation.

2) Eminent domain abuse in New York has increased dramatically in the past three years.

3) In the two years since the US Supreme Court Kelo decision, 38 states have passed eminent domain reform legislation, while New York State's politicians have refused to act. 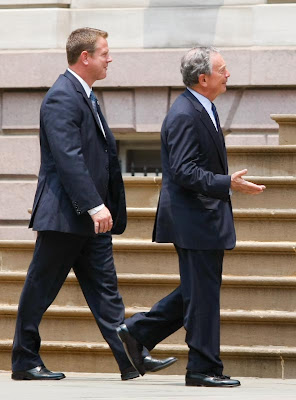 4) If the City and State can seize people's homes and businesses for private development, then no one in New York is safe from eminent domain abuse.

6) Wherever developers see an attractive piece of real estate, the City or State accommodates them by issuing trumped-up declarations that the neighborhood is "blighted."

7) Our homes, our stores, our apartments and businesses are not for sale to politically connected developers.

8) Mayor Bloomberg's policy has been to recklessly misuse eminent domain and thwart legislative attempts to curb its abuse.

9) Any neighborhood undergoing rezoning is ripe for eminent domain abuse.

"BLIGHTED" is a long used term.....even before eminent domain abuse became the major issue that it is today !

In Flushing, for example, politicians, directors of local development corporations, members of CB#7, etc. created the falsehood of a "BLIGHTED" neighborhood and looked the other way while criminal developers like the notorious Tommy Huang (who contributed generously to local political campaigns) destroyed a once thriving town by shoddy over development !

The "BLIGHT" that was to be corrected , in this case, involved the deliberate removal of the poorer classes of Flushing......mainly PEOPLE OF COLOR and replacing them with greedy real estate speculators......many of whom happen to be Asian!

Now this is the stuff!! Why can't the community preservation movement start in this direction?

Rather fewer people are subject to eminent domain abuse, but everyone has the potential to be a community preservationist.

So what is their problem in organizing?

I can't believe that in this day and age, in the UNITED STATES OF AMERICA, government can come in and take a person's land.

Even if the government (local or national) doesn't employ the use of eminent domain to seize your property it has other options for displacing you from your land:

#1. They can deliberately under-serve your area until it becomes impossible to live or work there.

#2. A municipality can tax you off your property by constantly raising your real estate tax assessment. (We refer to this as"the Sheriff of Nottingham Maneuver") !

By different groups from around the city marching together we are in the first stages of a city-wide anti-development movement.

For Queens this is particularly important for it gets us out of the suffocating bind of not only our politicians and media (that seem to be stuck in a world decades old) but our inept 'official' preservation leadership, both borough and city-wide.

I love that Willets Point will finally change and turn into an area in which people can live and work. As a life long Mets fan, I'm glad that the area will finally be something to be enjoyed.

People already do work there.

The complainers on this issue continue to amaze. Thank goodness the majority of the community and the mayor's office actually want to improve the blighted area at Willet's Point and better this key location by developing a world-class destination. The people on this blog seem to advocate for smelly, crappy junkyards rather than beautiful, vibrant businesses, retail, entertainment, dining, etc. If you listen to the people on this blog, this city would never have gotten Lincoln Center, the NY Public Library, Flushing Meadows Park, or any other development where an existing building or business had to be replaced or relocated. Genius.

Actually, the cases you cite are examples of eminent domain used appropriately - for public use. AY & WP are both cases of eminent domain being used to benefit private developers. And it looks as though the majority of the Willets Point community turned out at the rally, so you got your facts wrong.

The site of Flushing Meadows-Corona Park was a smelly ash heap before the World's Fair, GENIUS.

The majority of the Willets Point community turned out at the rally? Okay, you really need to start being genuine here. Do you believe that the large majority of the residents that live near Shea Stadium are in favor of keeping the junkyards and mess that are at WP? That's ridiculous. And there are plenty of examples of the city opening up development of areas for private development that have led to the betterment of the public. E.g, LIC was re-zoned last year and private corporations are now developing the area into a desirable, quality residential, business and dining location.
Obviously, if the WP blight is replaced, by the private sector, with a beautiful new development then the public benefits. The complainers here should look beyond their own narrow view of the world and realize that most people want to improve this area for the better. Genius.

Willets Point is situated on a peninsula. It is isolated and cut off from residential areas by a creek and highways. The only members of the Willets Point community are business owners and workers (and I think one actual resident). They are the ones who should have the greatest say in the decision of whether or not they leave. Just because downtown Flushing is running out of room doesn't mean that Willets Point has to make way for them.

"LIC was re-zoned last year and private corporations are now developing the area into a desirable, quality residential, business and dining location."

LIC was always a desirable location. I guess it just wasn't being desired by the "right" people in the city's view, and that's why they aren't promoting industry here anymore.

14 comments here, thats the number of people who care about saving these rat-hole junk-yards that have destroyed an important part of Queens.

14 comments on a blog is what you use to gauge public opinion? Dumbass.

This sudden push to develop the Willets Point area overnight is to accomodate the desires of the well connected....., for example, "the little duke of."....Wellington Chen, Muss etc. !

Nobody in Taiwan or China is going to speculate in those overpriced condos just across the Flushing River.... if the people they will, in turn, be renting those condos to..... have to look at a junkyard !

It's the process that I personally despise of..... seizing private property for the gain of private developers !
The junkyards are an eyesore and always have been !

"EMINENT DOMAIN-ATION" is what is really happening here !!!

All you "pro-dopes" are missing this very important point ....or you'd like us all not to be reminded of this !

"Thank goodness the majority of the community and the mayor's office actually want to improve the blighted area at Willet's Point and better this key location by developing a world-class destination."

WOW!!! The Parkside Group seems to be working overtime on this issue.

To all of the honest people here: Watch for the key words and catch phrases like "....the majority of the community.." That's the PR from Parkside....If it gets printed in the paper enough times, people will start to believe it.

for the genius who refused to give his name because by the way he writes you could tell he works for the city .well i am a buisness owner in willets point for 35 years. in those 35 years i paid 935,000 $$$ in tax's for which i like all the other business's got 00000000000000$$$$ in return the biggest neglect ever seen in this country .no sewers , no sanitation services nothing'''' .now we all know the city has wanted this property for 40 years for other projects that never came to fruit . this was all planned by the city ,to contiuely neglect the people so one day the area would be a total eyesore'' so its not about cleaning up the area (me along with alot of people would like it cleaned up ) its how it got like that ands who"s to blame'' i think the people of willets point deserve a medal for the abuse and neglect the have endured and yet still survived thanks jerry

The city has dipped into its well of public relations euphemistic "new- speak terms" to promote over development or land theft!

#1. "reserved for foreign real estate speculation"
#2. "driving out the area's natives"
#3. "deliberately manufactured by under-serving an
an area"
#4. "an overpopulated and sardine can environment"

Don't give up the fight! We all know who's to blame for creating the blight in this area, it's CLAIRE! Over the years, she refused the funding for the basic infrastructure.

"Crooked Claire" is only continuing the "service" she's always performed so well for her former crooked boss Donald Manes !

He couldn't finish the job in his lifetime....so his surrogate "builders' courtesan" is completing it.... for a rather handsome salary !