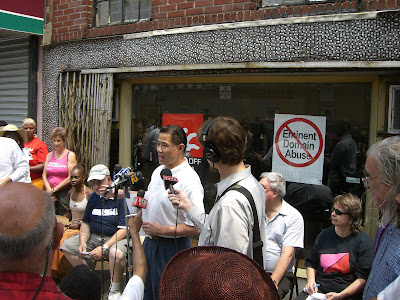 Analysis by who walk in brooklyn:

"Liu is grandstanding; while the preservation of the Duffield Street buildings would be welcome regardless of the motivation, he plainly spoke out IN FAVOR OF the greater downtown Brooklyn redevelopment as "important to the city as a whole." Excuse me? High rise &/or luxury condos w/tax subsidies? Atlantic Yards?

By speaking up against the ridiculous Duffield Street seizures, Liu is getting cover for his complicity elsewhere AND throwing black folks a bone, because they will surely NOT be welcome in the new downtown Brooklyn (except as security guards).

What's interesting too is, besides the historical importance (which isn't ENTIRELY clear but why not err on side OF preservation once?), keeping the weirdo buildings in the area would, in the long run, make things better for all by maintaining a varied streetscape... not that the city gives a shit about that except when it happens by accident."

"It's admirable that J-Loo cares so much about the historic houses on Duffield Street. Strange, though, that half of Flushing is disappearing under his nose, replaced by Fedders buildings in concrete lots."

Where was Johnny this past year when preservation rallies were held in Queens?
Posted by Queens Crapper at 12:46 AM

My guess is that John Liu fears developers such as Tommy Huang. Either that, or he won't get contributions for his campaign by his developer friends.

Yeah......the "TOMMY (Huang) & JOHNNY (Liu)" cartoon show.......featuring a NYC Council member who is so skillful at fence straddling on both sides of any issue! (Hey....this way he gets a double chance at a photo op) !

Let's hope he doesn't mistake his right foot from his left one day and slip and injure his "manhood" on the pickets!!!!

I really love that when it comes to Queens, the politician are MIA, yet if the issue touches another boro, they are a preservationist.

Item: Katz falls all over herself assuring controlled development in Soho as she panders to them while she was running as council speaker...

while building a litter box in her own district, OR

while is an advocate for community preservation in the East Side portion of her district.

WOW you are racist. Are you saying black people won't be welcome in downtown Brooklyn because they can't afford it? What a racist generalization.

The Crapper has suck to a new low.

If you actually read the post, you will see that "who walk in brooklyn" said it.

Pinky and his staff are working overtime sending in dumb comments to this blog.

it's always funny when those presuming themselves "good liberals" leap to call others "racist" for pointing out THE OBVIOUS, & what many on the streets already know.

WWIB suggests anybody "offended" (absurd as that is) learn A LOT more about Brooklyn history and borough demographics before making such outrageous accusations.
whowalkinbrooklyn.com is not the first & hopefully won't be the last to write about this issue but you can bet your sweet rosy ass it will NOT get a lot of mainstream media attention... why? _____, please. (Neil deMause did have a very good story in the Voice a couple weeks ago but that's just scratching the surface.)

WWIB strives to cover ALL of the borough-- think about that. We also warmly invite all reading this to visit both the website and Brooklyn itself... enjoy, but keep your eyes open to all that is REALLY there, not just what others taught you to see.

the reality of Brooklyn, even in this gilded age of "luxury" condos & feckless civic corruption just might surprise you... or it might not, if you consider how the truths of your beloved Queens are barely known outside ** its ** borders.

p/s: why was this rally held... yesterday?

"Where was Johnny this past year when preservation rallies were held in Queens?"

Probably at a fund raiser! He's got lots of cash, but hasn't chosen what office he'll be running for. Brooklyn and preservation wont be the last, he'll be sucking up all over the place now.

Liu Couldn't even protect (but he certainly appeared for a photo op press conference) the magnificent landmarked Tudor Ginsburg/Karalitz mansion (on Bayside Ave......right near where he lives) from the recent illegal cutting down of priceless old growth trees on that property !!!!

He's strictly a self-serving liar and an inept fraud !!!!

You never know.....maybe Brian Mc Laughlin will name Liu as another crook when he plea bargains with the Feds in order to cut down his jail time !!!

john liu is an ass kisser and bullshit artist .he's throwing the people in willets point under the bus by not coming out and saying he will vote against the use of eminent domain,but he cares so much about brooklyn yea ok'' watch out for his right hand bitch too ,ellen young they are partners

Who was their leader....Congressman Ackerman ? !!!

I'm sure that Donald Manes "played ball" with the Asian colonists on this one !

Oh my! "Colonists". Politicians can be crucified for suggesting colonization.

Quite a lot of Asians are generally known to be prejudiced against African Americans (just ask many who've entered Korean etc. shops in Flushing and were followed around and profiled as though they might be potential thieves or criminals) !

I guess that the "Black vote" must be important to John Liu.....for whatever future office he's thinking of running for!
He's already raised a whopping million dollar campaign war chest !!!