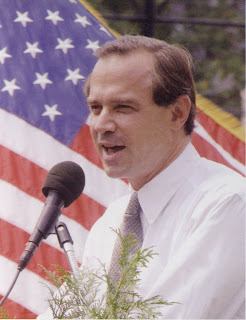 In a telephone interview, the city’s parks commissioner, Adrian Benepe, said that no realistic reuse plans, with enough money attached, have emerged. The city is studying the possibilities for restoring and reusing the site, he said — but he added pointedly that the pavilion was originally intended to be a temporary structure. The city recently spent $70 million on a new pool and skating rink in Flushing Meadows-Corona Park, he said, and his department is also seeking money to restore the park’s lakes.

Among Venerable Ruins, a Rusty Relic From 1964

“The question, given all the other demands for Flushing Meadows Park, is, is this the best use of that money?” Mr. Benepe said. "I honestly don’t know the answer."

How about stepping aside then and allowing someone who does know the answer take over...
Posted by Queens Crapper at 12:04 AM

This is the man who gave the "OK" to dogs off the leash in our public parks !

Let's find out where he lives and unleash our dogs (Alligators and various other pets) for a stroll in front of his home !

Benepe has not stepped into the library of his own Parks Department HQ, which has 30 years of proposals on file.

In the June 22nd blog entry, there are plenty of ideas for reusing the landmark, but Benepe is ignoring all of them.

This dope is on dope !

The problem with Benepe, Cooper and Marshall is that they just lack the proper business sense. There is no excuse for this pavilion to deteriorate; and all the studies they have perfomed on it indicate the it is ready to collapse. Those poor QTIP patrons that are risking their lives when seeing a show!

Benepe can only claim the title of Commissioner of Doggy Doo .....a man who advocates a dogs off the leash policy in our public parks where our children are free to sit on dog poop or get K-9 attacked on the see-saw !