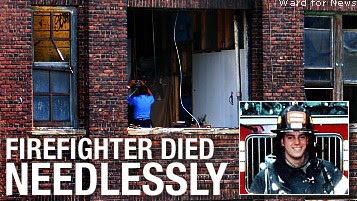 Another death due to an illegal conversion:

The former sewing factory at 83 Meserole Street in East Williamsburg, Brooklyn, is like hundreds of other buildings in the industrial precincts of Brooklyn — a hulking, century-old brick box lined with big windows, its insides turned into lofts inhabited by designers, musicians and other practitioners of the hipster professions. That the apartment conversions are illegal is usually of little consequence to anyone, including the authorities.

Illegal Lofts Get New Scrutiny After a Firefighter’s Death

Daniel Pujdak fell 60 feet from the roof of an East Williamsburg building while responding to a blaze in a fourth-floor loft that should not have been inhabited because it did not have two exits, according to the Department of Buildings.

Hero died trying to save an illegal apartment

Three people lived in the apartment illegally, including artist Karen Van Wart who sparked the small fire by carelessly placing a burning cigarette on a wooden window sill, officials said.

DRIVEN TO GO UP THE LADDER

One inspector said the building had dozens of new and outstanding violations, including uncovered electrical boxes and at least one defective fire escape, but nothing related to the fire. Although building owner Nachman Brach had filed paperwork with the city in 2000 to convert the building, its certificate of occupancy still listed it as a factory.

So the DOB knew for years that the place was converted illegally, but did absolutely nothing about it.

More blood on the hands of our mayor, city council and department of buildings. Now they're not just killing illegal immigrants...

Photo from NY Daily News
Posted by Queens Crapper at 7:07 AM

I can name dozens of other sites that DOB is "looking the other way" on! Some may be owned by "prominent" landlords (i.e.like Tommy Huang ??) who give "generously" to politicos (maybe even Dennis Gallagher, Melinda Katz, & John Liu etc.)!

Unfortunately, there are likely to be more deaths among New York's bravest before anything serious is done to revamp the STILL CORRUPT New York City Dept. of Buildings !

What the hell are you waiting for Mayor Mike? Are you too busy considering a last minute run for the U.S. Presidency ? !!!

It's easy to say this man died because of the illegal apartment, but even if that space was used legally as a storage space, and there was a fire, he would've been doing the exact same thing.

Someone living in the place started the fire. If no one had been living there, there would not have been a fire, and no death.

"designers, musicians and other practitioners of the hipster professions" [emphasis mine]

Wouldn't creative be a less biased term? And yes, artists have been living in illegal lofts for ages because most of the legal ones are priced for people in much more highly paid professions after the artists have been kicked out.

Not that that excuses this building not being up to basic fire codes.

""It looks like it was just - plain and simple - an accident," Bloomberg said on his radio show yesterday"

It wasn't any accident Moronberg. It was your arrogant failure to manage. Why has this mayor done nothing to rein the rogue city agencies?

Bloomberg, you were not elected to govern the people of New York. You were elected to manage ("govern" if it makes you feel more important) the other municipal employees.

Bloomberg's arrogance and impudent stupidity is the direct cause of this brave and spit-upon (by Bloomberg) young man.

Do the job in front of you or resign!

You know, a ready ally of the preservation movement might be the firemen's union.

As a century of housing regulation gets swept away and ignored, the danger to them will increase.

The building frenzy puts them unnecessarily in harms way.

And unlike the inept white-glove preservation movement, these guys know how to play up to the camera, refuse to take BS in the press, and let the politicians know what's on their mind.

Looks like the family's forgiving all who may have been responsible for this tragedy:

"It was just a tragic accident." "Nobody is to blame." "It's a firefighter's job to go in, whether the building was legal or illegal. The outcome is still the same."

The Crapper is not as forgiving. How many more have to die before you do something about it, NYC?

"rob".... your opinions seem to lean in the direction of favoring landlords & developers !

What don't you understand about the word ILLEGAL as it applies to this particular owner allowing ILLEGAL residents to occupy his building ? !!!!

That fire-fighter's love and regard for human life came first.....even before his own....while all the $$$$$$$ collected from those illegally converted apartments seem to have been the only thing that landlord cared about !!!!

Just look through the Craigslist apt ads. Check out the "lofts" that are so called residential. Especially in W-burg and Bushwick but even in Red Hook. All owned by Hasidic or orthodox jewish landlords and they seem to be able to break all building codes with impunity. They even have affiliated real estate "brokers" through whom you must rent apartments and pay exorbitant rents. They make you go through the most rigorous of credit and background checks and most won't rent unless you have a wealthy (i.e. your family) guarantor to cosign the lease.

They rent to the desperate and clueless "hipsters" most from out of town or the burbs with well heeled families. These hipsters have an insatiable desire to live in a gritty loft and to work at a job which fulfills no actual needs.

I'm Jewish just to let you know, there is no bias here. But it seems that the Hasidic and Orthodox jewish landlord community have something going on at buildings to allow them to get away with this.

You guys know that I am very critical about illegal conversions and the crap that is being built in our neighborhoods but this really was just an accident.

The illegal conversion had nothing to do with anything and the firefighter could have slipped off of the ladder climbing to extinguish a fire in a legal building.

To look back after an accident and say that it could have been prevented if people weren't living there is as absurd as myself saying that I wouldn't have tripped on the curb if it hadn't been there.

Having said that I still do believe that the building owner deserves any fines that he should receive and I believe that if the DOB knew about such violations and didn't pursue them then someone should be held accountable for that as well.

Someone called 'anonymous' said to rob: "What don't you understand about the word ILLEGAL as it applies to this particular owner allowing ILLEGAL residents to occupy his building ? !!!!

Mr. or mrs. anonymous, please see russ' comment before this. He said exactly what I was thinking of typing. Thank you, russ.

"The illegal conversion had nothing to do with anything and the firefighter could have slipped off of the ladder climbing to extinguish a fire in a legal building."

The illegal conversion is the reason there was a fire in the first place. As the Crapper said, if artists weren't living in the building, that ditz wouldn't have been smoking in there, and rested her cigarette on the windowsill, igniting the blaze.

Anonymous said:
"The illegal conversion is the reason there was a fire in the first place."

No, a careless smoker was the reason that there was a fire.

Anonymous said:
"As the Crapper said, if artists weren't living in the building, that ditz wouldn't have been smoking in there, and rested her cigarette on the windowsill, igniting the blaze."

You know, IF the buiding weren't there in the first place it couldn't have caught on fire either. Again, the physical building and the conversion had nothing to do with this firefighters death.
Not to take away from this tragedy but IF you want to blame something for this loss then blame what actually caused it. Blame the 110 pounds of equipment that shifted and caused the man to lose his balance. You can even blame the firefighter himself because he had a safety harness on that wasn't connected. IF he had been connected with the safety harness then it could have been prevented.
You can not cut corners when it comes to safety.

Shame on all of you.

A firefighter has died and you use his death to bolster your own flippant, half-assed political points.

What's wrong with all of you?

This was front page of the Daily News. And the owner of the building was cited multiple times after the accident for the illegal conversion. And as for the fire, I agree, there wouldn't have been one in the first place if some asshole artist hadn't been living there illegally. Someone should also check the tax records of the landlord and see if he claimed all of that income.

There's one thing that I notice witha lot of recent fires. Many of them were illegal conversions with conditions that either contributed to or exacerbated the fires. So much for them being "harmless."

A careless smoker who left a cigarette burning caused the fire, fire department officials said. The accident has drawn criticism from community members who say buildings in the neighborhood are poorly regulated as landlords rush to convert old industrial spaces into housing and other uses.

"The bottom line of the situation is, people should not have been living in that building," said Philomena Salvato, who lived on the same street as the Pujdak family for more than 20 years. "It speaks to the bigger problem that's going on in this neighborhood.

"People are coming from all over and they're putting up buildings and they don't have the proper permits," Salvato said.

The city issued three citations for illegal loft conversions to the building's owner the day after Pujdak's death.

If no one had been living in the building, it is just as likely that it could have "accidentally" burned down like the Greenpoint building that just HAPPENED to be in a convenient place for developers.

It's just a very sad story.