We are neither cattle nor sheep 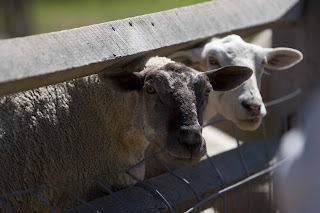 You need a nytimes.com account to read this, but it's very funny and worth the extra step:

The meat institute allots six square feet for each hog in a truck on its way to baconville. Aboard a boat, federal export law requires that a 150-pound sheep be given five square feet. On the E train, human commuters are supposed to get three square feet, and they don’t. We have aimed low and missed.

“So you stand next to people,” Mayor Michael R. Bloomberg said this week after the subway bosses released crowding statistics that would shame a stockyard operator. “Get real. This is New York. What’s wrong with that?”

Subway Riders Treated Like Cattle? That Would Be an Upgrade

No one can accuse the mayor of pandering, much less of having a clue, but such an attitude among meat packers would cause riots or congressional hearings. The meat industry must face animal welfare activists and concerned consumers.
Posted by Queens Crapper at 8:45 AM

Mayor Mike has his cadre of plain clothes security guards who guarantee that he'll get his adequate alloted space when he rides the subway !

Or maybe that's really Mike's double posing as him while our real mayor rides his limo to work !!!

The "3 square feet" seems like a tiny amount, but that's because subway riders stand on two feet, not four.

I'm pretty sure though that quite a few of the riders that I've come across lately travel on all fours just before they step into the car.