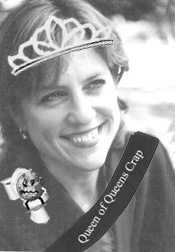 Even though there are 837 days until the city’s next election cycle, two prominent Queens City Councilmembers, David Weprin and Melinda Katz, have already declared their intention to run for City Comptroller in 2009 setting off an earlier and longer campaign season than the current presidential primary.

“That’s a product of term limits,” said Councilmember Katz, referring to her early candidacy announcement. “I have never been a proponent of term limits because you really have to think about what you want to do early on.”

Well, only if you are a career politician.

“In the end everyone wants what’s best for the city.”

Good one, Mel! Crappy is falling off his bowl laughing. Well, if you lose, you can always do standup at Caroline's.
Posted by Queens Crapper at 6:15 AM

Golly.....gee....Melinda might have to go back to singing for her supper instead of maintaining her cushy and well connected position as a career politician !

After Cincinatus was finished serving Rome in the Senate , he "returned to his plow" and tended his land !

Career politics is, perhaps, the most dangerous foe of democracy !!!

“I have never been a proponent of term limits because you really have to think about what you want to do early on.”

What a strain it must be to have to think ahead!

Well, it's a strain if the next grab bag doesn't have more corrupt potential than this bag. (Not you Melinda-san. The "bag" reference wasn't about you - oh, wait - yes, it does apply. Sorry to make you think.)

When a sponsor runs a TV or radio contest.....anyone who works or has worked in the past for that station is barred from participating in that contest.

funny how none of the comments or any of the articles speak to a councilman who announced many months ago he is running for mayor and has been sending out reqests for donations to everyone i know,

DURING HIS TERM AS COUNCILMAN

REPORT ON THAT QUEENS CRAP

You cannot just routinely pick out the people you do not like and mock them. Mock everyone, including your well known favorite councilpeople.

I can mock whomever I choose. Actually, most members of the City Council make mockeries of themselves.

you started off appearing to do good by reporting on improper development.

now it is becoming clearer that you are just a political tool of a councilman who has announced his candidacy for mayor.

you have become exactly what you claim you are fighting against.