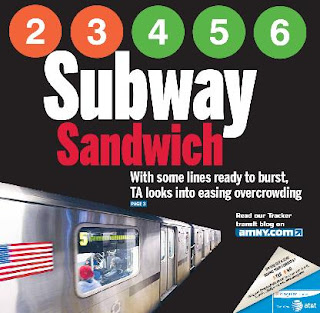 Passengers packed like sardines on several subway lines may eventually get some breathing room, but the city's most cramped commuters may have to wait years for relief.

Adding more cars to trains and extending station platforms could alleviate pressure. But that takes money the MTA doesn’t have, said Roberts, and one potential funding solution — congestion pricing — could exacerbate the problem in the short run, especially if diverted drivers choose to take trains on already overcrowded lines.
Posted by Queens Crapper at 5:08 AM

Build it fast, and build it big. Build them everywhere and they shall come.

Don't be too concerned about how they will go.

Ok, guys, now we have everyone's attention on the overcrowded transportation network. You got the media's attention because this involves commuters with pull that live in the suburbs.

More people does not help NYC residents, only hurts us.

In the Bloomberg briefs...it's time he washed those things!

George.....
Bloomberg & Co. have to pull that million people figure out of his magician's hat to justify the need for all the overbuilding that's been planned !

If we stop over development.....we stop the lucrative cash flow from developer to politician !

Then.... how else will a builder be able to buy somebody like Dennis Gallagher, Melinda Katz or John Liu etc. ? !!!!

I don't like the "subway sandwich" as it is currentlt served!

I'm switching to "Quiznos" (the LIRR) as an alternative means of transportation !