Carrying a camera could cost you 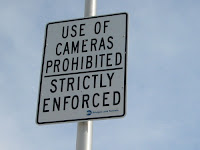 Some tourists, amateur photographers, even would-be filmmakers hoping to make it big on YouTube could soon be forced to obtain a city permit and $1 million in liability insurance before taking pictures or filming on city property, including sidewalks.

Under the rules, the two or more people would not actually have to be filming, but could simply be holding an ordinary camera and talking to each other.

Ah, vague rules. The city's coffers love them, as do officers with ticket quotas...

Welcome to the communist city of New York, 2007.
Posted by Queens Crapper at 7:42 AM

Manhattan should now be called Bloombergville. His police state is expanding each and everyday.

I can't drive or park in Manhattan without taking a 2nd mortgage out on my house; a parking ticket will cost you a week's pay; the subways are hot, dirty and third-world like; I can't piss in Manhattan without buying a meal; I have to have credentials to visit city hall or most other public buildings; now I have to pay a fee to use my camera. Next we’ll have to pay for using Bloomberg's oxygen.

How many more days before we are rid of this all-controlling egomaniac billionaire bozo?

Right on crapper, vagueness rules in Manhattan. Ever try understanding those no parking signs?

Tell your Council member to repeal this law.

I want to see somebody stop me from taking a picture. And what about all the tourist ,should we just tell them to leave their cameras home? This is America isn't it?

This is a law only Commissar Bloomberg can love.

Why is this man sneering at citizens (Little People) who worry when terrorists are caught planning an attack on JFK airport, but is willing to savage anyone (except a terrorist) who uses a camera?

Forget the weddings, graduations, births, first bike ride, or even taking a photo of your family in front of your house. These are all illegal.

Overdevelopment, rogue inspectors in the DOB, politicians who are corrupt (including the Commissar himself), rogue appointees - these are all cool to this Commissar. But an ordinary citizen, going peaceably about ordinary business? Now, there's a real crime!

Commissar, get your lazy, sneering ass back to Boston.

That'll be great news for the NYC Visitors & Convention Bureau !

Yeah....is Mayor Mike ("the dope") going to have the cops confiscate every camera phone that's being carried in NYC !

Anything to make a buck in a city that has lost most of its real business and manufacturing base and has got to collect nuisance fees to keep it in the black !

The French once instituted a "window tax".....that's right ! Citizens were charged a fee based on the total number of windows in the living space of a dwelling ! That's how the Mansard Roof came into existence (windows in this faux attic space were exempt) !

Free camera phones should be given out to all citizens so we can all become the eyes on crime.....whether the perps be terrorists , developers engaged in illegal activity, the NYC's DOB, crooked politicians, etc. !!!