DOB records indicate that Glendale homeless shelter is off the table

Just about 2 weeks after NYC DHS started dumping homeless men into the Maspeth Holiday Inn Express (Columbus Day 2016), the engineer of the proposed Glendale shelter site signed off on paperwork to convert the factory into offices instead of a hotel as originally planned. 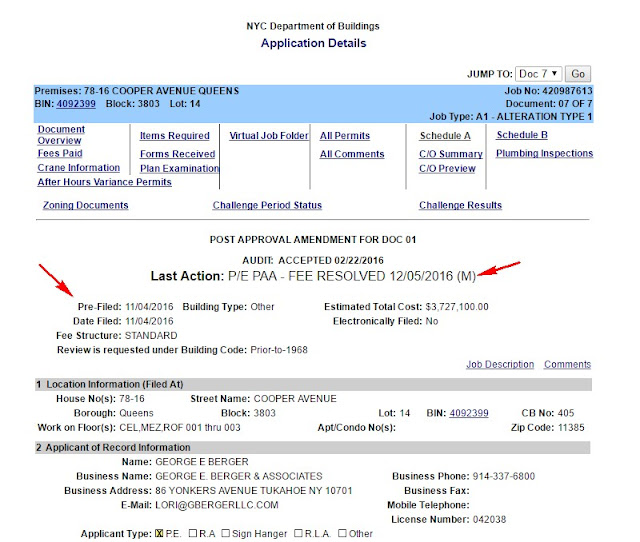 Once again, the city has won every lawsuit regarding the Glendale site and the work permits have been approved, yet there was a sudden change in plans.

The timing of this seems to further substantiate the belief that the Maspeth shelter is the result of an agreement between Council Member Elizabeth Crowley and the city. You'll recall that when she found out about the city's plan for Maspeth, she stayed completely mum about it for 3 months.
Posted by Queens Crapper at 12:58 AM

Oh well I'm sure the timing of this is just a coincidence. That's what Crowley voters are going to be telling themselves as they line up to vote for her for a 3rd term in November.

I will not vote for her. Never did.
Sure she can fix up the staircase and rename it but for years it was an eyesore and neglected.
Do I trust her? No. The factory may not become a hotel/shelter but something else in Glendale could be.
Anything can happen.
But if those who highly criticized her in the past few months about dumping her only go ahead a vote for her don't complain when a shelter comes your way.

It is interesting that each office has a full kitchen, a private bathroom with a bathtub and shower...

Each office needs a full bathroom if they are providing bike parking. Those people sweat and stink.

I see an accessory cafeteria listed, but nothing mentioned about bathrooms or kitchens in the offices. Regardless, there's no way you're legally housing people in office space.

Building permits can be approved as offices and later converted into hotels under M1 zoning.

the original shelter plans online had a lot of offices with plumbing provisions for kitchens & baths
this is just a way to get things started and get everybody off there back
everything gets fixed up and ready
suddenly plans change
can u say bait & switch?
does glendale have that much office space demand?

Make no mistake this is a Trojan to get housing in !
Perhaps it time to picket Crowley's home & office, she gotten a pass for far to long.
Of course she was in and knew about it but would rather put on knee-pads for the crazy mayor then stick up for her own neighborhood. Enough of this bullshit already !!!

And stupid voters will once again award Crowley with re-election for selling them down the river with a smile.

you know its bad when dizzy lizzy's uncle won't support her

How convenient. Surely Glendale needs more offices, yes, that must be it. The homeless need to go somewhere and the former location looked pretty prepped n' ready. How strange to see a 180. Someone somewhere got paid, someone else did the paying.

Glendale is one of thosenabes in Queens that doesn't have the juice that Douglaston, Douglas Manor has.
They will ride roughshod over them anyway.
Just a mater of time.

Hope you see this, it's not soo off the table now. Almost 2 years later and the last post is absolutely correct. 200 men shelter in the bid..check out Holden's FB page for his confirmation on what's happening here.