Another attempt to revitalize Jamaica 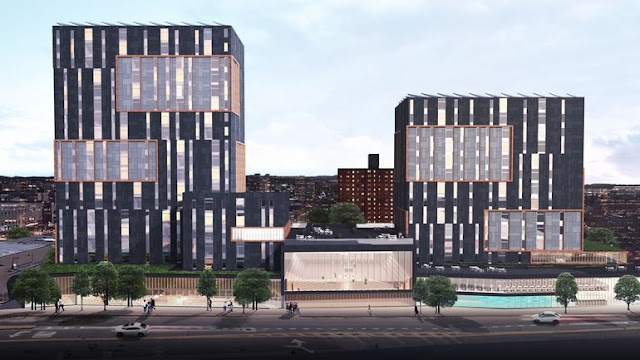 The city selected a developer to turn a former NYPD parking garage in Jamaica, Queens, into a large, mixed-use complex with more than 350 affordable apartments, officials announced Thursday.

The building, which will be developed by Omni New York, is a key component of the de Blasio administration's 2015 economic development initiative called the Jamaica NOW Action Plan, which aims to spur job growth and retail development in the neighborhood.

"[This] proposal builds on southeast Queens' strengths as a commercial and transit hub," said Maria Torres-Springer, president of the city's Economic Development Corp.

A request for proposals for the site was issued in February 2015, with Manhattan-based Omni submitting the winning bid. All of the units in the new building, located on 168th Street between Jamaica and 93rd avenues, will be enrolled in the city's affordable-housing program, and a portion of the parking in the building will be dedicated for NYPD use.

The project, which will also include ground-floor retail, is the first milestone of a larger effort to foster job growth in Jamaica, which is served by four subway lines, a major Long Island Rail Road junction and the Airtrain to John F. Kennedy International Airport. Yet, despite those existing transit advantages and a 2007 rezoning that allowed for the construction of ample commercial office space and hotels, job growth and economic activity have declined during the past decade, according to the city.
Posted by Queens Crapper at 6:50 AM

Looks nice according to the rendering (but don't they all), but then that awful Royal Waste Transfer station is a few blocks away where all the damn trucks go right by this. Do they plan on doing something about that. And how many more damn people do we need in an already overcrowded place. Let’s see if this happens, just like so much other shit that did not happen in Jamaica. Considering that Katz and the usual suspect clowns like Comrie, Meeks and the other fools are involved, I don’t have high hopes for that taking off or being anything like they say it will. And what kind of retail will be on the ground floor: a beauty and supply store, a 99 cent store, a chicken shack, a medical office, a drug clinic, and other bullshit. Oh and what percentage will become a homeless shelter.

I mean we have heard about so many developments that never came to fruition in Jamaica. Hell, Meeks was involved years ago in that million dollar plus “Shops at Sutphin” and to this day, still has no retail. If Meeks is involved, something shady will happen.

AND Katz is holding her BULLSHIT State of the Borough today right in beautiful downtown Jamaica at York College. Wonder if they cleaned up a path for her to arrive.

I am sure people are familiar with the Ratner and China's Oligarchs plan to install a Blade Runner city in downtown Brooklyn. Because this is the same plan. Just superficial bullshit with suspect characters.

And like every presentation of every convention dealing with projects like this, the graphic designs of the buildings are ugly, sterile and out of scale.

Of course vibrancy and diversity is going to be bandied about, despite the presence of those qualities that have always existed in these towns these moneyed groups and concerns want to ravish. They can't help themselves. The funny thing is the well has run fucking dry and they are tapped out on these bogus pitches.

I can still remember what Jamaica Avenue was like when mom took me along in the 1950's to go shopping there (I'm 68 now). She enjoyed both the department stores and the little mom and pops stores that lined the side streets.

Now I wouldn't walk those streets even if I was surrounded by the National Guard (God Bless Them!)....

No amount of "development" can save Jamaica. The criminal element is too deeply embedded. I feel the pain of the hardworking people who live there and are victimized by the thugs who often live in the same building or on the same block.

And where do all the cops from the precinct park? Oh, yeah, on the sidewalks near the precinct, in the small municipal lot (taking spaces away from shoppers), and on local side streets ignoring alternate side regulations.

Addabbo for COngress: He'll bring home the bacon like his dad

GET RID OF THE HOMELESS AND OTHER VAGRATNTS FIRST THEN WORK ON REVITALIZING THE AREA.

Another case of throwing good money after bad.

Never happen!
It started going to the dogs in the late 1950s, and it's been downhill ever since!
Bye, bye to a once nice spot!

Sorry to say that even some members of our military have no respect for those who live and work in that area: there is a military recruiting center on the southwest corner of Jamaica Avenue and 165th Street, and those who work there regularly park their cars (with federal "G" license plates) in the bus lane on Jamaica Ave, blocking and/or disrupting the already way too narrow flow of traffic, even though they could just as easily park on 165th between Jamaica and Liberty, or on 164th across from First Presbyterian. They obviously feel "privileged" and "entitled" to have those official vehicles (most seem to be Hyundais), and show a complete lack of respect for both other drivers and the neighborhood.

Gotta start somewhere, folks. Doing something is better than doing nothing at all.

Call in Trump and let him send troops to his old home Jamaica instead of Chicago.

Do you live there, do you know what you are even talking about. That area is NOT mostly black, while some blacks (African-America, Jamaica), it is a complete mixture of Bangladeshi, South Asian, Hispanic, Latin, West Indians, Asians, very small splattering of white (mostly old timers), but actually blacks make up the smallest percentage in that area. WRONG too on Good shopping/services, unless your standards are low, majority of shopping is cheap, crappy retail that caters to the more lower-class folks from the area and elsewhere. The only thing you got right is there are plenty of parking lots (but let's see how that goes if they go into hyper over development)and that area is not bad as far as crime, which there is not much crime in that particular area.

AND for all the naysayers, yes, you did need to start somewhere, you just cannot do nothing and yes, many of the people living in Jamaica are an issue, but again, you need to start somewhere and that somewhere before building is to 1) clean up the area of garbage/litter and have ENFORCEMENT on all quality of life issues, 2) move that awful poisonous waste transfer station, Royal Waste, which is only a couple blocks from that site which has 24/7 huge waste trucks coming and going from all over the entire NYC. 3) STOP dumping homeless shelters/drug clinics all throughout the area. Do this first and then do building, but reasonable not over-developed building to provide good housing to people who live here (where they have to follow rules in such places, like no hanging out in front of buildings making noise/blasting music, etc) and then to attract middle class people from elsewhere who cannot afford many places in Queens and Brooklyn. THAT is how you do, but unfortunately not how the assholes in charge do.

AND one more thing, better elected officials, but then that goes everywhere including the White House where we have a demigod running amuck and has no idea of what he is doing and or how things work. Having Democrats not playing hard ball and good smart Republicans not standing up to Trump is making it worse. BUT, I digress on the subject at hand, but it all is relevant.

Problem is 90% of the foreigners REFUSE to assimilate. They simply wanna live HERE like they did back home in the 3rd and 4th world. Can you believe these people are kill and bleed live goats in the street and backyard then stink up the up the whole neighborhood for miles (and days) with the currie cooking.
Its horrible, Jamaica needs to be condemned, send all the slobs packing, plow and start all over.
That would be the only fix because it will take GENERATIONS to domesticate these people and that's no guarantee. Take your Romani Gypsy's for example

And now he's fucked. And impeached for sure.

Props for his attempt to terminate TPP though, but he made the immigration order too broad and arbitrary and his order to revive the keystone xl is just as wasteful as the fucking wall.

NO, all he has done is signed quickly (WITHOUT ANY THOUGHT OF CONSEQUENCES)several executive orders not even thinking of the ramifications and whole picture, just like what many of you here complain about withe the crooked do nothing Queens elected officials. Put something into action without thought of consequences. Mr Donald "Impetuous" Trump.

The person who stated this and the sheeple who agree with this live in their own bubble and the world does not work in a bubble. Nor have they even thought of the ramifications of these actions, have you, of course you have not, some of you are not even aware of that.

Cede Jamaica to the natives and stop wasting money.
All the king's horses and all the king's men can never bring back the good old days of Jamaica again!

want the area to be vibrant and revitalized?
Then you need to attract ppl or buyers with money.
No money, no honey, which means the place will die.

where to get money. So far it's only foreigners who has money to dump around.
So attract foreigners.