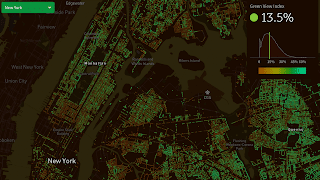 From 6sqft via Metro:

Researchers chose GVI over satellite imagery so as to “represent human perception of the environment from the street level,” according to the Treepedia site. GVI is measured on a scale of 0 to 100. A city with a GVI of 100 would be completely covered by tree canopy.

New York ranked the third lowest of the ten cities, with only Paris and London having less tree coverage. With a GVI of 25.9 percent, Vancouver was found to have the most tree coverage.
Posted by Queens Crapper at 7:02 AM

And the Asians , Italians, Greeks...so on and so forth....who are defoliating northeast Queens as they build their Mc Mansions.

What happened to the million trees?

There's only a handful of forestry staff working in Queens. And it shows.

Planting trees would mean that someone (the owner of the property on which the tree is planted, or the city?-ha!) will have to take care of the tree pits. Every tree pit in my neighborhood is covered in a filthy mulch of cig butts, used condoms, cigar wrappers, chewed gum, empty Georgi bottles, and dog crap (or human crap for all I know).

Hey, I gotta rake all those leaves? They uproot the sidewalk, which I got to fix? The break my pipes, which I got to pay fines for? They fall on my house and break my roof? Maybe they need ot grow some trees into the dead matter they call bureaucrat brains.

It should be illegal to remove long established trees unless you get a special (expensive) permit. That should put a damper on these idiot money grubbing foreigners who have no appreciation for the land and whose aim is simply to obliterate any trace of nature as they build their incredibly tasteless ugly big boxes to show off their ill-gotten bucks. We need the trees a lot more than we need more ghetto Chinese, who hang their laundry out to dry on bushes, sell illegal endangered animals for their quack remedies, run "massage parlors" and generally degrade whatever neighborhood they invade. And invade is the right word. Now you find great numbers of them in Fresh Meadows, Forest Hills, Kew Gardens Hills and other places where you never used to find them, chopping down trees, leaving trash on lawns, leaving cigarette butts all over the place, living 6-8 people stacked into a 1 bedroom apartment in an illegal boarding house, etc.

>What happened to the million trees?

A decade ago we'd be firmly in last place.

Sure who needs trees or plants or grass. Sure, humans can live without them, they are just for decoration.

Yes, we need more trees, but we also need more enforcement of littering laws around these things. I have 2 tree pits near my house (my house is on a corner), and I am tired of picking up people's refuse every single day. Whether it's from people walking their dogs and letting them dump in the tree pit, or people parking their cars and then emptying all their car trash in the pit. I can't go and deface those cars or throw the dog crap at the people, but I have to clean up after them. Don't get me started on the bottles of piss that people leave in the pit also. I don't blame people for not wanting to invite that crap to their area, even though trees are a good thing.

An old large tree can save a person a 1 million BTUs of AC during the summer.
Whats around 4 Kilowatt hours a day during summer
People are stupid

A lovely large healthy bradford pear in the sidewalk strip on my block was cut down a few years ago. I contacted 311, believing that the homeowner at that address must have done it (Queens homeowners hate trees for some reason--leaves?) and I finally got the response that the Parks Dept. had cut it down-- no further explanation. A few months later a spindly little decorative tree was planted there-- also by the Parks Dept. A tag on the tree bragged about it. WHY????? To add to the "Million Trees" tally?

The new arrivals do not care about old trees or any trees, except maybe to dry fish on or hang laundry.
Anything over six feet tall is considered dangerous by my Italian neighbor, who hails from the tree bare south Italy.

Bradford Pears easily grow wild, and are considered nuisance trees, and are disproportionately likely to blow over in a storm. They bear no edible fruit and are covered in spikes. Their only saving grace is their lovely spring blooms.