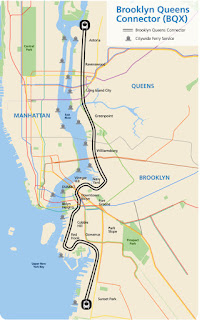 The city claims the big-money developers who lavished cash on Mayor de Blasio’s campaign and nonprofit are not involved in the planning of the multibillion-dollar Brooklyn Queens Connector (BQX) trolley line.

Yet an insider says a developer and a high-powered advocacy group created and led by another developer are not only in on twice-a-month interagency phone calls on the project but they are driving the discussion.

Ya-Ting Liu, the executive director of Friends of the Brooklyn Queens Connector, participates, as does a rep from Two Trees Management, the company that came up with the streetcar idea and which will benefit from a new transit link to its swanky waterfront projects.

“They, in effect, run the call,” said a city source familiar with the project, which would connect Sunset Park, Brooklyn, and Astoria, Queens.

In fact, city schedules refer to the conference call by the name of the nonprofit advocacy group — the “FoBQX meeting.”

But it is a government call with staffers from the Department of Transportation and Economic Development Corp. It sometimes includes Adam Giambrone, the city’s streetcar czar.

The participants discuss the progress of the $2.5 billion project that de Blasio began trumpeting in February. But the outsiders are guiding the city’s strategy for community outreach and identifying those who can be tapped for support, the source said.

Why must we need a trolley?
Bike lanes not enough?
How about good old walking?
Due to the bike lanes and increased congestion on Grand Avenue and limited parking it's just best to walk.
Anyway what will be the cost of the trolley? Same as a bus fare??
Do we really need it??

Well, 2 trees have already paid their CONY dues, so this is going to go down by any means necessary. It will look like all the efforts by Berlinrosen would go to waste. The hubris displayed is incredible, this trolley goes through the heart of all their decadent posh Brooklyn properties. These greedy bastards are certainly looking to franchise the entirity of that shitty tram, the trollies will probably have their logo on it if it gets done.

This friendly cabal is nothing but a collusion of REBNY fellows and lobbyist groups and I guess that those people in the latter work or once worked for Johnny Rosen. Whose firm has parlayed this in locations in two other cities, this was, I assume, a small group of friends in warehouse when it started and in 3 years they are a powerhouse firm, and look at them now since they awarded Billy D B mayoralty (maroyalty sounds right)

This has been standard procedure for a long time, certainly since the city for sale type governing in the mid 80's. It didn't stop those that capitalized on the officials transitions in that era. It sure didn't stop all that rapid fire rubber stamping for rezoning and upzoning that's led to city and borough-wide out of scale hyper-development since 9/11/2001. Even when Preet gets the subpoenas and warrants out, these towers are going to keep proliferating, despite any gloomy economic forecasts in the near future. For the damage from their little neo-liberal conspiracy is already done.

Why doesn't the MTA establish a bus route to see if this route is needed and to check how many people will actually use it.

They all make the money the old fashioned way - by corruption.

Alas, developers control EVERYTHING in New York so completely, that it's now an entrenched criminal enterprise that even the power of organized crime family rings worldwide could never rival, much less surpass.

But, the evil that these criminal-hustling thieves continue to FOIST on to a forever duped, bilked, scammed and damned society malingers LONG after their earthly demise, for whom everyone else continues to pay a soul-crushing price for their endless loop of corruption, graft and greed that prevails——EVEN POSTHUMOUSLY!

Also, major factor in deblasio continuing the subsidies Bloomberg offered his fellow trump buddies at FreshDirect to get them out of that waterfront site, and move them to the MarioCuomo/Galesi dumping ground in the South Bronx waterfront. And then grab more of the closing grocery stores real estate all over the city.

Even when Preet gets the subpoenas and warrants out, these towers are going to keep proliferating, despite any gloomy economic forecasts in the near future. For the damage from their little neo-liberal conspiracy is already done.
--
Man proposes - God disposes. Every ecnomic cycle is just that - a game. If done right, fine, if done stupid, you are left holding the bag.

The purpose is NOT convenience, but misery.

This would take more traffic lanes away and create greater traffic confusion.

This is all part of the true purpose of "Vision ZERO" and that is total misery for motorists so that they sell their vehicles and pedal their bicycles! This is retribution for not be given the congestion pricing, motorist fleecing program...

Of course. They built their "luxury" high rise crap in the middle of a transportation desert.
No wonder these tall tales of luxury remain poorly occupied.
In order to rescue their bad investments, they need a trolley.
Are we all off our trolleys to pay for their follies with our tax dollars?
Wake up voters. Vote out ALL incumbents who,are in the pocket of real estate developers. In the northeast, it's councilman Paul Vallone.

They call it VISION ZERO because they don't have any.
Fitting name if you ask me.

Paulie's supporters are shaking in their boots, change is coming.

JerrybRotondi said...
"Wake up voters. Vote out ALL incumbents who,are in the pocket of real estate developers. In the northeast, it's councilman Paul Vallone."

With the exception of Assembly Member Margaret M. Markey the rest of the useless incumbent lifelong so called representatives were all reelected with "Yuge" safe margins! Many ran unopposed.

It is quite difficult to fix such excessive stupidity...

It's long overdue that ALL political and public corruption be classified as a capital offense. Because, right now in NYC, the quality of life is far worse than many Third World countries, many of which ironically have better healthcare and transportation for their citizenry, a testament to how completely ravaged and disgraceful ALL politicians (not public servants), in New York State government have become (or always have been)!

In fact, political crime, corruption and graft are simply a corporate ordered-and-driven way to continue with the grinding disparity of business and development of great reward and private splendor for the few, versus public squalor, beggary, obscurity and quiet desperations for everyone else.

New York is a padded cell of political corruption that is a thousand times worse than the century old days of Boss Tweed and Tammany Hall!

We all hope that change is coming.
We have a council member, in Paul Vallone, who cares only about his developer clients.
Call his district office and get put on hold with some lame excuse.
He actially wiil not attend any civic association meetings, I'm told, that are not Paulie friendly.
What a wimp!
Now, if I were a real estate developer, I's be on Vallone-y baloney's speed dial list.
Dump this self serving kookootz!
But it ain't over 'til it's over. Shaking in his boots is a start. Voting out this bum is another matter.
That takes a voting block!

Even the "excessively stupid" might eventually get tired of getting porked by shady politicians.
Maybe someday, if there is anything left of Queens, the IQ of its voters might improve.
Nothing is a slam dunk until it actually happens.

>And who is going to defeat Paul Vallone?

How about a protest ?

That route is perfect for a ferry, instead