Well that took a while 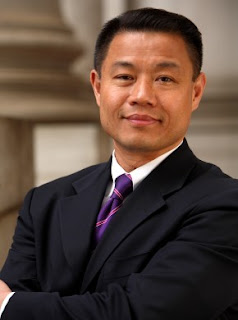 Former mayoral candidate John Liu, who began his political career as a city councilman representing northeast Queens, was fined more than $15,000 for violations related to his successful 2009 run for New York City comptroller by the city’s Campaign Finance Board.

What do you expect from a Tommy Huang relative, honesty?
Just be thankful that Liu never became mayor.
BTW, John Choe , his former city council COS , is still around.
Head of "One Flushing" (whatever the hell,they do) ,
North Korean Communist sympathizer, spouting claims of American imperialism , in past press articles.
What's his game?

He hates America but we the taxpayers paid for his radical liberal education at Columbia U.

I thought that he owned some $600K in penalties, no?

can he use campaign funds to pay the fine?

And in other news - General Francisco Franco is still dead.

What about the penalties for Liu's illegal campaign signs? That's where the big $$$ was.

It says he was fined. It doesn't say he paid a fine.

And, let us not forget that 'OTHER' thug politician (not public servant), the ever hustling Ron Kim.

So, I contacted this public payroll 'slug-in-training' a few years ago when he worked at the Executive Chamber in Manhattan, as part of Andrew Cuomo's 'Friends & Family' payroll. I reported openly practiced corruption, graft and flagrant abuses of power to Kim, and how did he handle it? By slamming the phone in my ear—REPEATEDLY! When I complained to his equally arrogant and derelict supervisors, they jerked me around like I have never seen before, until they just stopped taking my calls altogether.

But, how this Korean-hustling schlepper is now a publicly elected fraud (with his own crooked staff in Flushing) is the greatest mystery of all. How sad then, that a petty thief and sociopath like this gets to retain a level of power and privilege (both of which haven't been earned, much less deserved) that devalues all honesty itself!

John Liu still owes hundreds of thousands in fines for his illegal campaign signs. All the others who were fined such as Thompson paid. Liu claimed racism.

As others have stated he was assessed a fine, it doesn't say he will ever pay it. He's the son of a Bank thief so don't expect him to do right.

Sadly I do believe that he's allowed to pay fines from campaign contributions.
What a system we have.

He belongs in jail.

I mean what the hell was former council member and crook John Liu doing showing up at a Jamaica 103rd community council meeting this month stating “I’m not running for anything”. So what the fuck was he doing there. Don’t tell me we are going to get some diversity in our crooked all black elected official clown circus. Supposedly he had been invited by council leaders to speak and he basically took questions from the audience about Trump being elected President like that has any fucking thing to do with all the problems in Jamaica for decades. And you mean our own wonderful council member I. Daneek Miller could not do that or did he have some very important street naming ceremony photo op going on.

I just find this kind of ironic that this clown showed up at the Jamaica 103rd precinct community council meeting to talk about Trump this month, while he was just fined more than $15,000 for violations related to his successful 2009 run for New York City comptroller by the city’s Campaign Finance Board.

What a clown, but hey he fits right in with the rest of the Jamaica elected official clowns. Crooked and a do nothing bullshitter.

This is what happens when you use Working Family Party and ACORN staff.

I wouldn't trust this brazen, openly practicing thief EVEN if his tongue was notarized!

John Liu, just go away already and finally get a REAL job (ANYTHING--ANYWHERE)!

John Liu is Tommy Huang's cousin.
He is shopping for any job he can get.
He will give a hand job to anyone who can give him one.
Sotrry, Johhny. Keep your hands off of my joint!

John Liu got off easy while his crooked associates were thrown under the bus to save his ass.
He will be around looking for a political patronage job somewhere.
Maybe Alice Liu Huang, Tommy Huang's wife , will put cousin Johnny on a construction crew.
Oooh! All of those Butch construction dudes cruising for Johhny's little ass.
He shoud have been Bubba's bitch in jail!

Yes, John Choe and Norditol, a Korean Commie group.
Liu tossed him out of his job at the comptroller's office after Choe's embarrassing connections to North Korea.