City admits that overdevelopment to blame for sewer problems 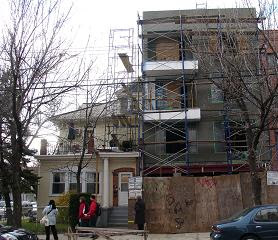 The city Department of Environmental Protection sends repair teams to that block — and other spots with scores of complaints — but the flooding persists, residents say.

****All told, four of the five spots with the most 311 complaints are in Queens, where city officials say commercial and residential development outpaced the buildout of critical support infrastructure, including catch basins and storm sewers.****

Seeking to fix the longstanding watery mess, the de Blasio administration has set aside $1.7 billion over the next 10 years to build out the city’s storm sewer system.

Soooooh....curb the over development!
No? Why? Because development enriches our city council members through kickbacks?
Tsk, tsk, tsk!
Kickbacks to our public servants?
What else would you call developers giving campaign contributions to those city council members who later support their overdevelopment projects?
A prime example...Councilman Jimmy Van Bramer..
First he gets $10,500 from the Wolkoff family which goes into his re-election coffers. Then he votes to approve a monstrous project on the former 5 Pointz site, right next to the #7 line.
Van Bramer, a supposed champion of labor unions, doesn't seem to mind that a huge amount of non union labor is being used there.
Then again, what is Councilman Jimmy but a developer's bend over backwards boy?
Moving further east, you have Councilman Paul Vallone, a full time developers' lobbyist, moonlighting as my part time "representative".
Can we win against these odds? Yes we can, but that takes real involvement, not just sitting back and complaining.
Your government belongs to you. If you do not participate, some political opportunist is ready and waiting to claim it for their own.
Lazy is as lazy does....screwed by government officials!

One Billion Seven Hundred Thousand DOLLARS will only get the City Three catch basins and two lengths of pipe.

But any of the projects will only expose greater shortcomings in the sewer system.

And these projects will far exceed the budgeted funds.

On another note, at least they will use union labor...

Oops....damned computer glitch.
I proudly sign my name to the previous and am glad to claim the title given me by someone..."a dedicated character".
Thank you, sir!

Are any of the crooked DOB inspectors being prosecuted and thrown in jail ? Or thrown out of our country?

Pardon me, but isn't SE Queens the least over developed in NYC?

Paved over lawns are a big contributor to this problem.

It's interesting that the solution is only sewer construction, but no action on the actual cause.

Anonymous said..Pardon me, but isn't SE Queens the least over developed in NYC?

Hardly, there are parts that are very overdeveloped where many single family homes have been torn down to put up shitty 10-20 family apartments where there are several illegal conversions, slumlords who don't give a shit how many people are crammed in and grass and trees completely wiped out. Plus all the one family homes that have been turned into two family homes putting added stress on the infrastructure. Just because one does not see glass towers like in LIC, does not mean it is NOT overdeveloped.

There is absolutely no reason why this constant sewer flooding should still be going on for as long as it has. Do you think this would be the case in Forest Hills or Park Slope, of course not, but it is in the dirty SE Queens, where everyone from the powers that be to some of the residents don’t give a shit. The city is of course the major culprit for not updating pipes and the overcrowding in an already overcrowded place. BUT it does not help flooding issues when asshole residents dump grease in their drains or toilets and when owners of places pave over every single bit of grass, which by the way in SE Queens, grass and trees are on the endangered species list.

The first step is admitting you have a problem. So at least the City is making progress

Hey the tax money is good for the city from all the overdevelopment.

This may be why sudden developer interest has waned. Although De Faustio has recently allocated a billion for infrastructure improvements and modernization.

I used to ride around these areas a lot and always wondered why there were floods on certain blocks every time I traversed there. It's not that the area was overdeveloped but whether it should have been developed for housing at all. This was just shitty city planning or maybe a case of classic quid-pro-quo from developers to electeds back then for favorable rezoning.

These pipes should have been replaced decades ago, despite conditions being exacerbated by stupid habits.

Jamaica - Throw the cards in the air and see where they land unplanned community.

There is home where the owner paved over the backyard and the DOB inspector wrote that there was no action necessary because he/she came to inspect it on a day when snow covered the yard. Totally Paved yard...no summons.

There is a Jamaica home where the owner paved over the entire backyard and the DOB inspector wrote that there was no action necessary because he/she came to inspect it on a day when snow covered the yard.

you mean all that cement that was poured over every inch of grass and dirt doesn't absorb rain water?

South east Queens might be the least developed because the White racists cannot pry the Black population loose.
They have tried on numerous occasions.