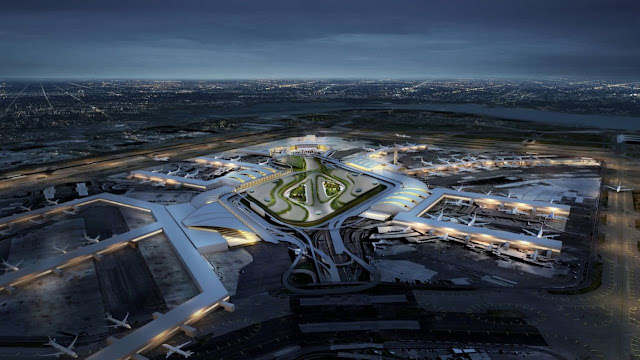 The three-pronged plan, completely reimagines the airport while also attempting to address access on roads and through mass transit.

The overhaul would come at the tune of about $10 billion, with around $7 billion coming from private investment.

It was put forth by Cuomo’s Airport Master Plan Advisory Panel, which is also overseeing the redevelopment of LaGuardia Airport, as a way to accommodate projected passenger increases.

The proposal would expand the newer terminals to meet growing passenger demands. Older terminals would be redeveloped and relocated to increase connectivity. The roads in the airport facility itself would be reworked create a less-complex circular route.

By car, Cuomo’s administration wants to widen connector ramps of the Van Wyck Expressway and Grand Central Parkway at the Kew Gardens Interchange to reduce bottlenecking. It would also add an additional lane in each direction to the Van Wyck. This would cost anywhere between $1.5 billion to $2 billion.

Cuomo said his administration was still deciding between two options to address mass transit access to the airport. One would focus solely on improving JFK AirTrain service and its links to the rest of the area’s transit network. This option would increase service frequency while also doubling the number of cars per train, from two to four. It would also bring a complete overhaul to the Jamaica transit hub to improve transferring to the AirTrain from the subway and LIRR.
Posted by Queens Crapper at 12:18 AM

When was the last time a government project was completed on or under budget.

Everything is listed in "Billions".

The Governor's friends will benefit nicely...

LGA and now JFK, there is more concern with tourism than with tax paying residents, what about the BQE, the Van Wyck and the cross island highway roads? What about funding to house the homeless and the working poor in the city?

This, the populist pandering offering free tuition (which Andy certainly knows won't happen) and the recent pardon of that brinks robber adds to infinitely stupid array of dick moves by this asshole governor.

I'm so confused. Hasn't JFK recently had an overhaul? It's currently a pleasure, as far as driving around JFK has ever been, to pick up and drop off at JFK. Yes, you have your usual idiocy curbside, but nothing can be built to improve how fools choose to stop at the curb.

I picked up someone from JFK in September. I waited in the cell phone lot - yes, there is one! - and she called me after she picked up her bag. It took me 3 minutes to get to the terminal, and off we went.

HOW DOES HE PLAN TO FUND ALL OF HIS 'VOTE FOR ME FOR PRESIDENT ' PROJECTS? HEY PREET...WE THOUGHT YOU WERE GOING TO THROW CUOMO IN JAIL. WHAT HAPPENED?

Billions of dollars going to be spend, yet no direct subway line to either airports!!! .. Fuckin great!!!

THAT'S RIGHT. In Fact it was overhauled I believe around the late 90's early 00's.

Don't be confused at all. Mario's son is tripping balls since he fast tracked that half 2nd ave subway line, which I believe was supposed to be done in it's entirity at it's scheduled completion but was split into phases.

This "overhaul" is just a scheme to get developer and hotelier interest in the area. I think Andy wants the conduit to resemble Miami Beach.

And what the hell is the "complete overall" of the Jamaica LIRR/Air Train station. Wasn't that just overhauled not that long ago. The only damn thing is needs are much bigger and more elevators as opposed to the crappy three they already have, where one is always out of service.

AND yes, getting around JFK is actually pleasant. Great so we can have too fucked up airports that are nightmares to maneuver around. AND what the fuck is with this BILLIONS. Everything is billions now, even a dopey streetcar that benefits a select few.

FUCK, fix the goddamn roads, which resemble a third world country, update the fucking subway so it runs on time and stop making it a homeless shelter. Fix some of the fucked subway stations, especially in areas like Jamaica. Finally do something responsible for the homeless. Overall all of the city agencies, especially DOB, DOT and DOS. Put more police in higher crime areas. There are shitload of items on the FIX list and JFK is not one of them.

What is in desperate need of an overhaul is NOT JFK, but Albany itself——and, starting with the profligate, wanton waste king himself, Mario's son (a tired retread of sociopathic diversions that betray public trust)!

Until We the People start punching back TWICE AS HARD, then nothing will ever change. And, as far as Preet is concerned, the powers that be got to him and he chose life over nabbing the scourge at the top!

I am deeply ashamed to be a New York State resident, when there is such an entrenched, never ending loop of Albany (and City Hall) corruption, graft, greed, dishonesty, dishonor, disloyalty——and, a total dereliction of public duty that continues to suck our tax dollars into a vortex of rage and despair, and the only ones who continue to pay a soul-crushing price are the taxpayers themselves.

As always, Mario's son and City Hall's Wilhelm are voracious 'CRIMES WITHOUT CRIMINALS' in action, for whom everyone else pays the perpetual tab of all grinding corruption itself, as the 'Delay, Deny——And, Hope That You Die' credo is in full and open operations for 2017!

> The roads in the airport facility itself would be reworked create a less-complex circular route.

The roads are already pretty simple and well marked - what's the problem?

>By car, Cuomo’s administration wants to widen connector ramps of the Van Wyck Expressway and Grand Central Parkway at the Kew Gardens Interchange to reduce bottlenecking.

That would be nice, yes.

>It would also add an additional lane in each direction to the Van Wyck.

Also nice, but less necessary, especially at that cost.

How about making it a free transfer from the bus or subway instead?

>The other option for public transit riders would be to explore the feasibility of a one-seat ride to JFK though this option was not elaborated on further.

For some reason this bit was cut out of the quoted article. It would be nice if they had something resembling specifics.

This jackass wants to make free college for everybody also, including "art and liberal arts schools" where students can get degrees in fingerpaint and become lifetimes of welfare. (this as the hippy Marxist professors and administrators teaching this garbage and propaganda get paid $200K a year with benefits &vacation time up the wazoo)
Where is this 1/2 trillion dollars (or so) going to come from ?
Has he been taking the same drugs as the crazy NYC mayor ?

Why are all these democrats so prone to serious mental disease, seriously ?

Master plan or masturbation.
We we all get screwed that's for sure!
Uh...more planes...more noise! Where the fuck is "Quiet Skies" ....singing "Gumbaya"?
The international air travel lobby rules the roost.
There will never be peace and quiet in Queens.
You quiet apathetic voters should have been making noise about this about thirty years ago.
Now it's far too late. Where is Congressmember,ber Grace Meng...daughter of a former convicted assemblyman, Jimmy Meng?
Going through the motions but caring only for herself.
Will she be warming a seat in Congress like her predecessor Gary Ackerman for about 30+ years?
Vote tha shady huckster out!

This guy reminds me of Rockefeller with his "edifice complex". He now wants his legacy to be ridiculously expensive re-do's of the airports. He also wants people to think he personally built the second ave. subway with his own two hands.

Preet will have a field day with this!

Revive the LIRR Rockaway Branch and extend the N to LGA. That would be sufficient.

How is this fool going to add two lanes to the Van Wyck? It's already in a trench in the spots where it's always most congested, with no room to expand.

The Rockaway branch has been poached by the Queensway confederacy of dunces. This is being done on the down-low with mario's sons' backing.

Wait for it. They will announce this in April. Cue Vivaldi's four seasons spring piece when it happens.

Somebody needs to overhaul Albany!
When the corruption investigation committee that Cuomo set up got too close to his friends (the guv next in line, no doubt) he suspended the committee.
We have a crooked governor, a crooked mayor, and REBNY owned city council.
Can we be raped worse?
Everybody in government is up our asses!

Now, that is well said, last Anonymous! When Mario's son can wield SO much power that he can unilaterally decommission the Moreland Commission at the EXACT time that the commission itself was preparing to investigate HIM, then it's official that corruption, graft and greed is now OPENLY PRACTICED without consequence——except of course for the grave, never ending consequences for EVERY languishing constituent of Mario's reductive son--all of whom continue to pay the soul-crushing price of this empowered idiot's madness until they are all six feet under!

What a filthy disgrace then, that New York State government has devolved to——compliments of the perpetual, party machine-failed gravy trains that continue to falsely provide (elitist, not egalitarian) power, privilege, unjust enrichment and PRIVATE SPLENDOR to the LEAST qualified and MOST sycophantic——versus PUBLIC SQUALOR, adversity, beggary, obscurity and quiet desperation for everyone else!

And, the pubic be damned (again and still)!

Rockaway branch wont happen in our lifetime, it will take a good 3 miles (years)of lawsuits followed by a technical logistics mess.
Nobody wants that shit in the backyard which nature has taken back with trees, brush, birds, owls, bats that will all be destroyed to put in light rail or even a bike path.
It will also destroy people nice yards, privacy and bring gentrification and vast changes to the last nice parts of Queens that have been saved due to limited transportation to the city.

Rails bring big buildings, vagrants, criminals and renters.
I wish these progressives would drop dead and stop ramming this shit down our throats and calling it a meal. This is Queens (only 100 square miles including 32 SQ miles of airports, marshland and wildlife sanctuary making it actually 68 SQ miles atop glacial dirt as in NOT FRIGGAN TOKYO !!

I think the sick Marxist bastard mayor and his "special friends" are pushing Rockaway rail to destroy the last neighborhoods of salt of the earth hard working people that democrats cant win.

If Queens Quiet Skies had $64,000, they still wouldn't come clo9se to the billions that is backing the Global Gateway Alliance. And they are very active, still well liked, have had more success than any other advocacy group of its kind and aren't going away anytime soon.

As for Global Gateway - this project is is all thiers. They have a publicity machine and have gotten the governors ear. Here is a question you may want to ask. Where is Melinda Katz? She is on the governors airport committee as well as 7 other other real estate lobbyists linked to Global Gateway.