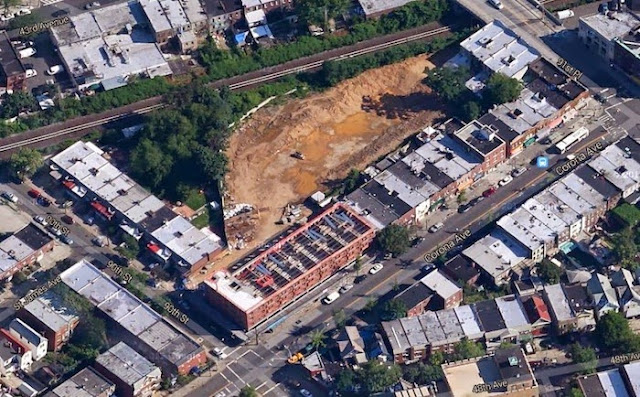 CHURCH REQUESTS HELP FROM LOCAL POLITICIANS
After several postponements, Wednesday, April 2nd Saint Mark African Methodist Episcopal Church and the current owners will meet with the New York City Departments of Landmark Preservation, Buildings and Health to decide the fate of the bodies of former parishioner, including the 15 bodies exhumed a few months ago, in the old cemetery that was formerly a part of the church. Developers of the land planned an above and underground parking structure beside the recently completed structure of condominiums and retail spaces located at what was 90-15 Corona Avenue (Block 1586, Lot 10).

Construction was halted for a brief time on the completed structure and postponed on the parking in 2012 when the mummified remains of a former female parishioner buried in an iron coffin (the Iron Coffin Lady), who was so well preserved that the construction crew mistook her for a recent murder victim and called the authorities. Last December, 15 additional bodies whose grave marking were previously destroyed, were disinterred on the property.

“St. Mark is of course concerned about the fate of the bodies of our past members. We want to find a way to preserve the final resting place of those left of the approximately 300 souls who were buried in the church’s former cemetery,” said St. Mark’s Pastor Kimberly L. Detherage, Esq. The church has contacted its local councilpersons, assemblymen, district leader, state senator, Congressman, Senators and the Mayor in hopes of realizing the three goals it has identified:
• To leave the recently uncovered graves where they are and not to move or cremate the remains
• To have this African American burial site declared a protected landmark
• To hold the current owners/construction company responsible for the storage, memorial and re-burial costs of the Iron Coffin Lady as well as a memorial for the recently uncovered bodies as was initially agreed.

“After reviewing the agenda, we are afraid that now that this meeting is happening, its results will be a foregone conclusion – a rubber stamp on the destruction of for this African American burial ground,” said Rev. Detherage. “We are really hoping that some of our representatives will stand up for the recognition and peaceful rest of these former citizens.”


CONDOS/STORE FRONTS BUILT OVER CHURCH CEMETERY
On December 24, 2013 upon information and belief, 15 graves were unearthed during recent construction on the plot of land that is now 90-05 to 90-19 Corona Avenue but was formerly 90-15 Union Avenue, the address of the Union Avenue African Methodist Episcopal Church and its cemetery, the previous name of the Saint Mark AME Church of 96-18 Northern Boulevard. These graves are directly behind a row of new condominiums and store fronts that were erected despite St. Mark’s concerns and inquiries about this property since the October 2011 disinterment of the mummified remains of an African American woman in an iron casket who was found on this same property during the construction of the condominiums.

Location: The property in question is approximately 1.4 acres previously listed as 90-15 Corona Ave, (Block 1586, Lot 10) in Queens, New York. It is on Corona Avenue between 90th and 91st Streets in front of the right-of-way for the Port Washington branch of the Long Island Railroad and across the street from Newtown High School. The condos are entered at 47-19 and 47-21 91st Street, next door to a residence at 47-07 91st Street, and the block of store fronts extends from 90-05 to 90-19 Corona Avenue and are next door to the Sabor Colombia 2 restaurant at 90-31 Corona Avenue.

Property Owners: Several names have been connected with the ownership, development and construction of this property. While we understand that it is a consortium and suspect that they are all connected, here are the names we know upon information and belief:

Time Line:
• 1828: the United African Society purchased the property in question from local landowner William Hunter and his wife Jane for $75.00 and erected a carpenter shop where they worshipped until they could build a church edifice.
• 1888: the cemetery reportedly contained 310 graves.
• 1902: when a church trustee, Mr. Purcell Harris inquired into the denomination using the property; after a thorough investigation, the property was returned to the church, which applied to the African Methodist Episcopal Church and in 1906 and we renamed ourselves the Union Avenue AME Church.
• 1906: and we renamed ourselves the Union Avenue AME Church.
• 1928: the City of New York, in its effort to widen Union Avenue (now named Corona Ave.) disinterred and transferred 20 bodies from the church cemetery to Mount Olivet Cemetery in Maspeth, Queens.—Thomas Johnson, Samuel Dualing, Jacob Lip, Jesus Huff, Nicholas Coles, Henry Stephens, Emma Stevens, Emma Lawrence, Elsie Harris, John Johnson, James Peterson, James Peterson, Jr., Sarah Hodges, Rachel Warren, Carolina Johnson, David Watson, Thomas Peterson, George Harris, Sarah Stephens and Katie Johnson (Graves Number 2 and 3 in Section C, Lot 3498; Burial Permit numbers 308-327).
• 1929: the church moves to 95th Street and 32nd Avenue and is renamed Saint Mark AME Church.
• 2005: (revised 2006) A Phase 1a Archeological Investigation study was conducted and a document prepared BY: Jo-Ann McLean Inc. Archaeological Consultants at the request of Peter G. Geis, Cozen O'Connor, attorneys representing Denali Construction and property owners AMF Machines Corp. Corona Properties
• 2011: the mummified remains of a 19th century African American woman, the Iron Coffin Lady, buried in an iron casket are unearthed during the construction of the current condos and store fronts.
• December 24, 2013: 15 graves were unearthed during recent construction on the plot of land that is now 90-05 to 90-19 Corona Avenue but was formerly 90-15 Union Avenue. Wing Fung Realty is the management company whose sign declares they are conducting the sale and Dahill Construction is listed as the current property owners on the NY Department of Transportation notices for sidewalk and bus shelter (Q 19) openings in the lobby and storefront windows

St. Mark’s Goals:
While we feel it is our ecclesiastical duty to return to peaceful rest the remains of our former congregants, we recognize that records show the disinterment of only 21 bodies from our predecessor, the Union Avenue AME Church’s Cemetery, including an African American woman who was so carefully and expensively for the time period, laid to rest in consecrated ground that historical reports claim held at least 310 bodies in 1888. Therefore, we feel that the remaining land, which is separated from the recent construction by a concrete parking lot, be set aside as a memorial:
- that the recently uncovered graves be closed and allowed to remain where they are,
- that the remaining land be designated landmark status and
- that the property owner/construction company pay the cost of re-interment, storage and memorial, as previously agreed, for the Iron Coffin Lady as well as a memorial for the 15 recently uncovered graves.
Posted by Queens Crapper at 12:40 AM

So let me get this straight, the developer comes from a country that worships and respects ancestors. But not if they're someone else's ancestors?

Just like how Linda's Cai Trading Company nearly got away with developing Brinckerhoff Cemetery in Fresh Meadows, Wing Fung Realty is doing at this African Methodist cemetery.

Brinckerhoff was saved from development and this cemetery can be saved too!

Missing from the story is how the ownership of the cemetery changed from the church to some other entity - or the core problem here the land survey or city map which did not correctly locate the cemetery?

This is serious and I hope Queens and it's elected officials think so too. Where is Councilman Dromm on this issue?! Or Councilwomen Julissa Ferreras? This is in their backyard! They should help and support these people and this cemetery. A lot has been ignored in Queens and development has always been favored. Let us start going in the right direction and start fixing and preserving what little history we have left in Queens.

These Asians who pay no respect to the dead, will face all the consequences. Two condos buildings in the middle of the block with no street frontage? In case if there is a fire, how the firefighters can access the buildings?

The basic premise of this is so disturbing. We find that we are building on a historic cemetery and digging up bodies, and there is still a question about what should be done?

As long as it does not interfere with development you can ask them to do anything. They got time to burn with so little to do.

Why did the church originally sell their property? If they are concerned about the graves, etc, then they should have kept it. I think they should be required to buy back their property if they want to create a memorial, etc.