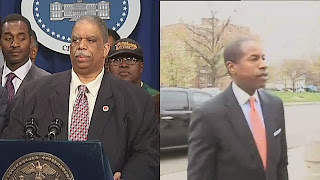 Comrie had represented the 27th Council District in Southeast Queens from 2002 until last year.

He'll face off against Smith as the state senator awaits trial on federal corruption charges.

This was originally reported by the Queens Tribune.
Posted by Queens Crapper at 12:46 AM

vote for the lesser of two evil assholes

or better just write in a candidate,

So who woud replace him as Deputy Boo President, should he win? Sounds like Comrie is very unhappy where he is now. For good reason. He was forced out of the BP election so Katz could win. What crap!

This is misleading, Comrie is not the only one going against Smith. A number of other candidates have already thrown their hats into the race, including Democratic operative Munir Avery, Navy veteran Bernadette Semple and attorney and small businessman Clyde Vanel.

Now to my comment: In the OH SHIT department, Queens Borough Deputy President Leroy Comrie may challenge Senator Malcolm Smith for his seat. Like Comrie did such amazing things for Jamaica in his three terms as councilman, that you would want him for Senator. The community looked like a garbage dump when he came in and looked worse when he left.

But of course dim bulb Jamaica residents will more than likely jump on his bandwagon, just keep mediocre politicians in office forever. It is the typical crap over and over in the political game of musical chairs, just keep shifting shit all over the place. It seems like Comrie’s goal is not the betterment of a community, but the betterment of Comrie.

The incompetent vs. the corrupt. Great.

Indeed, it's funny how news reporters covering Comrie's announcement failed to name the other candidates running.

The return of the Big Man.

Schools in this district have gone from excellent to worst in the city (August Martin HS). I would like to hear Mr. Smith and Mr. Comrie's rationale for the growing number of failing schools, school closings, and charter schools opening in SE Queens. If the schools were performing well, which they once did, why are charter schools necessary? Who benefits? Also, where do they stand on the issue of changing admission requirements for the eight specialized high schools from the single SHSAT to multiple measures. I am skeptical about students being admitted based upon GPAs from failing schools. Will they be prepared for the rigors of these schools and be able to GRADUATE?