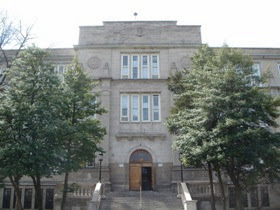 The Department of Education is calling it a misunderstanding regarding next fall’s enrollment at Bayside High School.

Edward Tan and Jaya Sarkar, officers with the Bayside High School PTA, recently sent an email to the Chronicle saying the school is bracing for more than 1,000 new students in the fall, “to clear space for new schools co-locating at the downsizing Flushing and Martin Van Buren high schools.”

But the DOE says that number is based on the incoming freshman class, estimated at 900 students, which is actually down from the current freshman class of 1,005 students.

Bayside is being used at 150 per cent of its capacity.

The DOE can spin that there won't be any new over-the-counter students entering their sophomore, junior, and senior years, can't they? We know better!

This is just a continuation of Bloombutt's destruction of large high schools. "Take the few remaining successful high schools. Stuff them with way too many students which overtax the school's resources. Sit back and watch the school go downhill to the point where it fails. Then close it and re-open it as 4 new mini-schools with 4 sets of costly administrators and see the same exact results as before. Four failing schools instead of one."

Sorry to say the DOE is lying to the newspapers and ignoring the parents. Does this sound like an administration more concerned about parent involvement?
Same old crap.

Received this via e-mail:

Your posting of an article by Liz Rhoades from the Queens Chronicle is all wrong and we emailed Liz to tell her:

"Dear Ms. Rhoades,
I am sorry that you were not able to reach our PTA Executive Board for comment and am more disappointed to see that the DOE has provided you with misinformation which was repeated in your article linked below.
Here are the facts:
1. Bayside High School has a student capacity of 2,100 per the DOE's own public documents
2. Bayside High School currently has 3,100 students per the DOE's own public documents- 1,000 over capacity/about 148% utilization)
3. 2,400 to 2,600 of its current students will be returning in September (2,500 is median)
4. The DOE has already offered over 1100 new students seats and expects 1,000 to accept just from ROUND 1
5. Returning students plus new expected students will bring the school to at least 3,500 students (about 167% utilization)
6. This number does not include the students that the DOE will allow into the school through ROUND 2, transfers, appeals, and No Child Left Behind.
7. All put together, unless the DOE honors its commitments, the school is back to 3600-3800 in September!!
8. More than 80% of the DOE's high schools in Queens operate at or below 100% capacity!!
We still have not gotten ANY response from the Chancellor or DOE which claims now to value parental and community involvement.
I think a correction or follow-up article should be considered.