Someone has to own this theater, but who? 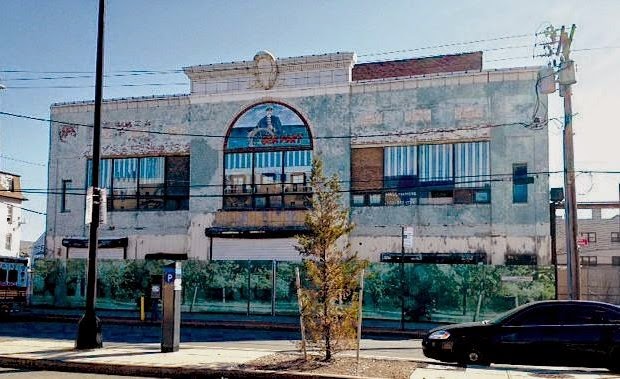 There’s a theater, some mystery, and a little family intrigue. The setting is Beach 116th street.

People have been asking for a long time, who owns the theater? The huge, dilapidated, long-vacant building casts a literal and figurative shadow over Rockaway’s main commercial strip.

With many new storefronts and a handful of new businesses, Beach 116th Street looks better than it has in decades. A new merchants association is bringing positive energy. And now there is the potential for many millions of Sandy relief money to further transform the block and surrounding area.

But a true transformation cannot occur without the overhaul of the theater, the string of vacant stores near the beach, and the Park Inn Adult Home on the boardwalk.

That’s where the Konig family comes in.

Esther Konig says she wants Beach 116th Street to be beautiful. And she is going after Game Changer money to make it happen.

The Game Changer is a competition to spur economic growth. Using CDBG-Sandy relief money, the Economic Development Corporation (EDC) will award up to $18 million to a single winner or spread that amount among a number of entrants.

Esther Konig and partners in Sea Wave Realty own the Park Inn building on the boardwalk between Beach 116th Street and Beach 115th Street. The New Park Inn Adult Home is a tenant and is known to share its mentally ill residents and panhandlers with the Beach 116th Street shopping strip. The adult home business, according to Esther, is owned by her father-in-law, Sam Konig.

The Park Inn is currently undergoing a facelift of sorts. As reported in The Wave in November, the Park Inn was in line to receive $1.4 million from the New York State Sandy Social Services Block Grant. Esther says work is being done though no money has been received. The owners are doing the work hoping to be reimbursed, she says.

Esther also owns the buildings around the corner, the row of steel gated vacancies, that begin on the oceanfront and then continue down 116th Street. She also owns the beachfront building of what used to be the Sand Bar.

Abutting all her property, all 44,000 square feet, is a crumbling theater. She doesn’t own the theater. And she says she doesn’t know who owns it. But she did say she “heard through the grapevine” that there might be plans for a medical facility on the theater site.

That’s, maybe, where Michael Konig, her husband, comes in. He’s not sure if he owns it. At least that’s what he said in a phone interview. He said he has “influence over it” but would have to check if he owns it because “these things are in corporations.” Although he was unsure of ownership, he said the building is for sale. He’d take $6 million. If he owns it.

He would also join in the Game Changer “if it were prudent.”

Although Esther Konig claimed repeatedly that she doesn’t know who owns the theater she did arrange tours of the place and according to a local even accompanied interested parties on a walk-through in the fall. As for hearing things through the grapevine, it seems the grapevine is indeed fruitful.
Posted by Queens Crapper at 12:40 AM

Every time I see something like this I think of that white elephant, the Queens Theater sitting in the middle of Flushing Park - and all those millions the borough sinking into a place that has programming that you would find in a, say, Eugene Oregon or a Troy, NY.

And its a place you have to drive to.

I can see someone of a certain age married to a Queens developer and wears her hair in a style circa 1968 going there to make the scene with the wives of other Queens developers.

But for the rest of us in the real world, when we see a real theater building like this, or like RKO Keiths, or have the charms of a real theater in NYC that is just a subway or train ride away, you have to start to ask yourself some questions.

How much money are we sinking into Queens Theater, and compare that with an alternate universe where there are plans to restore neighborhood theaters like this.

Which plan would be more effective for quality programming, attendance, and use of public monies?

although the residents there may object,with good reason considering the prospect of more cancerous gentrification,that theater would be great to hold concerts there.Since that is the only street that has seen revitalization and its convenient for commuters.

the fact that its still abandoned is quite a shock,considering all the hipster pandering crap thats been developed a mere 20 blocks east with that bullshit playland hotel and artisan tripe restaurants that have opened up there

and that playland inn,something about the facade of that place is disturbing.It looks like its made of the planks of the boardwalk that was destroyed after sandy