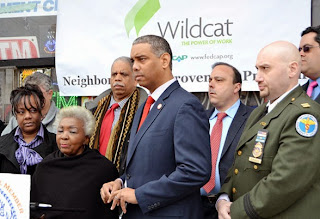 Southeast Queens lawmakers are taking the gloves off in order to deal with the area’s persistent trash problem.

City Councilman Ruben Wills (D-Jamaica) is backing proposed legislation that would toss litterbugs behind bars for up to a year for throwing their household refuse away in sidewalk trash baskets.

“If you are caught using these litter baskets illegally, you will be fined, and after the third subsequent fine you will be charged and locked up,” Wills said Monday morning during a news conference in South Jamaica as he announced a sweeping initiative aimed at cleaning up southeast Queens.

The councilman said he and his colleagues have been forced to take “drastic measures.”

“Our litter baskets are for refuse when you’re going to and from. They are not for you bringing garbage from inside of your homes, putting it on the litter baskets,” he said. “It is disgusting and it has to stop.”

The councilman said southeast Queens has been plagued by a trash problem for at least 15 years, although the issue has been thrust into the spotlight recently by Joe Moretti, a controversial community activist who documents his disgust with dirty streets — and the leaders he blames for them — on his blog cleanupjamaicaqueens.wordpress.com.

What do they actually do without being pushed to do so? I mean for people other than developers and unions?
Posted by Queens Crapper at 12:16 AM

Joe...They are finally listening to you!

this is great news,and inspirational.I did not think Rubie was capable of being shamed and stop sitting on his balls,but there it is.

That's great, but no one will ever be caught because no one cares. What's next, maybe making it illegal to park commercial vehicles on the street overnight, or how about all the for sale cars with no tags or insurance parked on the streets. I'm sorry, but this bunch is not interested in the every day problems of normal people

What exactly is so controversial about Joe Moretti? The fact that he actually gives a shit about Jamaica?

These corrupt, do-nothing Jamaica pols should give him a consulting job and erect a statue in his honor!

WHAT FUCKING WORK, this is the first time Wills and other leaders are bringing up this issue in all of these years(I mean he is the one that said Jamaica has been plagued with this issue for 15 years). Where the fuck have they all been for that time. By the way, this is just an introduction to a bill, it does not mean it will pass, but the way things have been, it sure has a good chance. BUT if Wills and his fellow elected officials were doing their job to begin with, this would not have been such an out of control issue, but they dragged their feet on it, so the community looks like crap, property values stagnated and low class people kept moving in.

Also , why am I considered controversial, because I speak my mind and state the truth, which most people do not want to say or hear. Let's face it, the low-class ghetto people and low-class immigrants have caused this problem, that is a FACT. The elected officials have not done their job in addressing this problem, that is a FACT. So slamming elected officials for not doing their jobs (jobs that I and other tax payers help pay for) and calling out the ghetto slobs who cause the problem is just telling the truth, nothing controversial about that. But I guess if you speak out on our elected officials (PUBLIC SERVANTS folks) or call people for what they are, then you are considered "controversial". Back in the day, it was called telling the truth and calling people on their fucking shit.

But at least they have stepped up to the plate (even though they have been forced to), but whether they take a swing, is another story. It will be interesting to follow this and see where it all goes.

Ultimately nothing will be done (Sorry Joe). this is another meaningless gesture by an empty suit politician

They ought to hand that fatso Comrie a broom and get him to bend over and pick up some garbage. You and your big mouth wife. And all the other asshole Jamaica politicians. One to two hours every Saturday. Leroy lose the goddam weight already! You're as disgusting visually to represent Queens as Katz is.

Come on, no one will be going to jail for putting household garbage in a street litter basket.

The problem is not the litter, which of course, can be removed. It's the people who have such low regard for the neighborhood and laziness about where to put their garbage, that you have this condition.

It's the people, not the litter.

if SE Queens has less animals, there would be less garbage.

An agenda can be compromised by tone-deafness. Swearing is rarely an effective rhetorical strategy--it turns people off who might otherwise see small improvements (like this one) in the light of optimism and enthusiasm.

Being belligerent is the last resort and sadly often necessary to get things accomplished in this town. Lazy pols mistake kindness for weakness and the rhetoric needs to be ramped up in order to get them to pay attention.

Good thing we have blogs and local papers to report on stuff in Queens.

An agenda can be compromised by tone-deafness. Swearing is rarely an effective rhetorical strategy--it turns people off who might otherwise see small improvements (like this one) in the light of optimism and enthusiasm.
-------------

BULLSHIT. This is New York City not some small town with a main street. Talking with kind words to useless, corrupt and lazy leaders get you know where. That road has been paved over several times by good intentions.

What we have going on in Jamaica and SE Queens is a drastic problem which needs drastic measures and actions because our asshole leaders have not done their part, a part that they get paid a hefty salary that we the people pay for.

Do your fucking jobs and you won't hear from me.

Good work Joe !
You are making a difference.

I don't even call it belligerence when it's in self defense; I call it intelligence