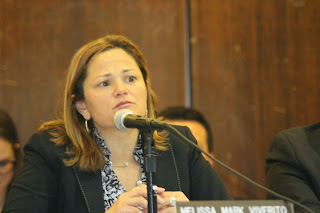 The City Council speaker would be stripped of the power to determine how much each lawmaker gets in member-item funding, under a set of rule changes to be proposed on Tuesday.

Speaker Melissa Mark-Viverito is set to sponsor the bill, which a majority of council members have said they’d support. The bill would give each council district in this year’s budget the same amount of money, which lawmakers can dole out at their discretion, sources said. The allotment could be increased by up to 25% based on the poverty level in a district, sources said.

Critics have long bemoaned how the current arrangement allows the speaker to play favorites by slashing funding for opponents or those who simply failed to fall in line on a particular issue.
Posted by Queens Crapper at 10:59 AM

Though she's received multiple well-deserved criticisms, Ms. Mark-Viverito deserves praise for this. Truly a step in the right direction - if she can follow through.

Why not just do away with all members items, just as Cuomo did with State?

Does the city have the money for these member items? I applaud Ms. Mark-Viverito for trying to do the right thing, however, maybe the right thing is to eliminate these funds completely.

The problem is that you have too many charities that are now dependent on these funds. If you take the money away, they will fold. And many of them do good work that's hard to fundraise for otherwise. Of course, there are a lot of them that do not deserve the funding.

No government will ever run efficiently and equitably on autopilot. A well functioning society requires the unending dedication of the minority that are capable of effecting positive change. Without it, the financial/executive class and the political/union class grab everything they can reach, leaving the remaining 95% to fend for themselves. Don't treat small bits of progress like this as worthless because they won't fix everything or last forever. Instead take it as a victory, and move on to more pressing matters. Namely, the city employees working without contracts and demanding back pay. Will sanitation sanction an eventual move to one person operations? It will take some time to implement, if it's pushed in their contract now staffing levels can be reduced by attrition alone. Will the older teachers already receiving richer compensation receive the same raises as the younger ones receiving less? If not, will raises for all be pushed again sooner because the poorest teachers are unfairly compensated for their work? Will we reduce the number of cops to only 10 percent more per capita than any other large city in the United States? Will Cuomo's reelection bid mean that the contracts for MTA unions will all be as generous as the TWU, and make no move to bring work rules into the modern era? Or will he give the LIRR their raise, and still allow a minority of them to fleece the taxpayers with their penalty payments giving them 3-4 days pay in a single shift?

Finally! Something positive from the City Council. Let's see how fast the loopholes develop.

As a resident of a district that had always been in the short end of the funding stick, this is a very welcome change.

Now if this passes along with term limits for community boards, things might bee looking up.

With apologies to the Evangelist Luke, I have added a revised verse 34 below to the original (Luke 10:25-33):

25 And, behold, a certain lawyer stood up, and tempted him, saying, Master, what shall I do to inherit eternal life?

26 He said unto him, What is written in the law? how readest thou?

28 And he said unto him, Thou hast answered right: this do, and thou shalt live.

29 But he, willing to justify himself, said unto Jesus, And who is my neighbour?

30 And Jesus answering said, A certain man went down from Jerusalem to Jericho, and fell among thieves, which stripped him of his raiment, and wounded him, and departed, leaving him half dead.

31 And by chance there came down a certain priest that way: and when he saw him, he passed by on the other side.

32 And likewise a Levite, when he was at the place, came and looked on him, and passed by on the other side.

33 But a certain Samaritan, as he journeyed, came where he was: and when he saw him, he had compassion on him,

34 And would have administered to his wounds and would have given him shekels and denarii out of the goodness of his heart but instead thought to himself "Why should I, the gubmint will take care of him. I paid muh taxes; I already gave at the office. Sorry Charlie, the welfare bureaucrats will administer thy wounds and give thee shekels and denarii."

Good! It's about the blackmail system is broken. "No ice cream money for you because you've been a bad boy".

How many of you conspiracy morons were screaming bloody murder before this council got to work? Im glad MMV is proving the haters so wrong

The pols will romp through their nabes still giving the money to photo ops and election calculations rather than need or worth.

A tiny group will get all the funds while the others are told to 'work together' which means the strong can pillage the weak for ideas.

Conspiracy morons? Not sure who you're referring to, but this woman has an awful lot of shitty legislation heading toward us in the next 4 years, including a NYC ID card, legalizing basement apartments and voting for non citizens.

H-m-m-m...
maybe CB#7 will finally see an end to those career do nothings Gene Kelty and Chuck Apelian!

How long have they held onto their posts?
How long has their DM, Marilyn Bitterman, been taking home her...is it about $90,000 a year?

Do away with member items. Having this slush fund available in any form is just an invitation to fraud.