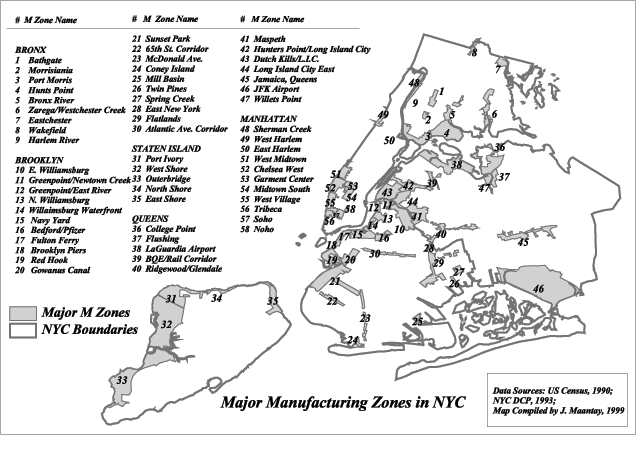 Within days, Mayor Bill de Blasio is scheduled to unveil his long-awaited plan to build 200,000 affordable-housing units during the next decade. When the proposal is revealed, an intense debate will likely erupt over whether it will work and what the costs will be.

Before that happens, a different question should be raised: Is the residential housing boom sweeping the city, as well as an intensified push to build more low-cost housing, endangering the economy by squeezing New York's industrial and commercial sectors?

There isn't a problem in the short term. True, the tech boom has soaked up all the space in midtown south—which some say has the lowest office-district vacancy rate in the country. But downtown is awash in millions of square feet of available space. The Hudson Yards miniboom will add several million square feet of modern space as well.

In the long term, however, Economics 101 will play out. Developers are bidding up the price of land because they can make a lot of money building luxury housing. If, as expected, the de Blasio plan requires those same developers to build or finance more affordable housing, it will put further pressure on both land and construction costs.

Already, the squeeze is pressuring the recently stable manufacturing sector. Industrial businesses, such as warehousing, will soon find themselves priced out of the city. Commercial space will become less and less economical.
Posted by Queens Crapper at 12:26 AM

My major concern is where are more people going to find decent paying jobs in NYC ? This will allow yet even more people to live in NYC. NYC is not ready to see 9 million people. Also, what about schools and garbage pickup? More people moving into NYC will require more services. Our schools are already overcrowded and our services are already costing taxpayers alot of money. There's only so many schools you can open, so many garbage collections you can run, so many trains that you can run at one time, so many buses. NYC first must develop a plan to fund more of these services without having to raise taxes even higher because let's face it, we pay too much Money to live here as it is now.

If you stick one more person in Flushing it is going to sink!!!

Has DiBlasio ever tried walking in Main Street?

What liars are telling him there's room for more people???

There's a tech boom in NYC?

What's the point of luxury housing if it doesn't house anyone?

I've read that foreigners just buy condos to stash their money - they just use real estate instead of banks - it's easier to hide money that way via cash transactions.

Why doesn't NYC figure out a different way to help foreigners hide their money and demand occupancy of condo and co-ops for at least part of the year? The owners would probably send their servants.

And why do we need any more people in this city?

Schools? The people going into the "luxury" and hotel construction are not breeders, thank god.

I suggest a look at Red Hook - there has been tension, but there is dialogue, between manufacturing and residential players.

I'm all for people coming to New York City, if there are private sector jobs waiting for them.

If these people arrive only to receive some form of public assistance, or become public sector employees, where's the money going to come from to sustain their benefits, salaries, and pensions?

The areas of the United States that should welcome new residents should only be those that have some private sector job growth.

The path New York City is on is unsustainable and our turn as a "Detroit" is inevitable.

“Everyone’s for affordable housing until you select a location”

Anonymous said...
And why do we need any more people in this city?

They want to come here. Build housing for them, or prices rise further.

Anonymous said...
My major concern is where are more people going to find decent paying jobs in NYC ? This will allow yet even more people to live in NYC. NYC is not ready to see 9 million people. Also, what about schools and garbage pickup? More people moving into NYC will require more services. Our schools are already overcrowded and our services are already costing taxpayers alot of money. There's only so many schools you can open, so many garbage collections you can run, so many trains that you can run at one time, so many buses. NYC first must develop a plan to fund more of these services without having to raise taxes even higher because let's face it, we pay too much Money to live here as it is now.

You could open more schools in the city if people stopped complaining when one was proposed for their neighborhood.

Garbage pickup? Many municipalities require you use garbage bins that are the right size and shape and that you bring to the street so that their trucks can pick them up without the driver getting out - one person operation, and generally moves faster than paying a second or third guy to throw the trash into the truck. Would save the city hundreds of millions a year to move to that sort of operation. Charge for garbage pickup and then you only have to pay for what it costs to haul your trash, not subsidize your wasteful neighbors.

Other services? NYPD is a big one. Cut staffing to the levels in other big cities in this country and you'd save two billion dollars a year at least.

Roads are used inefficiently. A bus lane with frequent service can carry many more people than a general traffic lane - we can definitely run more buses. And on some corridors putting in streetcar tracks would allow even higher capacity use of the road, and fewer operators per passenger lowering costs for crowded lines.

Signal systems keep trains from crashing into each other, and on the subways have to be replaced every 50-75 years. Installing CBTC on lines as old signal systems need to be replaced can increase capacity, probably by about a 1/3 typically. And the talk is increasing the city's population by ten percent over twenty years by comparison. Certainly can be handled. This has been done on the L, increasing capacity from ~15 to 26 trains per hour. Further upgrades, such as building tail tracks past its Manhattan terminal, could get that up to 40. Not to mention that CBTC and other modern technologies better accommodates OPTO - one person train operation - than existing systems. Lower staffing levels means lower cost of operation, though you'll need a governor willing to take on the TWU to push that through. Should be doable, nobody will need to lose their job if they take care of it in the next contract in five years, or maybe even the one after that, because it will take years-decades to replace the signals on enough of the system to have to cut employment levels, so you can just wait for people to retire and not replace all of them.

You pay too much money to live here now? Well that's what happens when you give retroactive pension increases that are barely affordable, if they ever are, at the peak of a bubble only. When you maintain inefficient staffing levels at NYPD and sanitation. The thing is, nobody even needs to lose their job to correct that. Just cut back on hiring some.

warehousing is an industrial use?

OK with manufacturing, but that seems specious.

Warehousing and parking lots are basically what M1 zones are for. They create buffers between residential areas and heavy manufacturing.

I do not think De Blasio cares or even understands economy. His sole concern is to provide those who voted him with semi-free locations, food stamps and so, namely the "minority" which is actually the majority.

If you build the cheap housing people will come but where will they work ?
NYC doesn't need 200,000 more people on welfare.
This fool diBlasio is really counting on those federal $$ with this "come and get it" but what happens when the federal goverment goes bust, gets into a war and cant subsidize all these people (future democrats) as promised by that liar Obama?

Lindsay did this and we are still paying for it today, it also DESTROYED neighborhoods.

Queens is NO DOUBT going to be the next Detroit only worse. Start saving up for steel bars on your windows, self defense devices and fire extinguishers.
Personally EVERY single person I know who owns a small business as in: the painter, knitting mill, auto-body, machine shop, bake shop, bike shop, kitchen carpentry ALL HAD IT with the hostility toward small commerce from both the Obama and NYC admins. They are all throwing in the towel with most saying “it no longer pays to work” “better live cheap and use up the unemployment wile the $$ is still there”
The civilized populace has been outnumbered by the sheeple & rats who only make things worse. Unless you live on a landmarked street of private homes that cant be F_cked with time to GET OUT ASAP !!

Come on Joe, it's not that bad. Stay strong!

People live there where they feel secure and comfortable