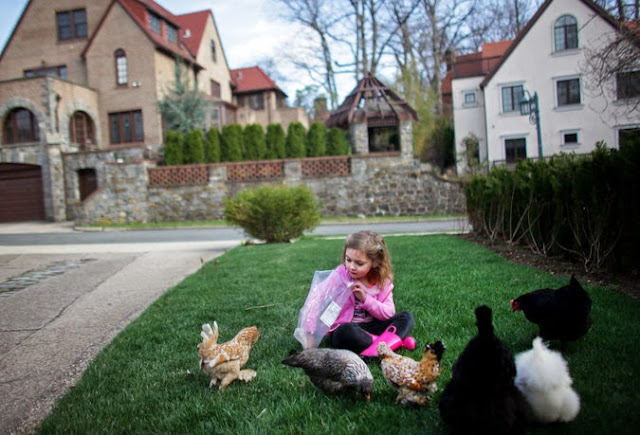 Keeping chickens in New York City has become a popular hobby, especially in precincts of Brooklyn where foodies and do-it-yourselfers prize locally grown food. Ms. Saye, 48, bought a dozen heritage chickens last July to provide free-range eggs for her daughter, Scarlett, 5, because she wants to serve foods that are free of hormones.

“I got them for nutritional reasons,” Ms. Saye said. “You can’t buy these eggs in a supermarket.”

Ms. Saye bought a $2,500 coop and had fencing installed to protect the chickens from predators. But a month ago, she learned of a different type of threat to her chickens: the stringent restrictions that homeowners in her neighborhood are supposed to abide by.

Ms. Saye lives in Forest Hills Gardens, a private neighborhood nestled in one of the more pristine sections of New York City. It is renowned for its stately country garden style, multimillion-dollar Tudor and Georgian homes, and for its strict regulations, which forbid the keeping of backyard chickens.

Ms. Saye has been ordered by the Forest Hills Gardens Corporation, which manages the neighborhood, to get rid of the chickens. In a recent letter, corporation officials cited the nuisances section of a century-old homeowners’ covenant.

She noted that the nuisances section also does not allow a “cattle yard, hog pen, fowl yard or house, cesspool, privy vault; nor any cattle, hogs or other live stock or live poultry.”

“These are 101-year-old rules,” she said, adding that she decided to order the chickens after seeing Martha Stewart talk about them on television. She even bought the birds from the website that Ms. Stewart recommended, Mypetchicken.com.

Mitchell Cohen, the president of the Forest Hills Gardens Corporation, said the regulations detailed in the homeowners’ covenant and restrictions are meant “to protect the whole community” and an “amazing document that has held the test of time.”

She might receive a tax benefit for donating the hardware and hens to John Bowne High School or Smiling Hogshead Ranch Urban Farm. Both Queens institutions would see to it that the hens are given great care, not slaughtered, and provide education along with eggs.

They are acting just like a certain religious group in another section of Forest a Hills that has virtually steamrolled over city regulations when it comes to tearing down quaint houses and then building oversized eyesores....laws mean nothing to these people as well...

What country am I living in? Mexico or the USA? I have never seen such third world crap! Chickens belong on farms or good and dead on top of my kitchen table.

I so lol that Americans think they are a free people.

Americans used to be able to have pigeon coops and Chicens on their property as it was their property. Than the zoning laws and statist enterprise came and mangled property right in the name of the public good. So now the public good standard rules the day,...which basically means....if money can be going to the coffers of the govt. you can do it. America...u suck !

I have seen one of these hens on occasion roaming the busy Station Square in the middle of pedestrian and vehicular traffic.

There's no shortage of farmland out in Suffolk county if she wants an estate for all-natural living.

The difference is that Forest Hills Gardens is a planned urban development with a private corporation that provides services to the community. In return for the benefits of making the private decision to live in the community, there are rules that run with the deed to these particular bits of private property. No one forced this person to live in that particular area; it seems to me the person bought the property and had an insouciant attitude to the area having rules like a co-op or a condo.

It is not a statist situation.

I would rather have these chickens than some of the people living in Queens.

How did the corporation allow that hideous looking McMansion to be built across the street from the chicken coop family?
Who's kidding who?

Anonymous said...
I so lol that Americans think they are a free people.

If America is so bad, why are you here? Or is it more (paraphrasing Winston Churchill) America is the worst in all the world, except for all the others.

I'm sure there's some sort of amendment procedure for the covenants that Sylvia Saye can pursue. But until then, she should follow the rules she accepted when she purchased the property.

I don't know what it is, but is the method she is using to dispose of the hens' urine and feces compliant with city, state, and federal law?

That is not actually a "hideous looking McMansion" across the street from the chicken house. All those homes are old. The McMansions are on the other side of Queens Blvd and are easy to spot. Look for concreted-over lots, High walls all around, bright chrome fencing, and absurdly out-of-proportion balustrades.

Forest Hills gardens is probably the one part of queens that when you buy in, you know it won't "go bad" on you because of all of these restrictions, which on the whole, do a lot more good than they do harm. Take a walk there some Sunday!

Funny how some people know that the rules just don't apply to them-- and they get away with it, right?

Please name the nation that is more free than the United States. Feel free to also offer examples of how America sucks in comparison to other nations.

Maybe the family with the pet pig in Clearview Gardens can move next to this lady.

Maybe someone should educate Mitchell Cohen about certain other "covenants" that kept the area "respectable" during its first 50 years or so. What's good for the goose (or chicken) is good for the gander.

Maybe she is cross-training like Rocky and chasing chickens for speed and agility. Mickey said "chicken-chasing is how we used to train back in the old days. If you can catch this thing, you can catch greased lighting."

"All those homes are old."

Not so. Part of that large lot was sold a few years back, and that home put up on it. In the last 40 years or so, I can think of about 4 homes put up in the Gardens.

It is a little ugly, but nothing compared to the monstrosities in Cord Meyer. You can thank the Gardens covenants for that - the same covenants that this lady now violates.

Also a little bit of trivia - when that was one giant house/lot across the way, it was scouted as a location of the Corleone residence in "The Godfather". They ultimately ended up going to Staten Island - and there it's two separate properties that they make appear look like a single compound.

It reminds me of story after story of someone that knows they just bought a house, then insist on doubling its size making everything else in the row stupid.

There is an undercurrent in city government to allow this stupidity to destroy a community's fabric opening the door to development (and nice campaign donations).

You know the rules even you move in.

Two chickens , O.K, a dozen can be an issue.
Old rules that don't apply in today's world.

I had chickens in Ridgewood my problem wasn't the cops but other 2 legged animals jumping over the fence to poach them at night.
I been told these 3rd world shitz want fresh blood & heads for religious rituals. I had to move the hens to Southold.
And YES Banton hens are much better behaved than the majority of people living in Queens these. days

Joe, live chickens are used for kapparot.Are you anti-semitic?

I would rather live around chickens than ANY people. I have pet chickens, most bantams and some layers. They make better friends and are more loving than rude people. I live around some shitty people that I wish would just disappear. My chickens are my comfort in dealing with these insensitive jerks.