AirBnB: Why take on a roommate when you can rent out to complete strangers? 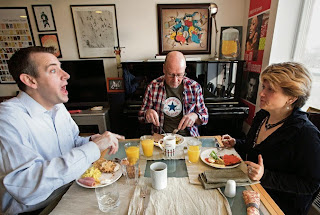 The vacationing couple from Hattingen, Germany, showed up at Michael Naess’s shipshape Queens apartment at the end of February. They had never met before. Nonetheless, here they were, digging into scrambled eggs, sipping coffee and chatting companionably with him on a Saturday morning. A German radio station, plucked from the Internet, rendered a flavor of home.

Over the past 10 months, Mr. Naess has had a parade of 72 strangers living with him, respondents to his overture of: “Beautiful room for rent in Astoria” on the website Airbnb. They have drunk his beer and indulged in his muffins and dirtied his guest towels. They have come from Italy, Canada, India, South Korea, Belgium, France, New Zealand, the Czech Republic, Bulgaria and so on and so forth. Among the so forth are the domestic bookings: Austin, Tex.; Waterloo, Calif.; and Washington, D.C. Members of this international bazaar, usually in pairs, have stayed from two nights to a month. Mr. Naess may bump into them in the mornings; then they might intersect in the evenings, decompressing together in the living room. For the most part, they glide past one another.

This is life as a hyperactive New York City “host” in that swelling substratum of the hospitality industry that unfolds in people’s homes, all part of the modern world’s sharing economy, spinning by with serial comings and goings.

Some things to know about Mr. Naess. He is 37, Texas-born, tall and lean, a sunny, genial man with an endlessly repeating smile. He is one of close to 350,000 hosts worldwide on Airbnb, the short-term home rental company that matches those with rooms to let and those who want to rent them in 35,000 cities. In New York, Mr. Naess is among 15,000 hosts listed on Airbnb, and easily among the busiest individual ones.

Some things to know about hosts. By and large, they do not accept strangers in their homes because they relish phenomenal amounts of company or washing soiled bedsheets. They do it for the money.

Well, duh. Aren't these people special? They rent out their spare bedrooms instead of taking on roommates, making it harder and harder for people to find decently priced housing. Then they whine that they have to do it in order to be able to afford their place. I'm sure they report all their extra income to the IRS as well. In the meantime, we have the mayor about to supersize low-rise neighborhoods because there isn't enough "affordable housing".

Look at that picture,even his "guests" are ignoring him.maybe people trying to find affordable apts via rooming would find him too annoying to live with.He looks like Billy On the street,or billy on airbnb.

and yeah,this dick was the target demographic and constituent of the previous fun size mayor and surely part of the 23% that voted for the zero vision mayor.Shame on The NY Times for continuing promoting this behavior with this piece,and also for charging people to read their site.

I can only imagine moving into one of those 80-20 buildings and bumping into that guy above and the likes of him and his transients.I rather live in a basement with mold and exposed wiring.

How much rent are they charging? These arrangements would make me most uncomfortable.


The IRS should look into the AirBnB accounts and identify the renters in the US and those US citizens renting outside the US while enjoying th US benefits so they can pay their respective taxes on their rents. Taxes are the grease that helps the wheel of progress to kep on rolling.

I really do not understand. it is not mine or your business to whom someone is renting his property.. Did you guys lose your mind? Since when it is illegal to rent your own place to whom your pleases?

Sounds like you're the one who lost your mind.

The risk/reward ratio looks insane to me. The clients have access to you and your property. The risk of personal harm, damage, and theft seems very high relative to financial reward available. Actual hotels security and insurance to deal with this.

The regulation of hotels by local governments seems to me to be a function of government that is not controversial.

Since when it is illegal to rent your own place to whom your pleases?

If it violates your lease/mortgage/rental agreement/bylaws, you are in breach and could be kicked out.

It also real shitty to put your neighbors at risk of strangers being in the common areas of your building, or even just increasing the traffic within.

These tourists spend LOADS of taxable $$$ in Manhattan where most hotels are at capacity peak summer. Both the feds, state and city get a piece of this extra $$$ so nothing will become of this.
Its unreal how these foreigners stand in line to fork over $800 + to see a crummy Broadway play or Tennis yet tip a bartender or waitress busting ass 50 cents

All rental income is reported to the IRS by airbnb. Therefor the owner is paying his taxes or the government will know.