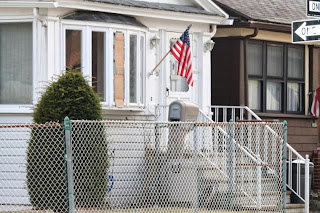 Salvatore Congemi has lived in Woodhaven for more than 10 years. Rowdy kids from nearby JHS 210 are not a new problem around his corner home at 89th Avenue and 92nd Street, but lately, things have gotten way out of hand.

“We’ve always had fights and stuff,” he said. “But never anything like this.”

Recently, Congemi said, students from the school have been targeting his home, throwing rocks at his front window and taunting him. Last week, the situation reached a dangerous turning point.

“I was sitting in my living room and at just about 10 minutes to four, BANG!” he explained.

A rock shattered the middle pane of his bay window. Congemi said it was thrown by a student at the school. Several more rocks and sticks that have been thrown at his house still litter his front lawn.

Of the group of students who have been harassing him and throwing objects at his window, one was arrested, but the problem hasn’t ceased and the student who was arrested has been released, Congemi said.

He added that the students have even targeted the American flag he hangs outside his front door.

“I really feel this is a bias crime,” he said. “Maybe because of the flag, who knows.”

Jeffrey Schiff, the commanding officer of the 106th Precinct, said at last Thursday’s Community Board 10 meeting that there have been a recent string of robberies in the area, many of which are being traced to students from area schools, including John Adams High School.
Posted by Queens Crapper at 12:42 AM

Lock up the savages!

I would invest in a good outside camera and security system. Catch them red handed and your problem will be over.

Send these kids and their parents back to their banana republics!

This is why parents should be allowed to whoop their kids asses! If I would have done something like that and if my father found out about it, you better believe that my father would have beat my ass!

I once had a jehovah witness stalking situation and they wouldn't leave me alone so I called the local precinct and said what would happen to my dog if it bit a jehovah witness and they said first offense, nothing. So I let her go and chase them, lucky for them she didn't bite, but they never came back :).

I remember 210,I used to live near there and playing outside was a chore around 3 pm when school ended.

this was in the 70s,and of course nothing changes,except the kids today are more violent,spoiled,arrogant,and dumber than before,especially when they are in large numbers,which is probably the case here.

this has nothing to do with racial makeup of these schools.Although,as mentioned before,it will be brought up.

there are savages in any school when stupid kids get together,even in private and catholic schools.

Tell me that these are black and Dominican boys between the ages of 11 & 17 years old.

disgusting that only one was arrested and has been released. this is elder abuse.

How terrifying that these little bastards are permitted to destroy someone's home & their piece of mind.

station police officers outside this residence when the little animals are let out of school. Put detectives in unmarked cars across the street. what about the principal of the school? I would sue the City including the DOE.

they are doing this because 1. they are older and 2 are not black.

JHS 210 is in Ozone Park and this guy's house is 6 or 7 blocks north in Woodhaven. Theres something else that happened between this guy and some school kids that he's not telling. Why would they pick a house 7 blocks from the school in the middle of the block to target? there's definitely more to this story. Probably just a crotchety old man.

It's 4 blocks north and on the way to the J train. It's also on a corner, not the middle of a block. And he's 60, hardly crotchety old man territory. It's funny how people assume all kinds of things about those who complain. WTF is with you people?