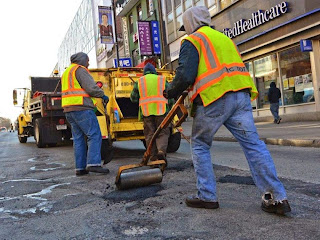 Downtown Flushing is hard enough to navigate with all the buses, people and general congestion, but add to that the poor condition of the streets and it becomes even more than problematic.

Conditions a couple of weeks ago were so bad that southbound traffic was backed up to Northern Boulevard because cars were trying to avoid the deep crevices, one Chronicle reader reported.

Community Board 7 called the city Department of Transportation last Thursday to report the conditions and on Sunday a crew was out filling in some of the potholes.

But Yu believes the problem goes deeper than that. “I just met with the DOT and particularly pointed out Main Street and 37th Avenue, which is in horrible condition,” he said. “The pothole there looks like a crater.”

Although he said the agency was cooperative, Yu thinks Main Street needs a complete overhaul. “Lots of work needs to be done,” he said. “The road is old and needs a total repavement.”

Yu knows the major problem is financing a major repaving. He said he is working with Councilman Peter Koo (D-Flushing) on trying to secure funding.

Why should it be up to Yu and Koo to find funding? Shouldn't this kind of work be included in the agency's yearly budget?
Posted by Queens Crapper at 12:29 AM

Cheap cold dry-patch and a 75 LB water filled grass seed roller is how you fix potholes ?
That last about 3 -10 days tops on a commercial street like that FRIGGAN IDIOTS !!!

Ever see the clods DOT has filling potholes? I always think of the Three Stooges comedy shows.

They use those rollers in pizzerias.

We need to get after the politicians (and their moronic support structure in the community boards and press) that infrastructure is needed before people.

This is what happens when you add 1,000,000 and expect the developers not only to ignore the costs, but to add to the burden by giving them tax breaks.

Stop the building and overdevelopment and repair and repave roads and highways. Then please put the white lines down after the work is done and fix faded line dividers. Please then see how we can make streets safer for pedestrians. Then after all that building can begin. Ughhh this stupid city, a bunch of imbeciles. Common sense people.

The city is pushing this vision zero thing. If you want to reduce accidents you have to better maintain the roads. Our roads are horrendous, and probably are the worst maintained in the country. The lane markings and crosswalk markings are always worn away, and you have to guess where the lane is. Signs are missing and faded all over the place, and you have to weave all over the road to dodge potholes that will destroy your car if you hit them.

We have all this money apparently to throw at pre k, the dream act, and to give prisoners college diplomas, but when it comes to maintaining our basic infrastructure, there is never any money.

If they're going to repave all the roads I hope this time they make accommodations for those who aren't in private motor vehicles - bus lanes, bike lanes, wider sidewalks etc...Not everywhere, but in much of the city where those users are a sizable chunk of the road's total users. It's not like user fees from cars pay anything but a tiny portion of the cost of local roads anyway.

Potholes are the least of Flooshing's problems. Very few shop here but Asians because the place stinks!

Are 99 cent stores and booths selling the same old crap you can get anywhere else an attractive draw?

This is a satellite of China. filth and squalor abound!
Unless you want to slum to visit a third world nabe...why bother coming to this fetid dump?

Peter Koo and Dian Yu couldn't care less about you! They're in it for themselves. Remember, Koo lives in Port Washington!