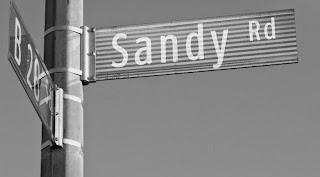 During the last few weeks there has been some confusion about a street sign that was recently installed on the corner of Beach 28th Street behind PS 43 -- Sandy Road. As one school staffer pointed out two weeks ago -- “It had never been there before.”

After several emails the Department of Transportation explained the sign, and earlier this week the Queens Borough President’s Office explained the history of the name.

“As part of DOT’s contract to replace signage in the area in response to repairs and replacements in the wake of superstorm Sandy, the sign you’re inquiring about was installed on February 4, 2014,” said a spokesperson for the DOT. “Sandy Road is the official mapped street name. The connection to the storm is coincidental.”

Interestingly, the city's official map has no such official street name on it.
Posted by Queens Crapper at 12:28 AM

Just another label to attract hipsters and developers
I can hear their pretentious voices now "First I arrived in East Williamsburg then I moved to SpaHa...but it got boring so my parents helped me lease a new condo on Sandy road"

is this some sort of sick joke and the city's claim is bullshit.

you rename streets after people who made great accomplishments in their lifetime,certainly not after natural disasters.

They claim the street was actually renamed in 1990.

to give the benefit of the doubt,which when it comes to this boro is hard to do,it is in a desolate and high crime area where no one treads,so it would be easy to overlook.

but it is in the wave,a paper that is based in the rockaways,so they have noticed this a while ago or so one would assume

its not mentioned here either:
http://forgotten-ny.com/2005/11/edgemere-queens/

Sandy was in October of 2012. Why did it take DOT until February of 2014 to replace street name signs it says were destroyed in the storm?

They sure know how to put up the bike lane and no parking signs up quickly. A street name sign missing can be life and death. Someone not knowing where they are needing 911 assistance, or an ambulance passing the street it needs to turn down. Its unbelievable that signs are still missing over a year later.