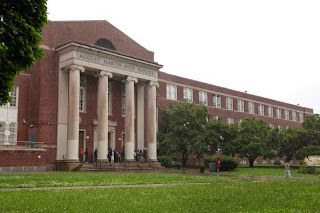 They don’t want no education — especially if it’s at August Martin HS in Queens.

The troubled Springfield Gardens school is the least popular in the entire city, Department of Education statistics show.

Under New York’s open-enrollment system, all middle-schoolers apply to attend the high school of their choice. For academic powerhouses like Stuyvesant and Bronx Science, the number of students who want to get in far exceeds the number of seats.

But so few asked to be placed in August Martin that it still has room to accept 774 students, DOE records revealed.

That number exceeds the 445 freshman seats August Martin normally has, since the DOE expects even students who pick the school in the second round to drop out or go somewhere else.

The DOE refused to say how many students have been assigned to the school for the fall so far.

It raises the question why August Martin is still in business, considering it had a dismal 39 percent graduation rate in 2013 and got an “F” in student performance and progress.

The school also has a reputation for violence. Students committed at least 72 offenses in the 2011-2012 school year, including eight assaults, two sex offenses and 19 instances of intimidation, state records show.

I thought the writer was describing Rikers Island.

Time to start busing kids over there.... bayside, Cardozo and Francis Lewis are way too crowded.....bus some Asians into that school from flushing!

It's still "in business" because Bill Sandinista Duhblazio and his union buddies insist it stay open to counter the evil charters.

What, no mention of the student demographics in the NY Post article?

Must be all those American Indians and Alaska Natives causing all the trouble!

Perhaps DOE wants one place in every borough where they can accept last-minute "over-the-counter" registrants.

I go to august Martin high school and everything they said in this article is completely. the school is majority black including me and they are usually the ones causing problems. August Martin is a school we're your laughed at for being or sounding smart. Because of the schools current condition they are little to no highly educated kids left their and the ones who are their usually gets judged or titled as "One Of Those Bad Kids" by the teachers before they even get to know you. The staff do treat us Like animals, I liked the way the Previous comment stated that " I thought the writer was describing Rikers Island." because it's more like prison at August martin. We have to take our shoes off every morning because we pass through metal detectors and scanning. They are often cops or security guards at every corner and stair case in the school, we have to wear a uniform and are often yelled at or question by the staff. In all honesty the school is a prison and it's preparing us for real life prison. I'm not going to put the blame on the principal only ,even tho it's partially her fault, but it's also the teachers who rather see a kid fail that to see them succeed' the teacher who tells the student that they do not care about what grade they get and could care less if they fair, the teachers who just don't teach, it's also the students fault. Like the ones who rather walk the halls than to get an education, the ones who are seniors( 12th grade) and not ashamed to say that they only have 11 credit, the student who laughs at the one child who's trying to learn. August martin High school or August Martin Prison needs a change sadly it didn't happen when the NYCDOE decided to come in for the state evaluation, thats when ever teacher decided that they wanted to work and put on a show portraying the pseudo education that is offered at August martin. I a student at August Martin high School and Please We Need Help.