It was a very interesting Friday night in Maspeth last week... 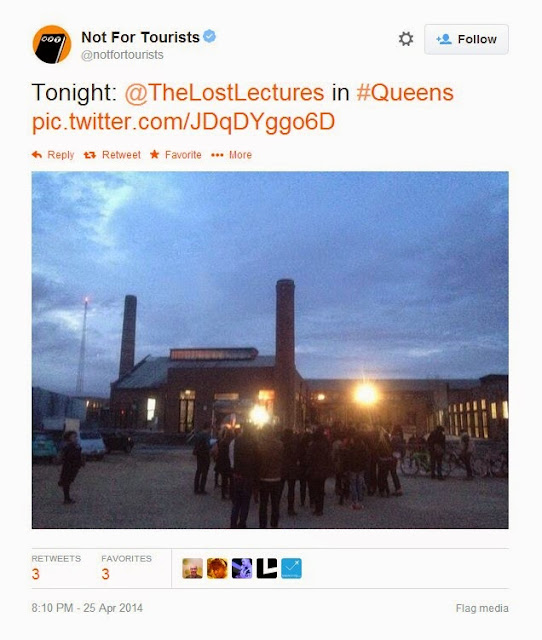 Here we are at the Knockdown Center. Approaching the venue, it looks innocent enough. 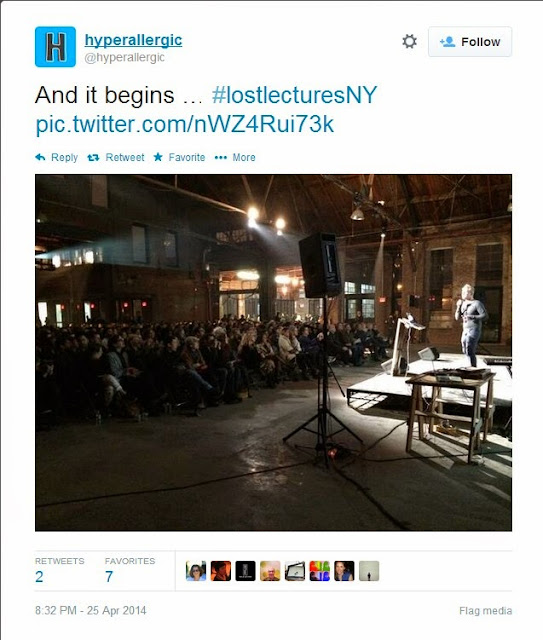 Nice sized crowd. This looks like it may be one of those wholesome educational activities that Maspeth has been promised by the guy that owns this place. 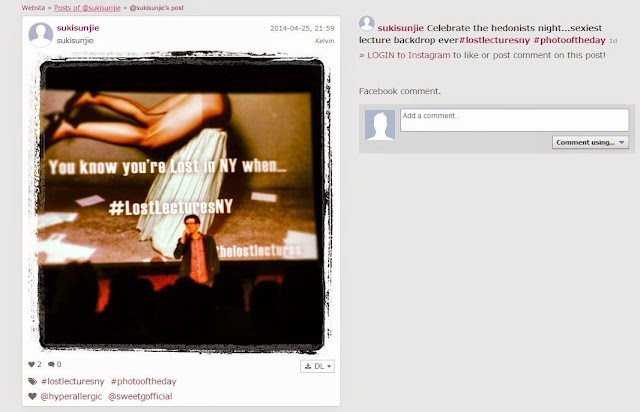 Oh, wait, no... "Hedonists". That word popped up a lot in online references to this event. 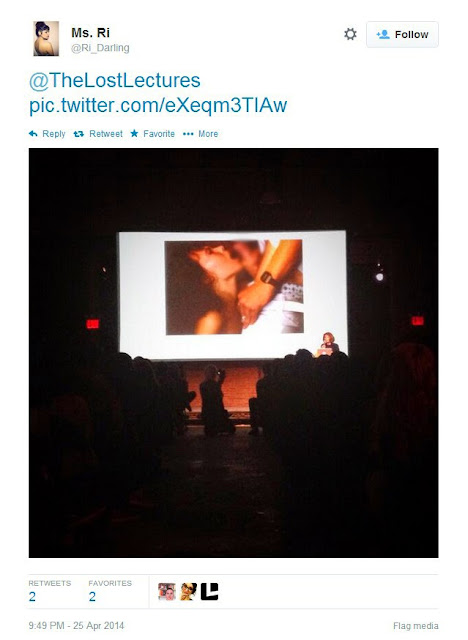 And there we are. The original photo was NOT blurred. 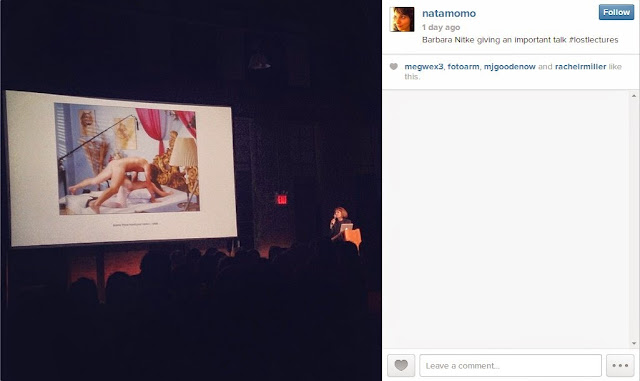 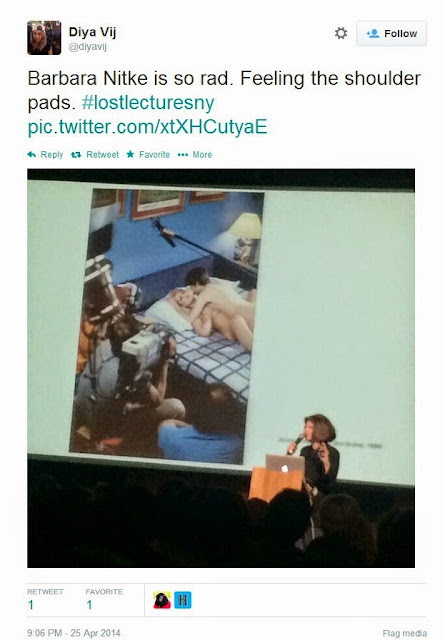 As per Crowley and the folks that run the place, we were supposed to be getting an "arts center" along the lines of PS1 and MoMA. When are these types of events scheduled at those institutions? I keep missing them. 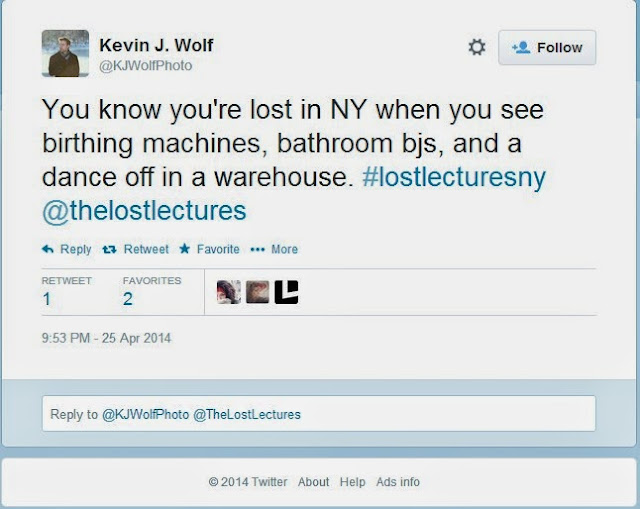 Originally, I figured the mention of BJs in the bathroom referred to something depicted in the slideshow. 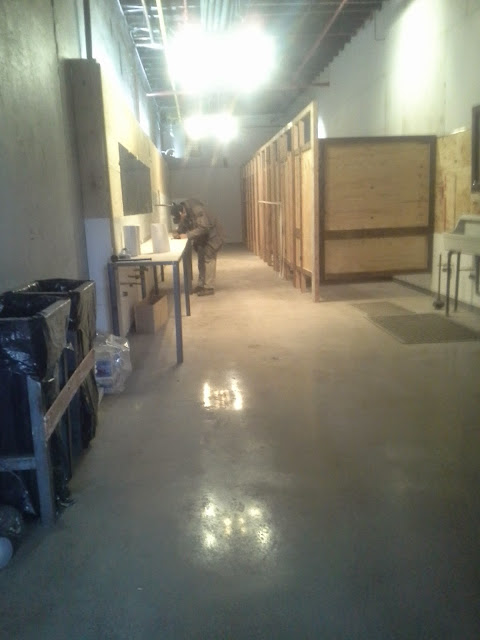 But then I discovered that this place only has one built bathroom. So who knows what goes on inside it?

Ladies, would you feel comfortable sharing this space with young men drinking alcohol?

Aaaand this photo brings up an interesting question. Since the place is still under construction, it needs a temporary place of assembly permit to host large crowds of people. So which pencil pusher at DOB thought it was okay to allow them to keep gigantic boulders in the aisles, blocking the paths of egress? 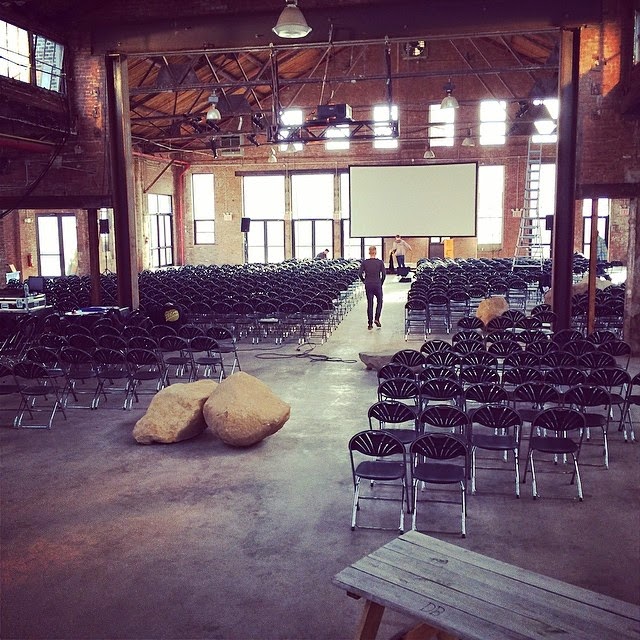 And they plan to have the boulders sitting there during next week's rap concerts, which are expected to draw 5x the number of attendees. From Bushwick Daily:


Upcoming art shows include “Sound and Fury,” an exhibition of large scale sculpture works by Joel Shapiro, Richard Nonas and more, curated by Clocktower Gallery...The show will be up and running during the MIA show, allowing for a very unique opportunity for concert and rave goers to interact with fine art sculptures.

Interact? How about break their necks? And management swore up and down to CB5 that they would never have a "rave" event at the Knockdown Center. So much for that.


Meanwhile, the temporary liquor permits the center sought for the two concerts to be played by popular Sri Lankan rapper M.I.A., scheduled for May 8 and 9, were denied by the SLA.

After nearly 30 minutes of testimony and questioning, the State Liquor Authority decided to give the operators of the Knockdown Center, the controversial arts and events venue at 52-19 Flushing Ave. in Maspeth, until the close of business on April 29 to submit additional paperwork concerning security at large events.

The facility is also seeking a permit to host up to 5,000 people at a time.

A vote on the center’s liquor license application will occur at the agency’s next board meeting, on May 6.

Terrence Flynn, the attorney representing the Knockdown Center at the hearing, asked for an adjournment from the board to allow more time for the center’s owners to formulate a comprehensive security report and to allow for a meeting with the 104th Precinct.

“I would ask to leave the record open for two weeks to provide a complete security report and to have a meeting with the precinct,” Flynn said. “If we can control the numbers of people that at these events, then we can satisfy the community’s and precinct’s concerns.”

Area civic activist Christina Wilkinson testified that young children are believed to be living at the center illegally, an allegation which Flynn denied.

“I know of no children occupying this building at all,” he said.

Records reveal that complaints about illegal occupancy have been lodged since 2011, but the owner has not responded to requests for inspection.

And this place has been hosting events since 2012 and just decided to come up with a comprehensive security plan? And everyone is supposed to be okay with that, I suppose.

Holy crap, are these people kidding? They certainly wasted no time becoming hypocrites. Elizabeth Crowley needs to come out against this NOW.

Excellent point about the rocks blocking the way out. Unfortunately, DOB only cares about money and not about safety.

Personally, an event like this doesn't bother me. What does is the lack of honesty if the people running this place and the fact that the SLA refuses to acknowledge that and gave them a mini extension. Enough with the nonsense.

Can't wait to find out what's in this security plan. Guards posted in the bathroom? Along the streets to make sure the drunks behave on their way back to the train? Actually, they'd have no jurisdiction there.

It was just a Lost Lecture - a lecture series from London. It wasn't a 21st century reincarnation of Plato's Retreat.

It's too bad that we can't have a lecture hall/art gallery/dance club in Queens.

I like the restaurants in Corona but hate the music.

"it's too bad that the only culture we have in Queens is courtesy of some other country."

You obviously haven't been looking very hard and don't get out very often. Queens frequently has concerts and art events as well as a number of museums, galleries, etc. dedicated to American art. I fail to see what this particular slideshow has to do with art, though. Or why liquor is required for anything they do there.

Just the type of family fun that Maspeth folks have been clamoring for!

But seriously, I care more about what goes on after these events than during. How do people get home from here and doesn't that impact a lot of people who choose not to attend? Riding a bus through Maspeth now is unpleasant, now imagine hundreds of Brooklyn asswipes piling onto the one bus that runs overnight...yeesh.

"It's too bad that we can't have a lecture hall/art gallery/dance club in Queens."

Plenty of lecture halls - Flushing town hall, just about every museum, there's even one at the wildlife refuge in Broad Channel. Plenty of art galleries and museums in LIC. There's also one I like in Douglaston. Dance clubs - well, lots of those in Astoria and there's a concert venue on Queens Blvd in Elmhurst.

If you're missing the plethora of clubs that were around in the 70s and 80s, well, the reason all those places closed is because people would rather hang out in Manhattan, plus they made life hell for local residents who just wanted a good night's sleep. So it's perfectly understandable that civic minded people don't want to see this place get a liquor license.

Everything in NYC is only minutes away by bus or subway, I don't understand the desire to have everything one does within walking distance. Like these people in highrises that isolate themselves from the rest of society - everything on site!

Get out to different neighborhoods and experience the city. And stop whining that you don't have the things you like 3 blocks from your house. Your rent is affordable. Enjoy it while it lasts.

maybe those blue and purple buses give them lifts home.

and wouldn't a community arts center hold events during the day too and have the locals participate?wouldn't it be nice to have school trips and have kids paint and mold clay there?Right?you scrawny alcoholic idiots?

this has got to be blown up.

Elizabeth Crowley should be impeached. This dimwit actually supports giving a liquor license to the KDC for events up to 5,000 people and sanctions holding events like this in our town? Why? What's in it for her? How will this place improve the quality of life of Maspeth residents?

The bathroom in this place is brand new and it looks like that? Sheesh. Someone's being cheap.

Does't the board of developers for Queens Council on the Arts plan to spend $40,000 on this place while they still do not have funding for grants awarded months ago?

Look at that big lavish program run by Queens College on Santaria Artwork. Certainly explains why the political and cultural elite in this borough wants nothing to do with Steinway?

How about the opening of the Kaufman Arts district where the highlight was a warbled rendition of something by the Frank Sinatra School?

Poppenhusen remains chronically ill so that the pols can turn it over to the Asians at which point the money taps will open?

The money pit of Queens Theater so the spouses of developers can show off the latest in fashion ... from 1968?

The point it the cultural scene in Queens remains a big joke.

Noguchi probably spent a significant portion of the borough's cultural budget trying to recover its collection cause they stored it just feet from a river pre-Sandy.

Water DOES find its own level in Queens.

Wow, a 5,000 people event with liquor and just that one bathroom? Streets of Maspeth will run yellow that night.

I think the cultural landscape of Queens is pretty much determined by people that have not the foggiest feel or understanding of culture beyond the opportunities it brings for development and photo ops.

Te reason we should completely abolish anything 'Queens' and turn the management of our communities over to 'the City' is one standard should fit for all.

You seem to have a different definition of culture from the rest of us...