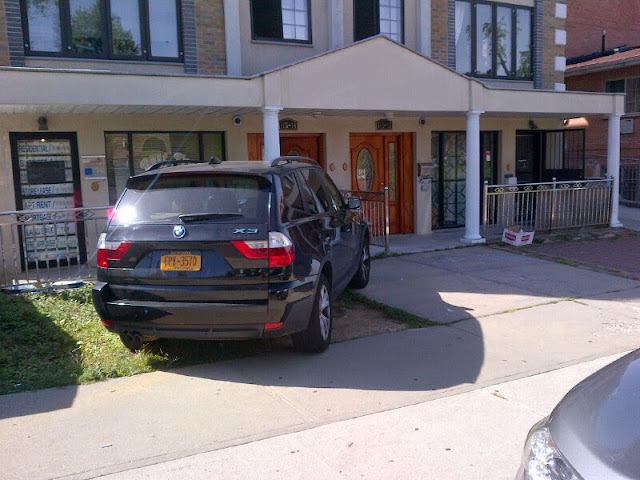 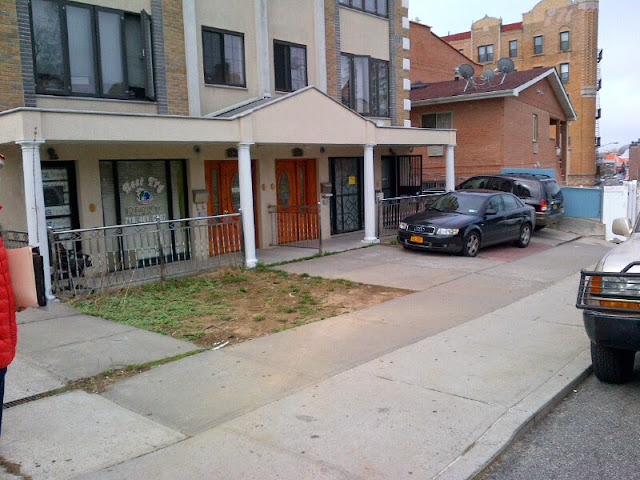 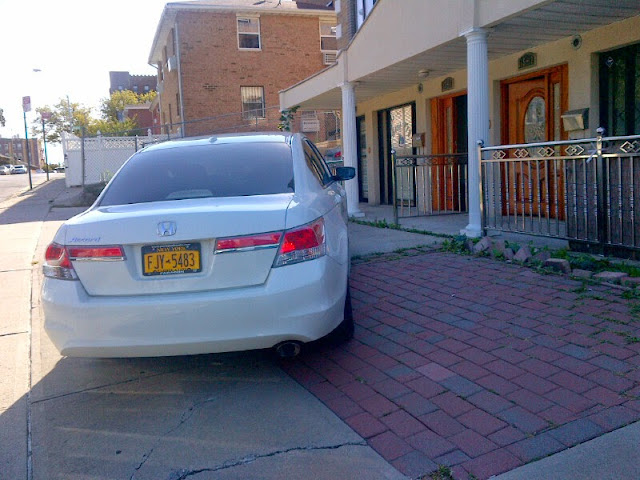 Some months ago there were postings on Queens Crap about cars being parked on the sidewalks in Queens. It saddens me to send you some photos taken over the last twelve months, the most recent photo taken a couple of days ago, of cars being parked in front of a multi-family home at 165-12 and 165-14 Crocheron Avenue, North Flushing, Queens. Although the attached homes have driveways on either side, there are cars parked in the front yards and sidewalk every day. Most of the time the cars are parked on “private property” and they have probably escaped being issued parking violations by the Police Department. On other days, the cars are partially blocking the sidewalk. You will also notice in the photos that one of the homes has paved over their small “green space” while the other half of the attached home allows parking on overgrown weeds in the spring/summer and mud bearing tires marks in the fall/winter months. It may interest you to know that a gracious one family Tudor style home was torn down some years ago to construct the current multi-family dwelling that allows cars to be parked in their front yards and sidewalk. It is my opinion that not only is the homeowner(s) breaking the law by allowing cars to be parked in the front yards and sidewalk, but they are being disrespectful and inconsiderate to the community of North Flushing, whose residents take pride in maintaining their homes and property. I wonder, is the homeowner collecting “rent” from these cars? All of these cars belong parked in the street and driveway and not in front yards and sidewalks!

I strongly urge the Department of Buildings to please inspect this property and all other properties in Queens that face a similar situation. 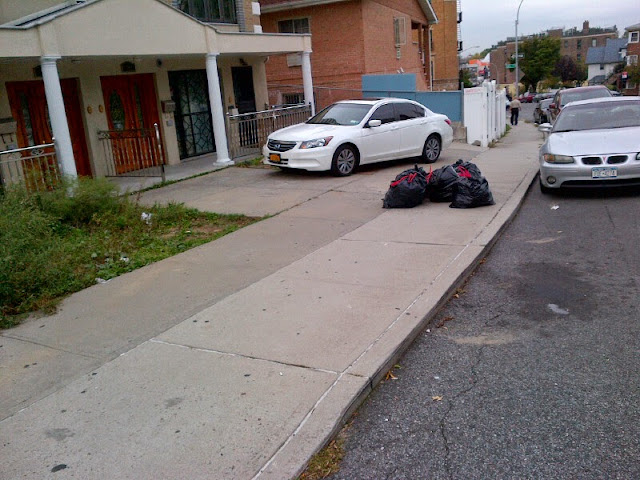 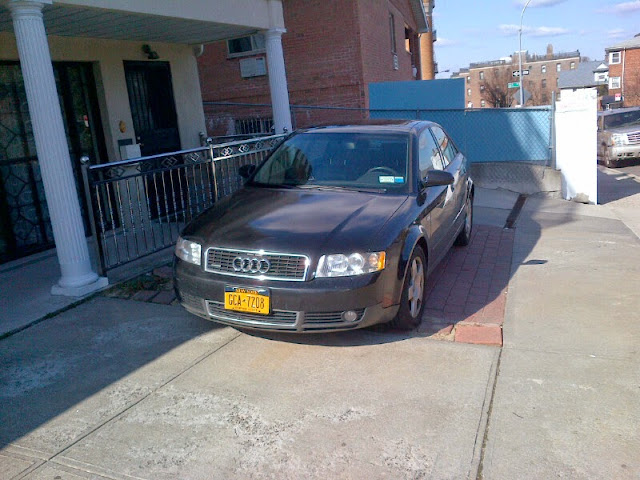 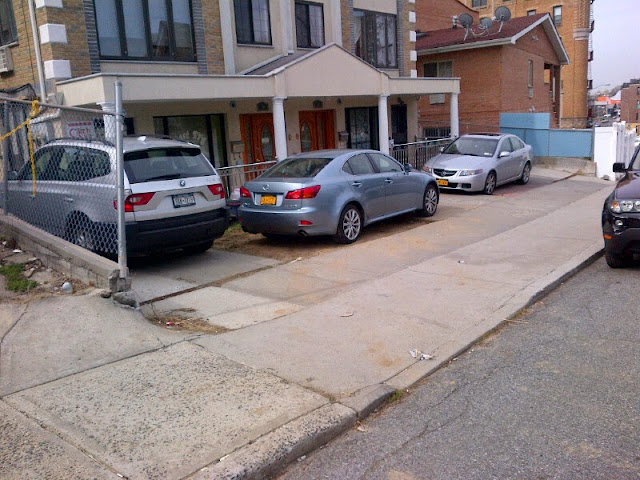 Amazing that so much of Queens has this kind of shit. We here in Jamaica had that as well, I say had, because after talking to the 103rd in regards to this type of nonsense, Sgt Cedillo and his crew from the 103rd precinct have made sure that this kind of shit does not keep happening.They have not only given out tickets but have approached all apt or house dwellers who have engaged in this and gave them warnings. They have also warned all auto body shops in Jamaica about parking their smashed and unlicensed cars on the streets and on sidewalks. They have not only issued many tickets, but have towed away many cars.

I suggest going to one of your precinct monthly meetings and bringing this issue up and mentioning what the 103rd precinct is doing in regards to this issue in Jamaica. The 103rd recently got a new commander and Sgt. Cedillo was recently brought in to deal with this type of quality of life issue.

You can forget DOB, they are pretty much useless with this issue. Hell, they will not even take care of such things as illegal driveways and illegal curb cuts.

I agree forget about DOB. If they do issue a violation it will never have to be paid by the building owner and DOB will never enforce the issue. Wake up New Yorkers.
Call your elected officials, the laws need to be changed.

This kind of violation spreads like wild fire. Before you know it, everyone will be doubling and tripling their parking spaces.

Get your Councilman on it before your entire neighborhood looks like that!

Parking on the sidewalk is already illegal.

Unless/until these cars they are ticketed, it's a joke.

How about calling Councilmember Paulie Vallone's office? He made lots of pledges during the campaign, but has been laying low since taking office.

Gee, instead of trying to figure out how NY's carbon footprint can be reduced so we have more people, the greens should be after this attack on - well green stuff.

Oh that is right, their funding would be cut by a process of cash exchange that starts with developers.

Should change the name to North Beijing or North Shanghai.

Should change the name to North Crap !
Flushing North is slowly becoming like Flushing south of Northern Blvd. It's just more expensive crap !

Dear Anonymous,
Please do not let a few inconsiderate homeowners change your opinion of North Flushing. There are many individuals and homeowner groups that work diligently to preserve our neighborhood for generations to come. It is up to everyone to bring these violations to the attention of our elected officials and city agencies, and work together to resolve the problems. Please take a walking tour of Broadway-Flushing in the spring - it is magnificent. I am confident that these violators will eventually be held accountable and our elected officials will assist us in correcting these problems. I am a proud homeowner in Broadway-Flushing - thank you.

This is atrocious but let's not trash a still beautiful neighborhood.

North Flushing is one of those rare pockets of green in Queens where people actually own land.

It is also for the most part filled with beautiful homes.

Why?? Because the homeowners work hard to keep it that way.

Hate to sound negative or racist but as long as off-the-boat undesirables keep tinging the neighborhood with their redecorating ideas, whilst the politicians keep turning a blind eye to this crap, eventually those who actually give a damn about the integrity of the neighborhood will head toward greener pastures, or simply die off. There is power in numbers, giving these occupants the upper hand.

Thanks for shining the light on these type of violations and attack on our communities and quality of life. Spread these photos like wildfire, Paul Vallone has been a non-existent councilman since he got elected. We need the laws changed, that's the DOB and these politicians in Queens. Northeast Queens has so many beautiful neighborhoods, houses and parks. I personally see it having much more potential as well, we need to start calling these bad homeowners, business owners out on their BS way of living. We need to keep up the fight and talk good about our neighborhoods in NE Queens start attracting and inviting people who will take interest in these areas and buy the beautiful homes here. There are beautiful old homes that need restoration or are just great the way they are and their are newer homes for more modern likes. If better quality people are introduced then more will follow. The crap will eventually get the idea that this doesn't fly in these well cared for and loved neighborhoods. A lot of revitalization has happened in other neighborhoods that were not even livable at one point, so why not here, why not already take some of these NE areas that need a little help but are still livable and let's give them a boost. I want to see more houses occupied and totally in demand by good families or just plain respectable homeowners. Also a lot of these neighborhoods in NE Queens are not even known to exist to lots of people looking for homes, for example talk to a lot of people from other boroughs or out of state, etc. and no one even knows about these areas. They don't know that beautiful pockets of residential homes and neighborhoods exist in Queens. Bonus is it is residential but still close proximity to so much! Let's not give up, let's spread the positivity and wake up and not let these people ruin our neighborhoods. Remember this can happen anywhere and neighborhoods are being attacked by parasites and elected officials everywhere.

I bet those cars belong to the realtors in that office.

Does anyone have the contact info for the real estate office? I would be happy to let them know that their parking is illegal.

I left them a message on their machine. Let's see if Best Try gives legal zoning and parking regulations their Best Try.

Man, i simply love what Asians are doing to our city!

Just curious - why the blind vitriol against Asians here? I see the exact same paved-over lawns with cars all around the driveway/sidewalks of Greek/Italian/etc. households of Bayside and Bay Terrace. I know the quality-of-life issues emanating from Flushing are significant, but the knee-jerk reactions here are a shame to see.

Duane Read (Rock Bottom) closed.
McDonalds closed.
Key food closed.
IHOP next to closed.
Where is the great walkable suburban North Flushing ? Where do people shop ? You only have the option of Marino's or getting in your car and leave North Flushing to shop then return to your ever fast changing neighborhood.

I've seen this in so many neighborhoods throughout the city, that I've come to think of it as perfectly normal. I suppose if people are upset by this, they can park their cars on the streets where this happens, blocking the offending cars in, and then leave it that way for a few days.

Keep on calling 311 and this stupid realty office. Let's hope gentrification makes it's way fast to downtown Flushing we need new energy and things need to change and I don't care how but for the better. Also pertaining to North Flushing hopefully it stays strongly residential. But in the meantime we need to act fast because south of North Flushing which is Murray Hill and close to downtown Flushing needs a savior. We need to do something to save those beautiful older homes and architecture there. The best thing of course would be to have the zoning changed it is currently R3-X. I can't bare to see one more of those beautiful potential filled homes knocked down for some cheaply, obscure Asian architecture crap. It doesn't have to be like that. Asians are living in these homes now but these Asians contractors, developers and real estates are after these 1/2 family beautiful residential homes there. I'm a positive thinker not some smart ass commentator on here like many others and I believe that this area I am talking about should be saved and rallied for before it is too late.

To the point of "blocking in their cars" .. it would be a great idea except that most of the roadways have alternate side parking and the car doing the blocking would get a ticket... also, there is usually some area where that car can access the street from the sidewalk whether it be another driveway, an open parking space, or the pedestrian ramp ... but good idea anyway