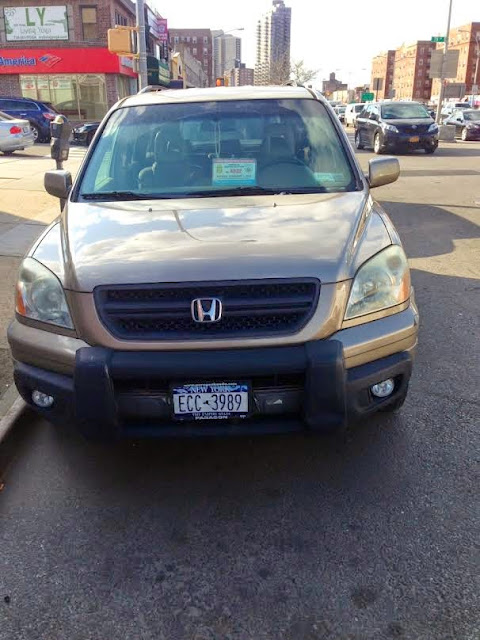 I work near Borough Hall, where the surrounding parking spots are often occupied by vehicles bearing placards. You can imagine how many of them are fake, coming from nonexistent agencies and from unions representing various kinds of officers that have no authority to avoid paying for parking.

As a taxpaying citizen, I get parking tickets all the time, but these entitled space hogs get a free ride. Well today I decided to do something. Upon discovering that the Honda on Queens Boulevard and 78th Avenue has a useless placard from the Federal Police Officers Association but no parking receipt for the spot, I decided to take an old orange envelope and write my own prank ticket. 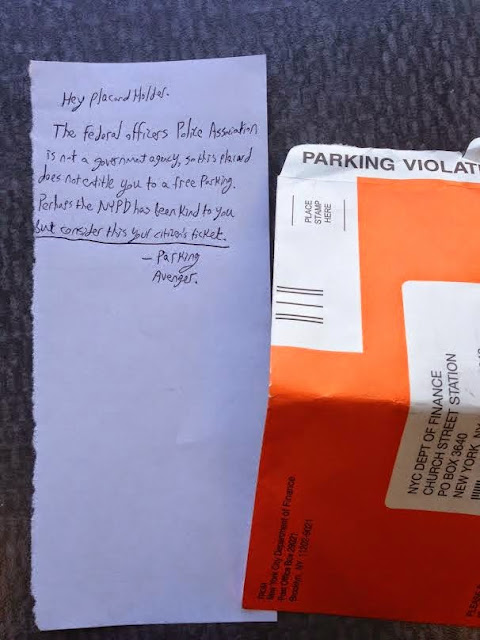 Perhaps my action will inspire more citizens to write their own tickets as well. As civilians, we cannot levy financial penalties not vandalize other people's vehicles. The best we can do is issue a warning and shame them on Queens Crap. Let's hope my idea catches on. 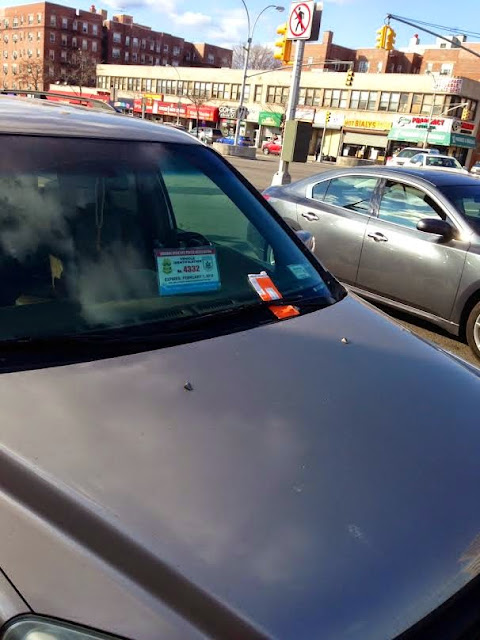 Ooooh, I'm picturing a cartoon superhero!
Posted by Queens Crapper at 12:45 AM

Good catch. The traffic enforcement agents are too dumb to pick up on this game. Or are they even trained to spot this illegal practice?

It's just leaving a note on the windshield....

It's only a joke to the phony placard user until the city tows his car away.

Oooh! Hot Bialys in the background! I love that place!

Just a word on the "fake association" -http://www.us-fopa.com/
Trust me, I don't believe that any person or agency should get placards but this IS one of the listed associations that have placards (along with over 800 others)

No one is saying the association is "fake," but where is the regulation that entitles it to have parking placards? Even retired officers have to give it up.

The fact that the "Federal Officers Police Association" has a web site, doesn't grant them "park anywhere in NYC" privileges.

In any case, they don't seem to have an existence beyond a place to send your money in and get their logo merchandise. So I'm calling BS on that.

There are no "entitled" parking spaces in NYC. Teachers lost those rights years ago when the Title III regulations were changed... but look at every school and you'll see those placards. Even when they were authorized placards, they were only issued to a maximum of 3 teachers per school, and the city allowed three spaces per school. Now the entire surrounding area of schools are filled with teachers, office workers, custodians, and anyone else who gets a placard

"Now the entire surrounding area of schools are filled with teachers, office workers, custodians, and anyone else who gets a placard"

I know several dozen teachers in this city, and never met one with a parking placard. Either there is some mass conspiracy to keep the rest of us in the dark, or you're just slinging mud.

Don't peg the entitlements of some worthless DOE officials making a site visit on the teachers themselves.

I have also seen lots of placarded vehicles around schools. I have no idea who they are or what they do but why should anyone have a permit to park where they work

Hello;
Without revealing too much about my position, I handle a lot of authorized/permit parking for the city. I receive 100's, if not more, of requests from school workers (teachers/custodians/etc) requesting to "renew their permits" .I try to explain that we don't issue permits for school parking and EVERY one of them says "BS, most of my school has one and I had one until this year ... just tell me where to reapply" ..trust me, this happens DAILY at the beginning of each school year.
I'm not even getting into NYPD/FDNY/NYSJ/NYP personnel asking for permits. My office technically deals with only handicapped placards but I spend most of my day explaining/denying all others. A lot of these placards are printed at home or by some fraudulent company but there is nobody who would be able to tell the difference except that NYC does not authorize faculty parking by permits

I know of some DOE personnel working in crowded areas, Corona in particular, who leave at 3 a.m. and 4 a.m. from LI to get a spot close to the school. They do would not even think of creating a "fake" placard as so many of these hoodlums have. Believe it or not, there are still some honest hard working people.

Good morning;
I never said EVERY teacher/schoolworker has or even wants a permit but as you must be quite aware, enough of them do ask/create a parking placard and that is a major issue around schools. While I totally agree that all of this privilege parking is atrocious, parking around a school illegally where school kids have to enter the roadway to gain access to their buses is a serious offense that has happened for years and shows no signs of letting up ... and, as you referred to as hoodlums, are fellow teachers... maybe your friedns should confront them, but I know that the answer is always "I don't know who they are" which is BS, there are plenty of them and they can be found easily by just waiting by the car while exiting schools. The NYPD does not enforce most of these regulations because the placards are used mostly in zones that are signed as "faculty vehicles / dept of education" which is another flaw in the entire parking system

I'll bet that the second ticket was purposely written poorly (no cross street or address) so it can be easily dismissed.