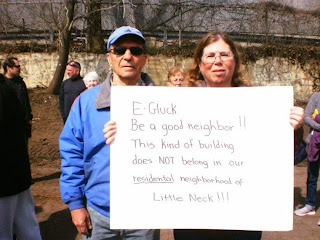 The wall is up, the people are angry, and, according to state Sen. Tony Avella, “a stop work [order] is going into effect.”

At the center of the controversy is the construction of a new 35-foot-high building, which would sit atop a hill that is already approximately 10 feet above curb level, in the middle of a tree-lined residential neighborhood in Little Neck.

Nearly 100 area residents, along with Avella, Assemblyman Ed Braunstein (D-Bayside) and Councilman Mark Weprin (D-Oakland Gardens) and representatives of Community Board 11, gathered at the corner of 262nd Street and 60th Road on Tuesday morning to protest the construction.

“The moment I saw this, looking at the wall, I felt I was back in the concentration camp,” said a woman who identified herself only as Margret, a Holocaust survivor who lives on the corner across the street from the site. “It is very depressing. I sit at my table and I have to look at this wall.”

The wall, from most accounts, seemed to have been erected overnight.
Posted by Queens Crapper at 12:01 AM

“The moment I saw this, looking at the wall, I felt I was back in the concentration camp,” said a woman who identified herself only as Margret, a Holocaust survivor..."

There are still "Holocaust" survivors alive?

What was was so wrong with the old building and landscaping to even get a demo permit and variance to built this huge eastern block shitter ?

Dam between the Asians and developers Little Neck is really being shit on, trees, cute 1 family houses, cobble stone streets almost all gone. I get sicker every time I walk up from the LIRR station to visit the 70s Company Tavern with Nixon on the wall. I bet that will be gone soon also.

Yes, several Holocaust survivors alive Great Neck, Little Neck, Alberson. Gene Simmons mother is one of them. You dont hear of them because they refuse to Quote Genes mom: "open that door of the past and go crazy" by talking about it to anyone.
I also seen lots of older Iranian dudes with prison camp tattoos at these HUGE July 4th party's they trow. The older dudes are cool. It the ones born here that appear to be the spoiled brat assholes.

"I cannot use [the word 'Holocaust'] anymore. First, because there are no words, and also because it has become so trivialized that I cannot use it anymore. Whatever mishap occurs now, they call it 'holocaust'. I have seen it myself in television in the country in which I live. A commentator describing the defeat of a sports team, somewhere, called it a 'holocaust'. I have read in a very prestigious newspaper published in California, a description of the murder of six people, and the author called it a holocaust. So, I have no words anymore." - Elie Wiesel (Holocaust trivialization.)

this is an gentrification attack on the elderly,because this type of development can only be achieved against the most vulnerable.

though to these financiers,developers and creators of "change" and "progress",vulnerable equals expendable.

Many survivors were children when they were taken to the camps, thus would be about 78-88 today.

George the Atheist needs to do some math. Nobody born in 1935 is still alive?

Which proves what, George?

My math skills are excellent. You missed my point about Holocaust survivors vs. "Holocaust" survivors.

What do WWII concentration camps have to do with a real estate issue in Queens?

Margret [the lady quoted in the article]: why not see that structure as representing the Wailing Wall in Jerusalem?

What is the building for ?
Is it on the old Leviton site ?
I thought a watch company bought the site and everyone was on board with the sale.

The land should have been used to build single family homes that would have fit the character of the neighborhood. Not a wall that towers over the single story cape houses.
I would move before living next to that mess.


"What do WWII concentration camps have to do with a real estate issue in Queens?"

Does this person spaz out every time they see a wall being built? If so I have one thing I want to say to this person: go move to the woods upstate. No one is not going to build a wall on their property just because of mental associations in your head and nowhere else.

I bought an apartment (co-op) a block away from an empty lot (it was an underused parking lot) Now it is becoming a 26 story building.

I KNEW when i bought 12 years ago, the lot was not going to be a parking lot for ever. The building is coming sooner than i would like, but hey, i had a dozen years.
The people who bought houses next to the commercial building(Leviton factory) could reasonable expect, at some point, they factory would get bigger, (or be sold to some one else who would do something newer (and bigger).

Their house were cheaper (i know, I lived in Little Neck from 1978 till 2002)--I didn't buy next to the Leviton factory for just that reason. I bought further away, (an wreck! and spend $$$ fixing it up)

These folks bought next to a mixes use lot (could be commercial/could be residential) and one that was zoned for multi story building. They got their bargain, and now, want to change the rules. I have no sympathy for them. (and expect none for my self...) I still will have a good (but not a great ) view. I got my bargain, and enjoyed my view while it lasted. All good things come to an end.

Why no picture of the wall????

Pictures and the story here in the Daily News.

Thank you. I missed that article.

A bit surprised that Margeret used a holocaust reference. Mr. Gluck is also a survivor and a great donor towards holocaust education programs including one held earlier this evening in Forest Hills.

These people got really screwed. They are only taking 15 or so part time from the neighborhood.
The following 343 are transferred from the old factory.

Seems nobody saw or read the fine-print jeez what a friggan joke JOBS FOR LITTLE NECK MY ASS !!!
Link:
http://www.goodjobsny.org/sites/default/files/docs/e._gluck_corporation_php.pdf

Its all on file dated Sept 12 2003
"Height 35 feet"
I guess somebody was asleep at the wheel or deliberately kept these people in the dark to keep construction moving forward.

Apparently somebody lied scroll down to page 15 line 14 on the PDF.

Were those scenic views KNOWN to be important to the community? Otherwise you've got nothing on that point.

Was 100% of the site already roads, buildings, and other paved surfaces? Not one bit of dirt, grass, vegetation etc..? Looks like there are quite a few trees and some grass there in sat view. Are they getting ripped out? How will that effect local drainage?

I realize this property is zoned commercial but this commercial property happens to be a part of a lovely residential neighborhood. There are ranch style homes and garden apartments. This needs to be kept
to one story. Please preserve and respect the integrity of this neighborhood. Do not allow this construction to continue. Revise plans ASAP!!!!!