Last week, 2 meeting sessions were held that were meant to settle the controversy surrounding the North Brooklyn Boat Club's attempt to stealthily move its proposed permanent location from the Greenpoint Manufacturing and Design Center to a yet-to-be built hotel owned by the Argentos.

Unfortunately, the meetings raised more questions than they answered.

Adam Perlmutter, speaking on the behalf of the NBBC, noted that the boat club/"education center" could not be located at the GMDC because the GMDC lacked a Certificate of Occupancy. He really harped on this point. If this is the case then:

Why was a proposal (to be voted upon) filed in the first place for the GMDC location?
Why move to the new location, 51 Ash Street, which does not have a valid C of O?

A land use attorney - incidentally, one behind the Williamsburg-Greenpoint Rezoning of 2005 - knows full well that a new C of O is obtained upon change of use of the building, so it's uncertain what the purpose of this explanation was.


Nonprofit City Parks Foundation, which, to put things as simply as possible, is actually responsible for getting the boathouse built, paid one architect until the project's lack of progress rendered that firm unavailable. Then funds were spent hiring a second architect. Madonna Architects received $3,000, and Ed Weinstein Architects received $36,444.13.

City Parks Foundation was charged with determining the feasibility of the projects before, during and after the vote. If an agreement to locate the boathouse at the GMDC was not made prior to the vote, then why was it even on the ballot and put in first place? Quite a few other projects were jettisoned by City Parks Foundation due to lack of feasibility before the vote, but not this one. Why is that?


The club is currently operating out of a temporary location at 51 Ash Street. That site is owned by Broadway Stages, and negotiations are now underway to build the boathouse at that location instead of the Manhattan Avenue one. There are renderings, but due to ongoing negotiations, Thompson said the NBBC cannot share them at this time.

So we're how many years past the vote and we're still negotiating a new location? This seems pretty asinine, especially for a project that came in 3rd place in the voting.


...meanwhile, a revised budget for the 51 Ash Street site has not yet been released.

And why is that? City Parks Foundation was required to report back to the DEC with a revised budget at regular intervals, so this sounds rather lame. The GMDC plan would have been a much larger undertaking, so the new revised cost should be much less - freeing up money for other projects on the list. Is this dilly-dallying fair to the rest of the stakeholders?


As for New York Shitty's assertion that boathouse funds are being used for a "transient hotel," Thompson said that landlord Broadway Stages is working on its own separate commercial plans for the site, but hasn't announced what their function (or functions) will be.

Actually, Gina Argento quite clearly stated to the Daily News that she was building a hotel at that location (and expected to split the cost of construction with the boathouse). Perhaps the NBBC is still in negotiations with the Argentos because it was revealed to Gina that she won't be seeing any of that money?

Now here's where it gets really interesting. From the The Greenpoint Gazette:


Brian Coleman, the CEO of GMDC said his organization was unceremoniously dumped from the process involving the boathouse’s construction.

“How is this project in any way benefitting the community in its new location?” he asked at the meeting. “Why have we yet to receive any formal notice regarding our participation in the project?”

As the process dragged on, the Boat Club temporarily relocated to 51 Ash Street, a property owned by Broadway Stages, which is offering the space rent-free to the Boat Club.

Coleman said he was never informed of the change and that his organization was never formally asked to step away from the project. In addition, he argued that the Ash Street location would not offer as much open space to the project as the location on Manhattan Avenue.


Coleman wanted too much money for the waterfront plot, which floods, and worried the building lacked the proper permits to house the education programs the paddlers want to conduct, according to club founder and harbor master Dewey Thompson.

See point above about getting a new C of O, and as for asking for too much money, when you advocate for the massive upzoning of your neighborhood, that's generally what happens. GWAPP, sponsors of the boathouse, supported this rezoning.


The proposal that the community actually voted on was one that would provide repair of the large bulkhead at GMDC which would allow public access to the Creek, an esplanade/park on the waterfront, an environmental center/boathouse and educational programs run by the boathouse out of an historical building.

What they will instead be getting is: no public esplanade/park on the waterfront, no repair of the large bulkhead at the GMDC, but repair of a much smaller one at the new location and an environmental center/boathouse IF and WHEN the Argentos build their "transient" hotel. And how funny is it that so-called "environmental groups" are coalescing around the Argentos, considering their unauthorized actions in the waste trade business?

It sounds like a bait-and-switch, with the focal point being a free boathouse for these folks, in return for them providing only a fraction of what was promised. What's worse is when the CPF and DEC come out with statements like the following:


The mariners contended that Greenpoint Manufacturing was only on the forms as a possible landlord, not a partner, and a state spokeswoman agreed, saying at the hearing that the club had the right to look elsewhere for boat-housing when negotiations collapsed.

"They have the right to look for a new location for the boathouse" is basically letting the public know that this is all this vote was ever about. Let me remind you about the conflicts of interest that abound here. Some in attendance stated that it seemed that the NBBC simply wanted a boathouse and didn't care where it was built, so long as they could find someone to pay for it. And all else involved went along happily.


Thompson said he hopes the boathouse will be open by 2016.

And back when the vote was taken, we all expected the boathouse to be open by now... Instead we got this: 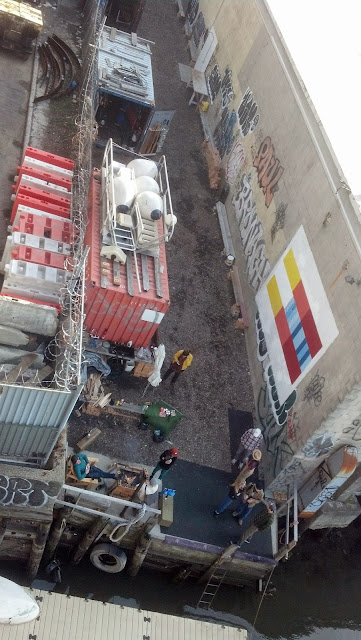 Who appointed that asshole Harbor Master ? Where are his coast guard certificates and assorted navigation credentials.
On second thought WHAT FRIGGAN HARBOR ?

Those so called artists renderings are bogus. The club members are freeloaders and don't know what real work is. Closer scrutiny is needed on this.

Thanks crappy for the info. and keeping on top of this

The axis of hipster must be destroyed-this boathouse,knockdown center,and the occupation of williamsburgh and greenpoint.

This isn't like the mafia and their social clubs,unless these pussies are armed.Get a congregation going and throw their asses out.from those photos it looks like you can do a nice egg bombardment from there.