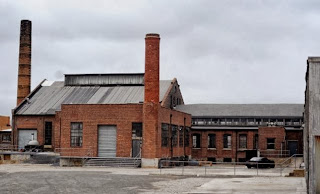 
Tyler Myers, the manager of the Knockdown Center, said he was surprised by the response, saying the facility has been a good neighbor.

He said the center has had temporary city authorization for all its previous events, which range from a Tiki Disco party to an architecture and music collaboration called SoundCorridors.

"We have had permits for anything we have done,” he said.

Really. And how long can you keep applying for temporary permits for the same space? You've been there more than a year thus far and have hosted more than a handful of events.  And what is the space used for the rest of the time?  Artist studios for which there is no C of O?


“We want to be in a place where we can do a variety of different things — weddings, community high school reunions and civic association meetings. We have a spectacular and gorgeous building that can function in the community well.”

There may be some twisted hipster brides who want to get married there, but high school reunions generally happen at the schools themselves or at restaurant-style catering halls and there isn't any civic association that I know of that would be interested in holding meetings there. Nice try, though! Why not mention the noise parties you are famous for?


("They handed out ear plugs at the entrance so that Maspeth, Queens wouldn’t become ground zero of a city-wide tinnitus epidemic. - Fader"

“It sounded like machines with their gauges buried in the red were fixing to blow the roof off. Each of the acts were punishingly loud. The sounds from each space bled together to create an intense soundscape. Erik was with me and passed on using ear plugs. I'm guessing he spent a good portion of today asking people to repeat themselves. I've seen a lot of shows this year. This was by far the loudest.” - Quooklynite)

There's no soundproofing at this facility and most of it is outdoors anyway, yet you schedule events like this and claim to want to be a "good neighbor".  Okay.

Now back to the Daily News:


City Councilwoman Elizabeth Crowley (D-Middle Village), whose district includes other portions of Maspeth, has been the business’s lone champion, saying it will bring much-needed jobs to the community.

“It seems like a good way to revitalize the factory,” said Crowley, who added one of the investors — Gina Argento — also owns Broadway Stages, which employs more than 1,500 people at its Brooklyn site.

“Those are good union jobs,” Crowley said about Broadway Stages. “I have known the owners for a long time. They also do good philanthropic work.”

Broadway Stages may have 1,500 "good union jobs" but the 30 jobs that will allegedly be created in Maspeth certainly won't be union. Unless you count membership in the Freelancers Union as "union jobs". I can't even believe she went there. And this venue's main caterer is Roberta's, who got caught being not so nice to its workers.

And...what philanthropic work?  Owning a business or donating to politicians? 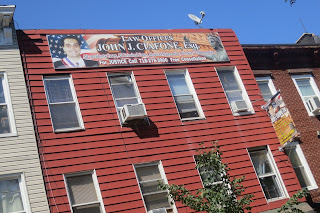 Do you folks know to whom Gina Argento, co-owner of Broadway Stages, is married?  None other than John Ciafone, a failed Democratic Astoria City Council candidate, who is listed as the CEO of Broadway Stages in Ms. Crowley's campaign filings and, as you may recall, has plastered Greenpoint, Williamsburg, Astoria and LIC with banners for his services on residential buildings for which there are no permits.  He's also on Bll DeBlasio's slumlord watchlist:

The de Blasio campaign returned Ciafone’s money but kept another $11,300 raised by relatives and employees. The building his now down to two code violations and has been removed from the list.

(To top it all off, the couple actually lives in Whitestone.)

Again, I ask: Why should people who refuse to follow basic rules and laws be trusted with a liquor license?

Miss Heather has a better solution:


So why not make this another film facility instead? This would certainly be better than the thirty jobs the Knockdown Center claims it will create if given a liquor license. But there I go using “logic” again…

Yes, please stop doing that. Something like an expansion of Broadway Stages would be welcomed, actually provide real jobs to people who live nearby and, get this - conform with the zoning for this location. But it's more fun to shuttle in thousands of people from other neighborhoods to booze parties and call it an "arts center". What do they care? None of them live there.
Posted by Queens Crapper at 12:16 AM

Another couple of fine upstanding Whitestone citizens. At least their not crapping in their own back yard this time, like the Vallone interests in the contaminated land fill site. Not that that would stop them, as it wont stop the Vallone family!

Where is the press?

Where are our electeds?

Where it the community boards?

where does Miss Heather perform?

This guy Ciafone is real bad news. Slumlord x 1000. He sues his rent controlled tenants all the time.

I think it would make an awesome meth lab.