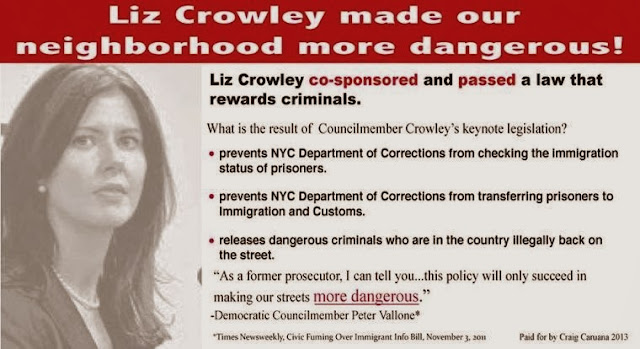 The good-government group Citizens Union canceled its planned endorsement of a Republican challenger in a little-watched City Council race after two Democratic lawmakers complained about his campaign literature, its executive director confirmed.

Citizens Union announced Friday morning that it would not support anyone in the Queens race between incumbent Democratic Councilwoman Elizabeth Crowley and a young Republican former television producer, Craig Caruana. The organization had told Mr. Caruana it would endorse him this week. Ms. Crowley, a cousin of powerful Queens Democratic leader Joe Crowley, is heavily favored to win re-election.

In an email to reporters, the good-government group explained that it had backed away from supporting Mr. Caruana upon learning this week of literature mailed to voters by his campaign.

"After the Citizens Union board met yesterday and reviewed the message of the flyer and its consequences, it felt the flyer crossed a line and engaged in inappropriate fear-mongering that unfairly targets immigrants," the group explained.

Not mentioned was that two members of the City Council had called Citizens Union Executive Director Dick Dadey this week to complain about the impending endorsement. Manhattan Councilwoman Melissa Mark-Viverito, the co-chair of the council's Progressive Caucus and a candidate for council speaker, brought the matter to Mr. Dadey's attention, he said. Councilman Danny Dromm, a Queens Democrat, also called to register his concern.

An actual quote from their director: “Citizens Union has been pleased to work over the past couple of years with reform-minded individuals like Mayor Bloomberg and Speaker Christine Quinn.”

And it's quite interesting that a mailer about a piece of legislation that Citizens Union decided not to take a position on was a dealbreaker for Caruana, yet the many mailers from the real estate PAC, Jobs for New York, on behalf of CD19 candidate Paul Vallone, didn't cause them to bat en eyelash when deciding to endorse Vallone in that race. Outside spending in elections is usually a top 5 concern for good government groups, but for CU, it's of no concern.

At the end of the day, I'm not sure Caruana would have wanted to be on the same endorsement list as Paul Vallone and Melinda Katz, anyway.
Posted by Queens Crapper at 12:34 AM

To Democrats, it's no difference. They favor open borders. If you want to be an American, just cross the border and poof, you're American.

The illegals need to be deported! That's all...plain and simple! Just because I live in nyc, does not mean that I support illegal immigration! I was born and raised here!! My parents were born and raised here! Nyc is too overcrowded as it is, if we deported the 1.5 million illegals, we would have so many apartments available to us citizens!

^ Yeah, good luck with that.

I'm watching America melt and it's gratifying. Lincoln predicted our country would only fall under it's own weight not foreign power, but even he could not imagine this scene! We are allowing our corrupt governments to simply give it away.

You want to curb illegal immigration?

Tell those Great American local businessmen to stop hiring them.

The guy who owns the local diner, the landscaper, the home remodeler and all the other low-skilled and low-pay job "providers".

YOU pay the price for these poor, uninsured workers.

For the record, Citizen's Union had called our campaign office to say that they would not be endorsing Mr Arcabascio for Queens Borough President but rather Ms Katz. If we understand the charter of Citizen's Union correctly, should they not have run from Ms Katz as quickly as possible based on her vote to extend term limits during her tenure in the City Council? Was that not a complete defiance of the will of the people? A twice voted upon referendum where the people spoke quite loud and quite clear that they did not want term limits extended was disregarded by Ms Katz because, as per her answer on the NY1 debate last Thursday, "it goes against MY core belief of limit terms, 8 years is not enough time to get things done". So based on that comment are we all to assume the IF elected she will not accomplish anything during her tenure because 8 years just isn't enough time? Shame on Citizen's Union for endorsing someone that blatantly turned her back on the people to advance her own agenda and career.

It was a cowardly and shameless act that Citizen's Union did to withdraw their endorsement of Craig Caruana. Mr Caruana is a bright young beacon of hope for his community and will represent the people the way they deserve with integrity, honor and in their best interest. He will not be swayed by people trying to disrupt and damage the continuity of the community as Ms Crowley has proven by her silence to stop the Knockdown Center. Her contributors have dictated her actions and not the people of the community. Shame on her and all the elected officials that put money before their communities.

Mr Caruana, we applaud you for your hard work in the community and we look for your win on November 5th. As for Citizen's Union, you should just change your name to the Democratic Party Rubber Stamp Organization. You are certainly not an organization for the people!

Citizens Union appears to be another immoral and corrupt organization out to fleece the citizens of NYC. Katz showed her disregard for us by supporting third term, even after New Yorkers by direct vote(referendum)rejected it. Listening New Yorkers?