So Miss Heather decided to cross the Creek this week and attend a CB5 committee meeting. The Knockdown Center happened to be under discussion. What a hoot!

Concerns about this facility being a nightclub are raised by the chair.

“We will not be a club”, Tyler Myers says. Then he sees fit to enlighten his audience as to what an “arts center” is. As defined by Wikipedia:


“art centre or arts center is distinct from an art gallery or art museum. An arts centre is a functional community centre with a specific remit to encourage arts practice and to provide facilities such as theatre space, gallery space, venues for musical performance, workshop areas, educational facilities, technical equipment, etc.[1]

In the United States, “art centers” are generally either establishments geared toward exposing, generating, and making accessible art making to arts-interested individuals, or buildings that rent primarily to artists, galleries, or companies involved in art making.

I want to thank Mr. Myers for informing me, an artist, third generation, as to what an artists’ center is. I clearly have missed out on many a dance party.

Per Mr. Myers, a liquor license is normal for an “arts center” then he cites MOMA, The “Met”, Lincoln Center, etc., as examples. Um, the last I checked all of these are in Manhattan.

Now we’re back to sustaining and maintaining this beautiful building. E.g.; if you do not let us have this, we’ll throw our toys out of the pram and tear it down.

Parking lots are discussed. Rather good to know since this is not located anywhere near mass transit.

Transportation is covered! They have a magical blue bus with California plates which transports the hipsters to and fro: 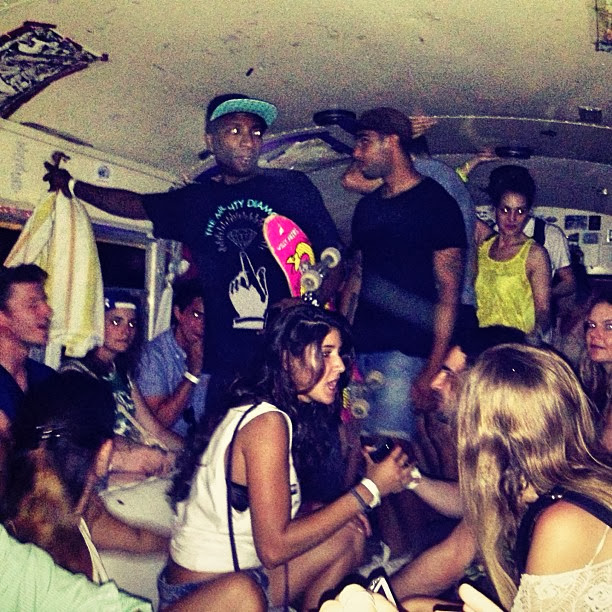 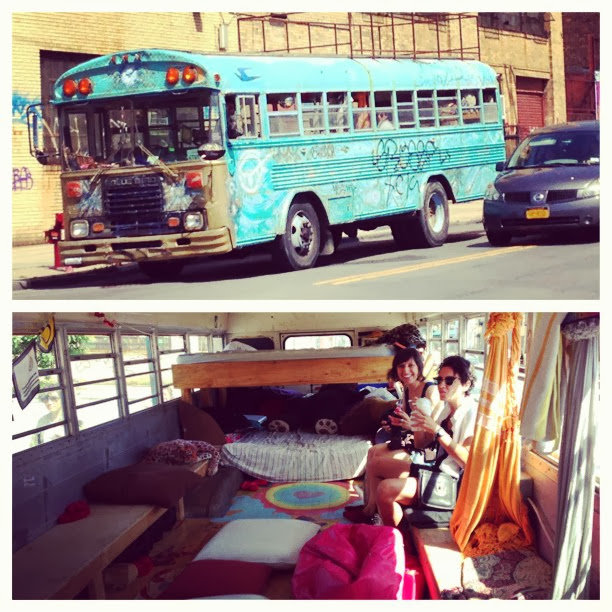 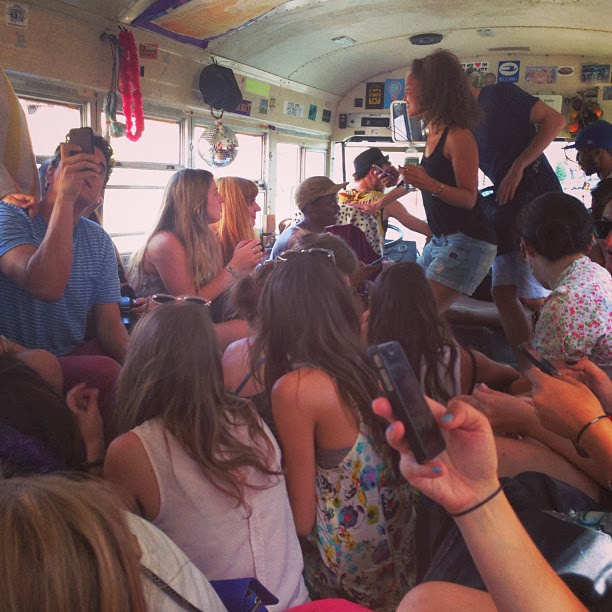 Perhaps the Argentos, investors in this endeavor— and my community— would be so kind to explain about how the following will (further) uplift the Maspeth community? 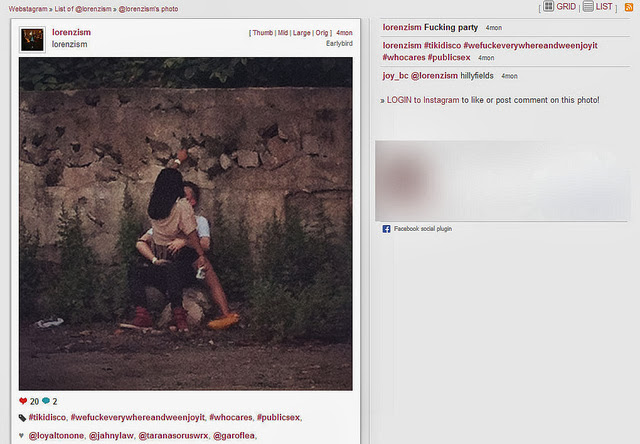 Can’t honestly say I have ever seen this at MOMA… 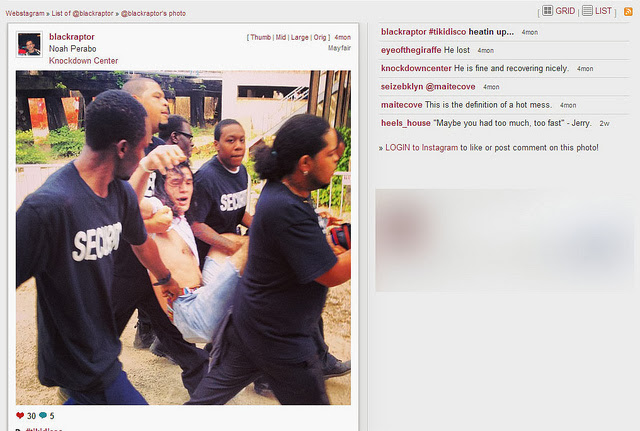 or this at Lincoln Center, for that matter. Perhaps I am going at the wrong time? 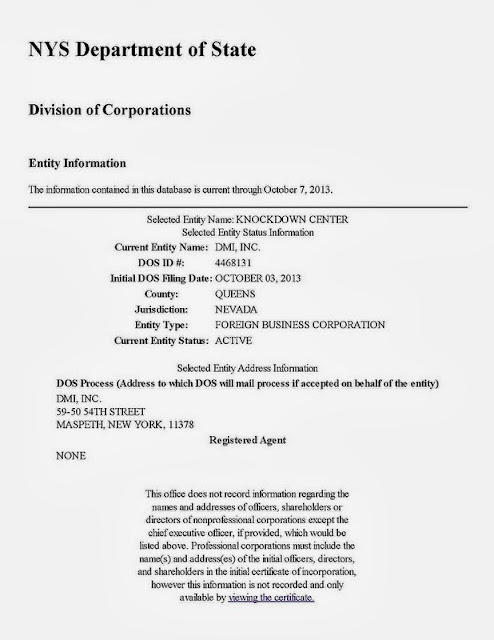 A foreign business corporation based in Nevada? HUH?

All these factors culminated in this at the full board meeting this past Wednesday:


Followed by a unanimous rejection by the board, which cited the fact that the owner has no business applying for a liquor license when he doesn't have a valid Certificate of Occupancy.

Everyone, and I mean EVERYONE is opposed to this nightmare except those with a vested interest in it and Miss Dizzy Lizzy Crowley, who thinks it's worth it to allow the community to be trashed in return for 30 jobs which may or may not be created. The Forum is on it:

In relation to the Knockdown Center itself, Crowley, speaking at a recent Community Board 5 meeting, called the business is an “innovative” place that could give the area’s economy a boost.

She also noted during the meeting that one of the investors in Knockdown, Gina Argento, owns Broadway Stages – a company that employs about 1,500 people at its spot in Brooklyn. Gina Argento has also supported Crowley, donating $2,500 to the councilwoman in March 2013, and another $2,000 in 2011. Her brother, Anthony Argento, also a founder of Broadway Stages, donated $2,000 to Crowley in 2011 as well.

Fun times!
Posted by Queens Crapper at 12:58 AM

These asswipes think Queens residents are too brutish to understand what an "arts center" is? Do they think insulting people is going to get them what they want?

Next time I go to the Met, I'll ask for some glowsticks.

I don't get this young generation. Here they are all together on a bus with each other and they all have their phone outs texting or doing anything except socializing with each other.

PS: It is not just young kids either. All the way for people to connect yet they are all so disconnected.

And this stupid b!tch ran UNOPPOSED in the democrat primary.

And this after she went against her party dictate to not run in the congressional primary last year.

I guess her cousin Virginny Joe Crowley who controls the democrat party in Queens really didn't mean it when he advised her not to run.
He probably wanted her to beat an Asian woman. After all those pesky Asians are gaining political power and might shuffle him out of his cushy job in DC and his comfy Virginia home far away from the NY district he supposedly represents in the House of representatives.

These asswipes think Queens residents are too brutish to understand what an "arts center" is?

You keep electing them and usually from the same party!

Remember that WikiPedia is written by users, and "Arts Centers" definition can be pretty much written by anyone. Gina Argento is the owner of a property at 251 e. Houston St. Also Isn't P.S. 1 In L.I.C.?

Ah yes. However LIC thinks it is Manhattan nowadays. In any event, it's not around here.

This is not an arts center. As much as I would like one to be near by or in Maspeth this place is obviously just a rave center and the owners are there only to cash in on those priced out of nearby Brooklyn.
Also PS1 is in Queens . Not sure who said it was in Manhattan.

It was an error that has been corrected.

Elizabeth Crowley's own sister and brother in law voted against the liquor license.

Party on dudes! You keep speaking truth to power!

Don't let these old fuddy duddies with their silly laws get in the way of the important work you're doing down there. They're probably all 1 percenters!

Where can I catch the blue bus, man?

"This is not an arts center."

True. But it will be.

The owner of this 3 acre site/warehouse is the woman who owns Broadway Stages and several other warehouse properties in Greenpoint.

We all know that the Williamsburg hipsters are moveing into Greenpoint and Argento being an astute business woman is seeing the worth of her properties escalate.

Seems to me she is accumulating other properties up the Grand Street/Metropolitan Ave. corridor for her Stage business and this Knockdown site is one of them.

Argento will develop her Brooklyn properties for a fortune and move the stage business into the rundown Maspeth/Bohack Square area. This Knockdown place is priming the pump for future expansion.

Argento is an investor, not the owner. She could have just bought the property if that was her plan.

There's a reason why they call her "Dizzy Lizzy." Please people, vote her out this time. Vote for Craig Caruana. Let's give a new-comer a chance.

Hell, if this was happening in Jamaica, I don't even think there would have been a meeting. Just set up shop and nobody would turn a head here in the Wild Wild West. Shit, if a smashed up car can sit for 11 days on a public street leaking fluids and sticking partway into the street in sight of the 103rd precinct, this would be a piece of cake doing. If a commercial truck with no license plate can sit in an empty vacant lot in between a house and an apartment building for half year..........yeah this shit would have no problem.

Elizabeth Crowley is an airhead. Vote her out on November 5th. We can't take 4 more years of this idiot.

This is what America really is and how the rest of the world sees it. We'll be right over to straighten out their problems. Right!