Landmarking advocates strike back against REBNY 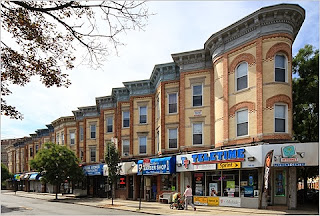 A coalition of preservation groups from around the city gathered outside the landmarked midtown headquarters of the Real Estate Board of New York Monday to push back against a recent report from the powerful property-industry lobbying group that linked landmarking to a dearth in new affordable housing.

"This is a red herring," Andrew Berman, of the Greenwich Village Society for Historic Preservation, said of the report. "This is not why New York is faces challenges to affordability."

Speaking outside of the old, art-deco General Electric tower on the corner of Lexington Avenue and East 52nd Street, Mr. Berman was referring to REBNY's Sept. 25 study on the impact of landmarking, which lambasted what it termed the overzealous activity of the city's Landmarks Preservation Commission in expanding building protections in the city. As a consequence, REBNY said that only five units of affordable housing had been constructed in Manhattan's landmarked districts since 2003, and that none had been built since 2008. Meanwhile, 8,070 units of such lower-priced housing went up elsewhere in the borough over the same five-year period, the report concluded.

But on Monday, the preservationists fired back. They charged that some REBNY members simply wanted to tear down historic buildings that house low- and middle-income individuals and put up luxury towers instead.

"The biggest cause of New York's affordability (problem) is the loss of existing affordable units," Mr. Berman said, going to far as to insist that landmark designations are often the only thing standing in the way of the units' destruction.

As examples he cited landmarked buildings that are entirely composed of affordable units, including West Beth and 505 LaGuardia Place in the West Village and Dunbar Apartments in Harlem as examples of developments that would have been at risk should they not have been landmarked.

Remember that REBNY sponsors the political action committee, Jobs For New York.
Posted by Queens Crapper at 12:02 AM

Where is the building in this picture?

I'm glad people and organizations took a stand together and spoke against REBNY and their false claims. Hopefully this will awaken people even if it's one more person. REBNY wants to destroy landmarks and discourage new landmarking.

I stand with the preservationists. I doubt REBNY and Berman are all that concerned about NY City's working poor!

When 90% of the city has no chance of receiving protection, when we are the pawns to our politician's whims rather than the merits of a program, and when I pay taxes to support something that will never benefit me but mostly benefits the rich and well connected, and when I AM RED LINED BY THE PRESERVATION COMMUNITY THAT DIRECTLY BENEFITS FROM MY SECOND CLASS STATUS BY GIVING ME NO HELP IN PRESERVING MY COMMUNITY (besides telling me, with a smirk on their face, to start with my councilman) I DO NOT GIVE TWO SHITS ABOUT LANDMARKING AND HOPE THAT THE REBNY RETOOLS THEIR BATTLE ALONG THESE LINES AND WINS IN OVERTURNING THE LAW.

Then you'll be very happy when guys like REBNY tear the guts out of your neighborhood without a second thought to its history and character, right? You want more Williamsburgs?

How about some new rules on signage?

Just spent the day in Williamsburg today. I do enjoy the old vibe streets and buildings. But what a mess they have made out of this area. Gross buildings that look like cheap hotels and are out of character. I saw one building, the bottom looked like on old factory brick storefront while the top of it which is still being built looks like a cheap modern stucco box. Not to mention the glass horror buildings by the waterfront that the Bloomberg administration allowed and overruled what the community wanted. Thanks again Bloomberg!

Then you'll be very happy when guys like REBNY tear the guts out of your neighborhood without a second thought to its history and character, right? You want more Williamsburgs?

Only then can we rewrite the law so that everyone is protected equally and we are not some serf under an ignorant arrogant councilman.

As as for what is happening in Greenpoint, do not blame Bloomberg. This is the result of the local officials bowing down to what Bloomberg wants instead of fighting for their community.

REBNY is like the Hydra. it has many heads. Cut one off and another grows. Jobs For New York is definitely one of their most vicious heads. it masquerades as a pro group labor but it is responsible for displacing the laboring work force when all is over.

Wise up folks! WISE UP QUEENS. learn to vote for officials who really have your neighborhoods' interests in mind. DO NOT continue to employ members of political dynasties like the Vallones. These kind of political mobsters enrich themselves at YOUR expense.

Now back to Queens' plight!
Queens has pretty much been snubbed by the LPC anyway. Where's OUR protection? This is the wild west for developers.

To make things worse, many of the historical societies that proliferate in our borough, are weak kneed groups dependent on borough hall's existence. Dare they get up on their hind legs and bark?

Not if they want a bone for supper!

As long as sloths like Bob Tierney and Mary Beth Betts remain at the LPC, taking their orders from Bloomberg, Queens will soon become a wasteland--whose history will only survive to be read about in books.

Uh,
Greenpoint has been also sold out by the Slavic "mafia".

It's time to investigate some of these wealthy Russkies and Pols who are developing the hell out of this nabe.

The higher density zoning that exists in some of these neighborhoods is also an enemy of preservation.

See the kind of balls that fighters like Andrew Berman have? BRAVO ANDY!

He speaks up while you Queens drones remain silent...sucking up to your crooked elected officials...out of fear of losing your meager stipends for existence.

And that "stalwart" Queens preservation community run at the first sound of a firecracker report to hide under the bed!

I read an article today (can't find it now) which spoke of some totally non descript, 1950's era 5 story buildings on Manhattan's East Side that were Landmarked because they had significance as being some of the first affordable housing units. Now really....